Belichick and Thielen had been caught on camera hurling expletives at one another after a Patriots challenge, and Van Noy was standing just inches away from the irate wideout at the time.

What was up with that, Van Noy was asked after the game? Was Thielen just frustrated?

Van Noy answered that question with one of his own:

“How many catches did he have?”

The answer was five. Five on 10 targets for 28 yards and a touchdown in Minnesota’s 24-10 loss to the Patriots at Gillette Stadium. Statistically, it was Thielen’s second-worst game of the season, ahead of only the four-catch, 22-yard, one-score showing he had in a Week 9 win over the Detroit Lions.

Thielen entered the weekend ranked first in the NFL in receptions and second in receiving yards, but he was held in check by the Patriots’ secondary. Cornerback Jason McCourty led that charge, tracking the Vikings star around the field for much of the evening.

New England opened the game with Stephon Gilmore and rookie J.C. Jackson outside and McCourty — typically one of the Patriots’ starting boundary corners — in the slot, where Thielen does much of his damage. Playing in the slot is a relatively new experience for the 10-year veteran, who admitted he’s still “learning on the fly” when he’s used in that role.

That unfamiliarity didn’t show against one of the league’s elite receivers, though. When matched up against Thielen, McCourty allowed four catches on six targets for just 19 yards, though he and his brother, Devin, both were in coverage on Thielen’s second-quarter touchdown.

“He had some catches; I just tried to limit him,” Jason McCourty said. “I’m pissed off about the touchdown one. I felt like that was one as a defense we should have been able to stop really with myself on that.”

While McCourty was limiting Thielen, Gilmore was locking down the Vikings’ other star wideout, Stefon Diggs. Diggs, who was a game-time decision with a knee injury, wound up being Minnesota’s leading receiver on the night, but he managed just 53 yards on five receptions, four of which Gilmore wrote off as gimmes.

“He caught one real pass,” the cornerback said. “The other ones were screens. An offensive tackle blocked me.”

McCourty, Gilmore and Jackson combined to allow 15 catches on 20 targets for 80 yards, according to Pro Football Focus.

Cousins finished with 201 passing yards in the loss, his second-lowest total of the season. His 4.57 yards-per-attempt average was a season low, as was his 70.3 passer rating. Cousins also threw two fourth-quarter interceptions — including one to Jonathan Jones in the final minute that iced the game — and was sacked twice.

Multiple Patriots defenders said the team was able to fool Cousins with disguised coverage and creative defensive schemes, including one in which they employed just one down lineman and four safeties.

“You could tell (Cousins) was having a tough time reading what we were doing,” Van Noy said. “We executed really well as a defense.”

Though the defense as a whole turned in one of its best performances of the season, the stars of the night were the defensive backs, whom Van Noy believes are drastically underrated.

“To me, I think we have some of the best secondary players in the league,” the linebacker said. “They don’t get noticed enough. I feel like it’s led by (Devin) McCourty and (fellow safety Patrick) Chung, and then you’ve got one of the best corners in the league right now (in Gilmore), if not the best. He’s the best in my opinion. Steph’s been playing really good football for us.” 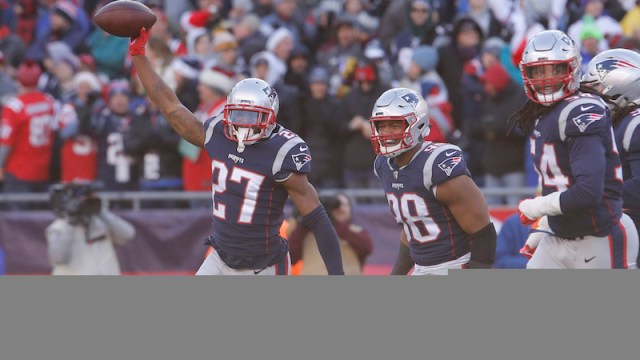