So maybe there will be a noteworthy quarterback taken on Day 1 of the 2019 NFL Draft after all.

With Heisman Trophy winner Kyler Murray throwing his name in the ring, teams desperate for QB help could scramble to the top of the draft to select the 5-foot-9 signal-caller. Murray still could elect to play baseball, but he’s the prototypical passer for the today’s NFL.

With Murray leaning toward football, let’s take a look at NESN.com’s second 2019 NFL mock draft (draft order based on final standings and playoff outcomes through divisional round).

1. Arizona Cardinals — Nick Bosa, DE, Ohio State
Could new head coach Kliff Kingsbury trade Josh Rosen and draft Murray No. 1 overall? Sure, but that seems a little far-fetched at the moment. The Cardinals will take the best player on the board and get a franchise edge rusher to place opposite Chandler Jones, giving Arizona two athletic pass rushers for defensive coordinator Vance Joseph to build around.

2. San Francisco 49ers — Josh Allen, LB, Kentucky
San Francisco fills a need at edge rusher by grabbing the Bednarik and Nagurski award winner who finished the season with 21 1/2 tackles for loss and 17 sacks.

3. New York Jets — Rashan Gary, DE, Michigan
The Jets hired an offensive head coach in Adam Gase, but they’ll go defense first by selecting the 6-foot-5, 280-pound Gary who is athletic, explosive and a nightmare for opposing offensive linemen to try and block.

4. Oakland Raiders — Quinnen Williams, DT, Alabama
Williams might be the most talented prospect on the board after Bosa, and the Raiders use the first of their three Day 1 selections to secure an anchor in the middle of their defense. The Crimson Tide lineman recorded 19.5 tackles for loss, eight sacks and 12 hurries this past season.

5. Tampa Bay Buccaneers — Ed Oliver, DT, Houston
Bruce Arians’ roster needs help across the board, so they might as well take a guy possessing the traits to be a dominant interior pass rusher. Oliver’s explosiveness and elite quickness make him a handful to block one-on-one. And let’s be honest, the Bucs need A LOT of help on defense.

6. New York Giants — Kyler Murray, QB, Oklahoma
We know how this works. First, there were no viable quarterback prospects in the draft and by the time April rolls around there will be three or four going in the first round. With Murray entering his name in the draft, the Giants jump at the opportunity to end the Eli Manning era and pair Murray with electric stars Odell Beckham Jr. and Saquon Barkley. Drafting Murray would send a signal the Giants are entering the new age of wide-open offenses in the NFL.

7. Jacksonville Jaguars — Dwayne Haskins, QB, Ohio State
The Jags finally cut the chord on Blake Bortles and take the Buckeyes star who has great touch, anticipation and powerful arm to drive the ball down the field.

8. Detroit Lions — Clelin Ferrell, DE, Clemson
Matt Patricia needs a pass rush, any pass rush. The Lions draft the 6-foot-4, 265-pound athletic edge rusher who dominated at Clemson and can fit into either a 3-4 or a 4-3 scheme. Ferrell recorded 19.5 tackles for loss and 11.5 sacks this season for the national champion Tigers.

9. Buffalo Bills — Jonah Williams, OT, Alabama
If Josh Allen is the franchise, the Bills must invest in his safe keeping. Williams is quick on his feet and started at both left and right tackle during his time in Tuscaloosa.

10. Denver Broncos — Greedy Williams, CB, LSU
Denver would love if Haskins or Murray fell to No. 10, but if they don’t they’ll take the best corner on the board to beef up their secondary. Williams is an elite corner with the ability to shut down half the field. Pairing the LSU product with Chris Harris should make Denver hard to attack through the air.

11. Cincinnati Bengals — Devin White, LB, LSU
Two LSU players go back-to-back as the Bengals get a much-needed upgrade to their linebacking unit. White is an explosive athlete who is solid in coverage and has a nose for the football. This would be a win for the Bengals.

12. Green Bay Packers — Deionte Thompson, S, Alabama
Thompson did it all this season for Alabama and he’ll bring his ballhawk skills to a secondary that’s sorely in need of a tuneup under new head coach Matt LaFleur. The Crimson Tide safety has great instincts and range which should make him a staple of Green Bay’s defense for years to come.

13. Miami Dolphins — Jeffery Simmons, DT, Mississippi State
The Dolphins can’t pull the trigger on Drew Lock or Daniel Jones, electing instead to take the best remaining player on the board in Simmons. There is some character history with Simmons, but if that checks out, the Dolphins will get a three-down lineman to terrorize the AFC East for the foreseeable future.

14. Atlanta Falcons — Dexter Lawrence, DT, Clemson
There’s no need to sugarcoat it: the Falcons’ run defense was an abomination this past season. Atlanta grabs the 6-foot-4, 351-pound hole-plugger to fix its biggest problem area.

15. Washington Redskins — Drew Lock, QB, Missouri
Jay Gruden and the Redskins get their quarterback of the future in Lock. The talented Missouri signal-caller has all the physical tools to make NFL scouts drool, but might need a year or two of coaching to work out some of the issues with his decision making. Unfortunately, he might not get that time to sit in Washington, as the ‘Skins need a QB to start right now with Alex Smith’s career in jeopardy.

16. Carolina Panthers — Greg Little, OT, Carolina Panthers
Carolina’s offensive line could lose a number of starters this offseason, so they’ll grab a versatile offensive lineman to keep Cam Newton healthy. Little is a good pass protector and has great quickness in the run game, both of which will be huge assets to the Panthers.

17. Cleveland Browns — Trayvon Mullen, CB, Clemson
Pairing Mullen with Denzel Ward would give the Browns one of the best secondaries in the NFL. The long, rangy corner showed he has great instincts both in coverage and as a blitzer against Alabama.

18. Minnesota Vikings — Cody Ford, OT, Oklahoma
The Vikings are set at the skill positions, but they need to find a way to block for Dalvin Cook and protect Kirk Cousins. Enter: Cody Ford. The 6-foot-4, 338-pound Ford can play guard or tackle and would provide a big boost to Minnesota’s struggling line.

19. Tennessee Titans — N’Keal Harry, WR, Arizona State
If the Titans want to see if Marcus Mariota is their franchise quarterback they’ll have to get him someone to throw to other than Corey Davis. The 6-foot-4 Harry is a big body who can go up and get it. He has great size, hands and isn’t afraid to go over the middle to make the tough grab.

20. Pittsburgh Steelers — Deandre Baker, CB, Georgia
The Steelers’ defense needs some work, especially in the secondary. Baker should be able to start for the Steelers on Day 1.

21. Seattle Seahawks — Jachai Polite, DE, Florida
Pete Carroll rebuilt Seattle’s defense on the fly this season, so he’ll add an explosive pass rusher to his defensive line on the first night of the draft. Polite is an elite athlete who has a unique ability to get by blockers. He’ll find a home in Seattle.

22. Baltimore Ravens — Marquise Brown, WR, Oklahoma
The Ravens’ 1970s-era rushing offense flamed out in the playoffs once the Chargers saw it for the second time. John Harbaugh will get Lamar Jackson a No. 1 receiver who can stretch the field from the slot in Brown.

23. Houston Texans — Jawaan Taylor, OT, Florida
One thing wild-card weekend made perfectly clear is the Texans struggle to protect Deshaun Watson. The 6-foot-5 Taylor has the agility to cut off edge rushers and keep the franchise QB clean, which is something Houston desperately needs.

24. Oakland Raiders (via Chicago Bears) — Montez Sweat, DE, Mississippi State
Pairing Sweat with Quinnen Williams on the defensive line would be a Day 1 win for Jon Gruden and Mike Mayock and they still have one pick remaining.

25. Philadelphia Eagles — Yodny Cajuste, OT, West Virginia
With the top-three cornerbacks off the board, the Eagles bulk up their line play by drafting a franchise left tackle in Cajuste.

26. Indianapolis Colts — Christian Wilkins, DT, Clemson
Chris Ballard saw his team still needs help in the pass rush department in the Colts’ AFC Divisional Round loss to the Kansas City Chiefs. Wilkins can play inside or outside and be effective either way. He notched 15 tackles for loss, two sacks and a forced fumble on Clemson’s standout defensive line.

27. Oakland Raiders (via Dallas Cowboys) — Devin Bush, LB, Michigan
Oakland finishes Day 1 by drafting an athletic linebacker who can run with tight ends and rush the passer. Bush is a three-down linebacker who should find a home fast in Oakland … or wherever they are playing their home games next season.

28. Los Angeles Chargers — Jerry Tillery, DT, Notre Dame
LA would love to go offensive line here, but with all the first-round names off the board the Bolts take the 6-foot-7, 305-pound Tillery to join Joey Bosa and Melvin Ingram on what might be the best defensive front in the NFL.

*29. New England Patriots — Noah Fant, TE, Iowa
It’s beginning to look more and more like Rob Gronkowski will be hanging up his cleats at season’s end. But it doesn’t look like Tom Brady has any intention of walking away soon, so Bill Belichick drafts the best tight end in this year’s class. Fant’s athleticism and versatility make him a matchup problem for defenses.

*30. Los Angeles Rams — Johnathan Abram, S, Mississippi State
LA’s secondary needs a facelift, especially if Lamarcus Joyner leaves after this season. Abram is a hard-hitting safety who flies to the ball and can hold his own in coverage.

*31. Kansas City Chiefs — Byron Murphy, CB, Washington
The Chiefs’ secondary was one of the worst units in football this past season, so they’ll grab a corner with great cover instincts in the back end of Round 1. Murphy projects as a slot corner, which fills a huge hole in KC’s defense in the wide-open era of NFL offenses.

*32. Green Bay Packers (via New Orleans Saints) — JJ Arcega-Whiteside, WR, Stanford
Aaron Rodgers will love throwing jump balls to the 6-foot-3 receiver from Stanford. Arcega-Whiteside has great ability to catch 50-50 balls and racks up yards after the catch with his physicality. He tallied 14 touchdowns and 1,059 yards for Stanford in 2018.

*spot in draft based on regular season record 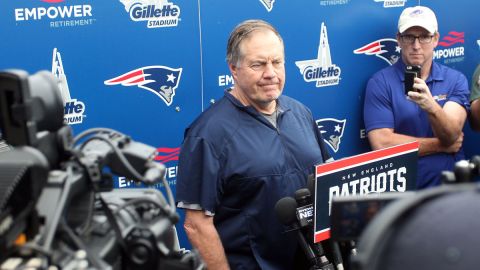 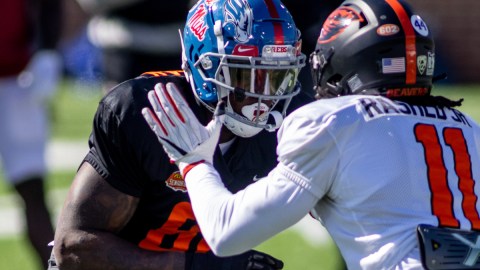