BOSTON — The Boston Celtics weren’t fazed by not having Kyrie Irving for the second game in a row.

With the star point guard sidelined due to a left hip strain, numerous Celtics stepped up as they dispatched the Charlotte Hornets 126-94 at TD Garden.

The first half was a mostly even affair, but a 35-point third period by the Celtics in which they outscored the Hornets by 19 allowed them to take control and put the game out of reach.

Kemba Walker had a team-high 21 points and was one of four Hornets in double figures.

TATUM GETS GOING
The opening quarter mostly was even during the first few minutes, but the Celtics created a little bit of separation in the back half to finish the frame up 35-28.

It was slow-going offensively for both sides over the first 3:20, with the two teams shooting a combined 5-for-16 from the field. After a Celtics full timeout at 5:45, Tatum began to heat up, scoring six points in an 8-2 run over the next 1:45 to put Boston ahead by six.

Tatum throws it down over two defenders! pic.twitter.com/B0aE7jEyuc

The Celtics kept their lead hovered between six and eight points the remainder of the period. Despite the slow start on the offensive end, Boston finished the stanza shooting 62.5 percent from the field while not committing a single turnover.

Tatum led all players with 13 points in the first.

HORNETS CHIP AWAY
Although the Celtics were outscored 31-28 in the second quarter, they went into the half ahead 63-59.

The C’s managed to open up their lead to as many as 11, but an 11-0 run by the Hornets over 2:01 allowed them to tie the game with two minutes left in the half. The two teams traded punches in the final couple minutes of the second, with Rozier capping the first 24 minutes off by draining a step-back 3-pointer with two seconds left to up Boston’s lead to four entering the break.

Brown and Malik Monk each had 10 points in the second quarter. Tatum and Brown shared the game-high in first-half points with 15.

C’S GO NUTS
After a mostly narrow first half, the C’s started deluging points on the Hornets in the third quarter, outscoring the visitors 35-16 in the frame to take a 98-75 lead into the fourth.

With their advantage sitting at six at the midway point of the third, the Celtics started created some breathing room by dropping 11 unanswered points to bring their lead up to a comfortable 17 with 2:52 remaining.

The Celtics outscored the Hornets 20-3 in the final 5:55 of the quarter while throwing down numerous highlight-reel dunks down in the process, with this Rozier-to-Tatum alley-oop sending the Garden into a frenzy.

Rozier dropped 10 points in the third quarter. Walker and Brown paced all players with 21 points apiece through 36 minutes.

BOSTON CRUISES TO FINISH
After a pretty demoralizing third quarter, it was clear the Hornets didn’t have much fight left in them. Boston outscored Charlotte 28-19 to put the game to bed.

PLAY OF THE GAME
Tatum wasn’t the only one throwing down lobs from Rozier.

UP NEXT
The Celtics will head to New York for a tilt with the Knicks on Friday. Tip-off from Madison Square Garden is set for 7:30 p.m. ET. 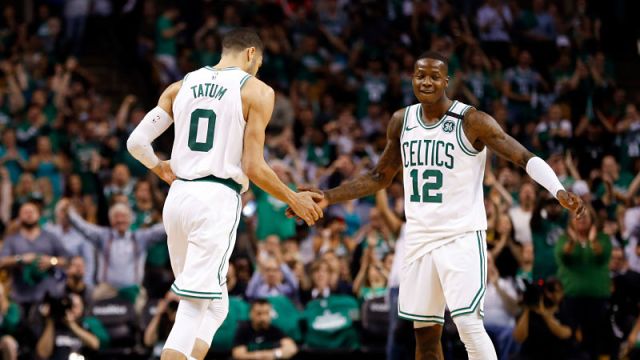