Heading into the 2018 NFL Draft, hopes were high the New England Patriots could concurrently acquire instant-impact players and a quarterback of the future with two first-round picks, two second-round picks and a third-rounder.

It … didn’t exactly go that way.

Here’s how the Patriots’ actual draft picks fared this season:

Round 1, Pick 23: OT Isaiah Wynn
Wynn likely would have started the season as the Patriots’ top backup offensive tackle unless he beat out Marcus Cannon for the right tackle job. Instead, he tore his Achilles in the preseason and missed his rookie year. Brown, Cannon and the entire Patriots’ offensive line performed well without him.

Round 1, Pick 31: RB Sony Michel
Michel ultimately finished his rookie season with 209 carries for 931 yards, averaging 4.5 yards per carry, with six touchdowns in 13 games. He had some ups and downs, but overall it was a net positive.

He never became heavily involved in the Patriots’ passing game, but he also missed most of training camp and the preseason. He’ll likely take on a great role receiving and blocking next year with the playbook locked down.

Round 2, Pick 56: CB Duke Dawson
Dawson began the season on injured reserve with a hamstring injury that hampered him most of the summer. He came off IR on Nov. 13 but was a healthy scratch for the rest of the season. It’s highly improbable, barring a rash of injuries, Dawson makes his NFL debut in the playoffs.

He’ll compete for the Patriots’ slot cornerback role next summer.

Round 5, Pick 143: LB Ja’Whaun Bentley
Bentley had a strong start to the season but hit IR prior to Week 4.

Bentley looked like the Patriots’ future starting middle linebacker through three games. The Patriots will hope he can pick up where he left off next summer.

Round 6, Pick 178: LB Christian Sam
Sam didn’t make much of an impact in the summer and hit injured reserve before the 2018 season began. He’ll compete for a roster spot next summer.

Round 6, Pick 210: WR Braxton Berrios
Can we just say ditto? Berrios caught just one pass this summer then hit IR. If he’s the Patriots’ slot receiver of the future, he has some work to do this offseason.

Round 7, Pick 219: QB Danny Etling
Etling was cut out of preseason and latched on with the Patriots’ practice squad, where he’s been all season. It’s unlikely Etling is the Patriots’ starting quarterback of the future, but he might be their backup.

Round 7, Pick 243: CB Keion Crossen
Crossen played 11 games this season and registered 14 tackles, seven of which came on special teams.

He let up seven catches on seven targets for 97 yards in 39 total defensive snaps, according to Pro Football Focus.

Round 7, Pick 250: TE Ryan Izzo
Izzo caught three passes for 15 yards in the preseason and was placed on injured reserve before the season began.

CB JC Jackson
Jackson, so far, is the crown jewel of the Patriots’ 2018 rookie class. He played 13 games, starting five and let up just 22 catches on 42 targets for 262 yards and no touchdowns with three interceptions for an NFL-best 42 passer rating allowed.

He’ll enter next summer as a favorite to earn a starting cornerback spot opposite Stephon Gilmore.

WR Darren Andrews
Andrews has spent his entire Patriots tenure on the non-football injury list after tearing his ACL last summer at UCLA. He had 60 catches for 773 yards with 10 touchdowns in nine games with the Bruins and is a player to watch next summer.

DE Trent Harris
Harris spent all season on the practice squad after an impressive preseason in which he registered two sacks, a QB hit and 10 hurries, according to PFF.

DT Frank Herron
After spending the summer with the Patriots, he was signed to their practice squad in October. He’s been there ever since. 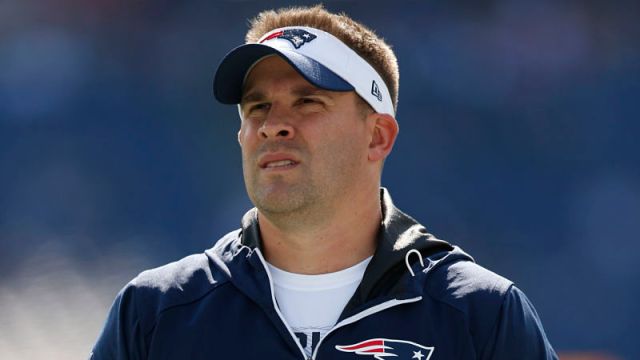 Is Packers’ Job Only Way Josh McDaniels Will Leave Patriots?