After yet another historic postseason performance, talk of wide receiver Julian Edelman one day being inducted into the Pro Football Hall of Fame is gaining traction.

Let’s save that conversation for later, though it does have some merit. Instead, let’s put Edelman’s unbelievable career postseason numbers into perspective.

With 44 yards in Super Bowl LIII, Edelman will vault up to second all-time behind Jerry Rice in both postseason receptions and receiving yards.

Now, let’s do some math. Prior to becoming an integral piece of the Patriots’ offense, Edelman had nine receptions for 75 yards with two touchdowns in five postseason games. Let’s subtract those from Edelman’s playoff totals for a moment. That leaves Edelman with 96 catches for 1,196 yards with three touchdowns in 12 postseason games since becoming a full-time starter.

So, this isn’t just about Edelman racking up a ton of receiving yards because he’s played in a lot of postseason games. Edelman actually ranks 13th among wide receivers in playoff appearances. He played in as many postseason games as former Tennessee Titans and Baltimore Ravens wide receiver Derrick Mason and has more than twice as many receptions and yards.

Edelman, Irvin and Rice are tied for most 80-yard postseason games with 10.

If you haven’t noticed, postseason Edelman ranks among a bunch of players already in the Hall of Fame or surefire first-ballot selections. He definitely doesn’t have the regular-season numbers usually required for entry into the Pro Football Hall of Fame, but neither did Kurt Warner, Troy Aikman, Joe Namath, Terrell Davis or Lynn Swann.

There’s a case to be made for Edelman, especially if he can put together another hall-worthy performance in Super Bowl LIII, even if he’s never made a Pro Bowl or All-Pro team.

He’s unquestionably one of the greatest postseason performers in NFL history. And that should be more important than regular-season merits, right? 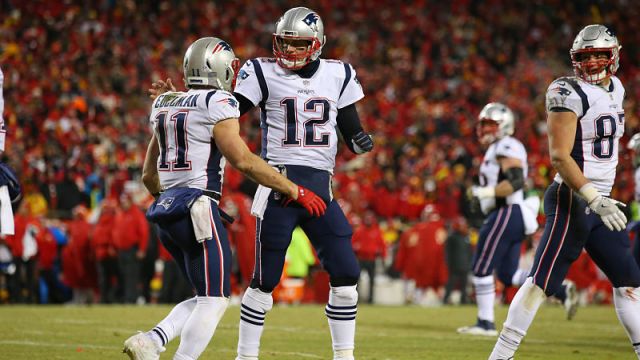 Bart Scott Scoffs At Thought Of Patriots Being Underdogs In Playoffs