So, the Patriots moved Jackson over to shadow wide receiver Sammy Watkins, while cornerback Stephon Gilmore took on Kelce. Kelce had three catches on four targets for 23 yards with a touchdown up to that point. Kelce was blanked on one target after Gilmore switched to cover him. The Patriots beat the Chiefs 37-31 to advance to Super Bowl LIII against the Los Angeles Rams.

So, how tough was it for Gilmore to adjust halfway through a game?

Gilmore didn’t prepare for Kelce all week. He didn’t study him. He didn’t know he’d be switching until Patriots head coach Bill Belichick, linebackers coach Brian Flores and cornerbacks coach Josh Boyer all told him the change was being made.

“I was just able to adjust,” Gilmore said. “It’s easier because I’m used to covering fast guys. He’s not really fast, so it’s easier for me.

“I’m not really worried about him going deep on me.”

Despite Gilmore acting like he was being moved over to cover Matthew Mulligan or Michael Hoomanawanui, know that Kelce is actually really, really good. He caught 103 passes for 1,336 yards with 10 touchdowns in the regular season. He’s a two-time first-team All-Pro and four-time Pro Bowl selection.

“I was happy because they were throwing him the ball,” Gilmore said. “So, anytime someone’s getting the ball, you want to be in that position to make plays on the football.”

Despite his lack of preparation, Gilmore knew how to play Kelce, and it wasn’t with physicality.

“Nah, he likes to push off a lot,” Gilmore said. “I probably use my feet a lot more and beat him to the spot because he wants you to get physical with him. I wouldn’t allow that.”

Gilmore is soft-spoken and reserved. In the week leading up to a game, he gives mostly Patriots-like boilerplate answers. But after games, he tends to give at least one gem about a receiver pushing off or playing dirty. This game obviously was no different.

In all, Gilmore let up one catch on four targets for 54 yards. The only reception he allowed was to Watkins on a play quarterback Patrick Mahomes extended with his legs.

“It took a lot of time,” Gilmore said. “I looked in the backfield. He ran a dig route, took it up and he threw it off his back foot all the way across the field, so hats off to him.” 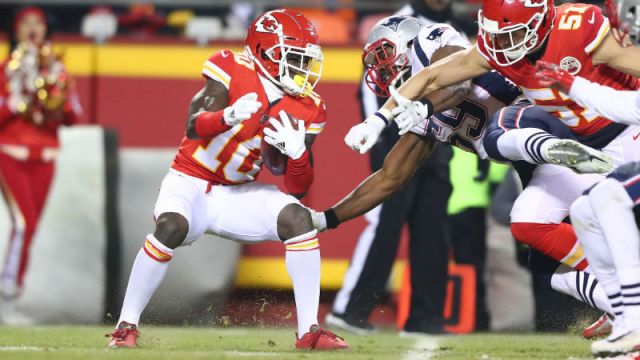 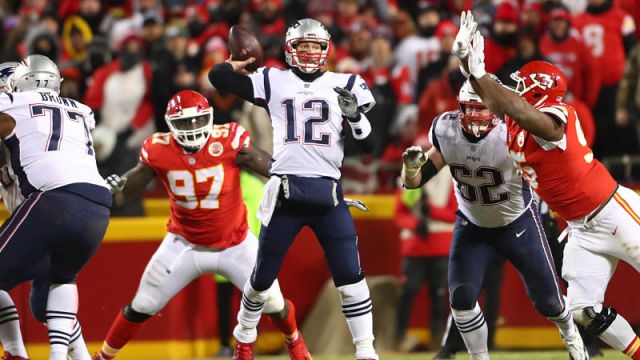