BOSTON — Make that 14 straight games the Boston Bruins have secured at least a point.

Boston dismantled the San Jose Sharks after scoring three unanswered goals in the second period en route to its 4-1 victory at TD Garden on Tuesday night.

There was no shortage of entertainment throughout the matchup between goals, fights and the B’s coming out on top.

ALL EVEN AFTER 20
The Bruins came out hot and peppered Jones with six shots in the opening five minutes of the first. The B’s found themselves on the power play when Justin Braun was whistled for slashing with 14:19 left in the period.

Boston couldn’t capitalize and found itself in a 1-0 hole at the 12:47 mark when Couture jammed the puck past Halak after a bad giveaway by Zdeno Chara.

If it's in, it's in! pic.twitter.com/jINKxtAwJ1

A scary moment unfolded when DeBrusk took a stick to the face and went down the tunnel bloodied. DeBrusk quickly returned to the ice with one less tooth, and Boston netted the equalizer just nine seconds into the four-minute power play when Krejci hammered home a one-timer from Torey Krug to make it 1-1.

That's No. 15 for 46.#NHLBruins pic.twitter.com/YtSBYoU2fD

Boston took a 16-8 shot advantage into the middle frame.

THREE-GOAL SECOND
Boston took the lead nearly halfway through the second when McAvoy roofed a wrist shot past Jones for a 2-1 edge.

It didn’t stop there for the Bruins, as DeBrusk got in on the fun just 37 seconds later with his 20th goal of the season on what very well could be the goal of the campaign. After some sweet triangular passing in front of the net, the red-hot winger sent a backhanded puck past Jones for a two-goal advantage. Johansson was credited with the assist, giving him his first point in a Bruins uniform.

The Sharks had a chance to get back in it on the power play but instead allowed the B’s to take a three-goal lead. Marchand absolutely undressed Erik Karlsson before finding twine on a backhand shot.

John Moore went to the box with 1:35 remaining in the second when he was whistled for cross-checking, but Boston was able to keep the three-goal lead intact.

B’S LOCK UP WIN
Things got chippy in the third when Evander Kane and Chara dropped the gloves after Kane slammed Chara to the ice from behind. Kane was given a game misconduct, a fighting major and an instigating penalty that prematurely ended his night.

No goals were scored, but enough damage had been done to secure the win for Boston.

UP NEXT
The Bruins continue their homestand with a crucial Atlantic Division matchup Thursday when they welcome the Tampa Bay Lightning to TD Garden. Puck drop is set for 7:30 p.m. ET. 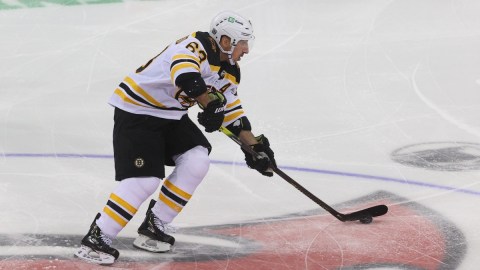