The Feb. 25 NHL trade deadline is fast-approaching, and all signs point to the Boston Bruins making a deal.

The question, of course, is who will Don Sweeney, Cam Neely and Co. target?

Sweeney has been open about scanning the trade market all season. During a press conference to announce Davis Pastrnak’s thumb injury, the Bruins general manager confirmed he’s looking for third-line help and a top-six winger.

There are plenty of players around the league who fit that bill, but the Bruins reportedly are eyeing three in particular: Columbus Blue Jackets winger Artemi Panarin, Philadelphia Flyers forward Wayne Simmonds and New York Rangers winger Mats Zuccarello.

Sportsnet’s Elliotte Friedman on Tuesday published a piece containing 31 thoughts on the NHL, including trade rumors.

Here’s what he wrote about the 27-year-old Panarin, who’s in the last year of his contract and has 24 goals and 43 assists this season for the Jackets:

“I think the teams with the best chances at signing Panarin long-term are Florida, Los Angeles, the Islanders and the Rangers. The only one that makes sense to take a shot at him for rental purposes is the Islanders.

“Boston hovers as a rental option, too. If the Islanders don’t get their top choices, GM Lou Lamoriello could consider old acquaintance Ilya Kovalchuk. Remember, the winger has control over his destination.”

And on Zuccarello (31) and Simmonds (30), both of whom are in the final years of their deals:

“Zuccarello and Wayne Simmonds may have to wait until the (Matt) Duchene/(Mark) Stone/Panarin situations settle. A mix of similar teams looking at both: Boston, Calgary, San Jose, maybe Pittsburgh and Vegas. New Jersey GM Ray Shero was aggressive with Brian Boyle, and it sounds like he’s done the same with Marcus Johansson. I’ve heard Columbus, Edmonton, San Jose and Vancouver as teams who have checked in.

“Possibly Washington, too, since they know him. The Canucks are the odd fit, but they looked at Andre Burakovsky, too. So maybe they are thinking about something for the future or are trying to replace the injured Sven Baertschi.”

For what it’s worth, Zuccarello has 11 goals and 26 assists, while Simmonds has 16 tallies and 11 dimes.

There’s no doubt the Bruins could use some help on offensive, especially with the uncertainty surrounding Pastrnak’s injury. But if Bruce Cassidy’s club continues to get scoring help from its secondary units, as it did Monday night against the San Jose Sharks, the Bruins might not need to be ultra-aggressive at the trade deadline. 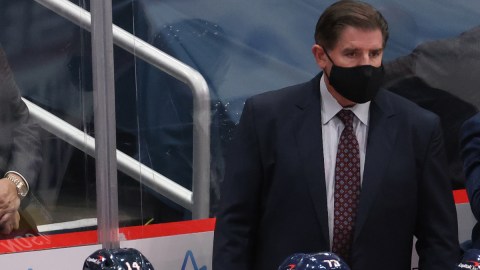