BOSTON — Rajon Rondo hadn’t hit a game-winning shot in his NBA career. He might have hit one in middle school, maybe.

The Los Angeles Lakers point guard entered Thursday’s game against the Boston Celtics a dreadful 0-for-11 on potential game-winning shots over the course of his 12-plus seasons in the league.

It only was natural that lucky No. 12 came on the same floor Rondo helped the Celtics win an NBA title on 11 years ago against the team he now helps lead. A floor he grew up on while becoming one of the game’s premier floor generals.

With 11.5 second and the Lakers trailing by one, Brandon Ingram sprinted down the right side of the court, beat his man and had a clear path to finish a game-winning layup. Al Horford appeared to stick his hand through the hoop to block the shot, but no whistle was blown. Tyson Chandler batted the ball back out where the veteran point guard was waiting. Rondo snatched up the ball, turned and fired a mid-range jumper. The ball ripped the TD Garden net and the hearts of Celtic fans everywhere as the buzzer sounded.

“Just get it up, basically,” Rondo said on what was going through his mind during the waning moments of the Lakers’ 129-128 win. “I practice those shots all the time, but I just couldn’t imagine it being here in the Garden, though. It’s surreal. It’s unbelievable. Obviously, the man upstairs, give him a lot of credit. I work on my craft, but at the end of the day, I couldn’t have done it without him.”

Rondo was mobbed by his teammates after the shot went through, a telling sign of how much the beleaguered Lakers needed a W after their recent turmoil.

Kevin Garnett, Rondo’s former Celtics teammate, was sitting courtside wearing his jersey and had some words for his friend after the shot went through, although the veteran point guard couldn’t hear what the Big Ticket was shouting.

The “surreal” moment had everything.

“Believe it or not, I always dream like that,” Rondo said in his postgame interview with TNT. “But I couldn’t picture it being this sweet. Coming back home, 13 years in, where it all started.”

Rondo, now 32 years old, received a hero’s welcome from the TD Garden faithful despite wearing dreaded Laker Gold instead of the Celtic Green he sported while helping Boston defeat LA to win the franchise’s 17th title.

The Lakers, who trailed by 18 in the second quarter, desperately needed a win to pull them out of their recent tailspin and Rondo’s heroics just might be the juice the young Lakers need to propel them to a deep playoff run.

A Celtics hero of championship past, Rondo exited the Garden with his son, who was wearing his dad’s No. 9 Lakers jersey and holding the game ball, now as a hero to Boston’s hated rival.

A surreal sight, it certainly was. 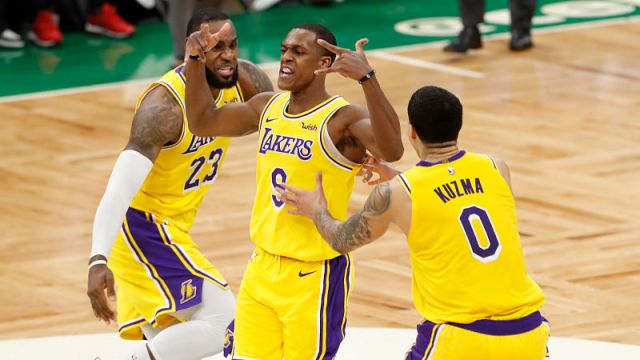