Trent Brown was a godsend for the New England Patriots in 2018, seamlessly replacing Nate Solder and starting every game at left tackle for the Super Bowl LIII champs.

Protecting Tom Brady’s blind side is among the most high-profile jobs an NFL offensive lineman can hold. Now, with the season over and the start of free agency rapidly approaching, Brown is in the spotlight for a different reason.

As arguably the best offensive tackle available this spring, the 6-foot-8, 380-pounder is set to cash in on the open market and could be one-and-done in New England.

Would Brown like to re-sign with the Patriots? He addressed that topic and free agency in general Monday during an appearance on “The Adam Schefter Podcast.

?That?s definitely something I would love,” Brown told the ESPN insider. “But hey, we?re going to cross that bridge when we get there.”

Brown, who raved about Brady and Patriots offensive line coach Dante Scarnecchia on the podcast, explained in broad terms what he’ll be looking for from potential suitors once free agency opens March 14.

?Hopefully, it?s somewhere where I can build some longevity, somewhere that?ll be a great place and great fit schematically, in the locker room, on the field and also a great fit for my family, as well,” he said.

After making a modest $1.9 million this season in the final year of his rookie contract, Brown is in line for a massive pay raise. For context, Solder signed a four-year, $62 million deal with the New York Giants last offseason, and he was 29 at the time. Brown will be 26 when the 2019 season begins, and his 2018 campaign was stronger than the one Solder put together in his final season with the Patriots.

?Ever since I got drafted in the seventh round (in 2015), I felt like that was definitely lower than expected and lower than I ever wanted to go,” Brown said. “It all happens for a reason, but I felt disrespected by it, and I?ve been waiting for this time for a long time now. I?ve been putting in the work, busting my (butt). I took a week-and-a-half off (after the Super Bowl), and I?m already back to training, because I definitely don?t want people to feel like, ?Oh, he?s going to get paid and then get lazy.? No. I want to continue to win. I want to continue to get better, and I want to continue to chase my goals.?

Brown used his platform on Schefter’s podcast to sell himself to teams who might be in the market for a new tackle. Asked if there’s a better pass protector in the NFL than him, Brown replied: “No, sir.”

?I?m an athlete with a huge frame, and I can move just as well as a guy who?s 6-3, 320,” Brown said. “And I move a lot better than those guys in some cases — most cases, I?d say. I credit that to my dad for not allowing me to play with kids my age when I was growing up.

“I always played with age groups above the age of my own and then finding out that some of those kids were actually way older than I was. I remember I was 5, and some of those kids were in middle school already. A lot of times, that kind of stuff goes on in little league football. I?m sure you?ve heard how the birth certificates get fudged and all that stuff. But growing up, I was always a skill player, and I just started playing offensive line when I got to high school, really.”

If Brown does sign elsewhere this offseason, the Patriots will look to 2018 first-round draft pick Isaiah Wynn to fill the void. Wynn, who was expected to challenge Brown for the starting left tackle spot last summer, missed his entire rookie season after tearing his Achilles in a preseason game.

Is Kyrie Irving Recruiting Kevin Durant In This Behind-The-Scenes Video? 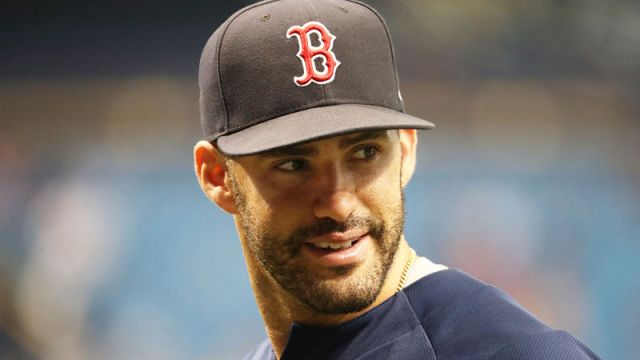 J.D. Martinez Opens Up About Red Sox Future: Will Slugger Opt Out Of Contract?