The Portland Trail Blazers landed in Boston on Tuesday ahead of their game against the Celtics on Wednesday at TD Garden.

After practicing at nearby Emerson College, several Trail Blazers got stuck in an elevator in the college’s athletic facility for nearly a half hour.

Luckily for us, center Enes Kanter captured chunks of the “traumatic” experience on video.

Stuck in the elevator with the squad ??â€â™‚ï¸ ? @trailblazers pic.twitter.com/2Yu5zrdFfH

Being stuck in an elevator is right up there among biggest fears for a lot of people, and it’s pretty clear that some of the Trail Blazers weren’t exactly laughing over the incident. And Twitter had a field day with posting screengrabs of the players’ distressed faces and joking at their expense.

Yeah but did you establish the pee corner?!? pic.twitter.com/2XbH719Nf2

The Trail Blazers eventually were rescued, and Emerson College released a statement on the matter, via Boston.com’s Nicole Yang.

Statement from Emerson on the Trail Blazers getting trapped in an elevator ends with: "The College apologizes for the disruption and hopes the team takes it easy on the Boston Celtics tomorrow night." https://t.co/SPOGLVZ5M2 (correct link!) pic.twitter.com/a93FpQZdMC

The Celtics will be on the backend of a back-to-back Wednesday, just a day off an all-important matchup against the Toronto Raptors on Tuesday at Scotiabank Arena. So maybe the elevator scare was enough to spook the Trail Blazers off their game.

Get in on the action and bet on basketball atÂ Skybook.ag. 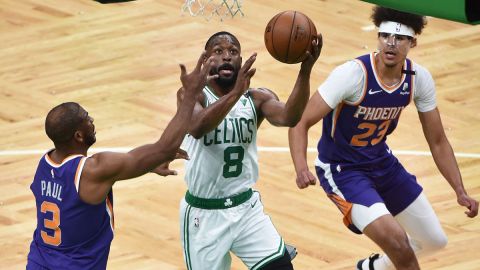