For the second night in a row, the Boston Celtics allowed an opposing player to go off for a monster performance. And for the fourth game in a row, the Celtics came up short, falling to the San Antonio Spurs 115-96 on Sunday night at TD Garden.

Just one day after the Celtics allowed Kemba Walker to drop 18 in the fourth quarter in a loss to the Charlotte Hornets, LaMarcus Aldridge torched the C’s, going off for 48 points and 13 rebounds in an utterly dominant performance from start to finish.

Marcus Smart led the Celtics with 14 points while Kyrie Irving had 11 points and 12 rebounds. Gordon Hayward, in his return from the NBA’s concussion protocol, had 13 points. Marcus Morris also finished with 13 points, while Daniel Theis (11) also was in double figures.

ALDRIDGE CHECKS IN
The Celtics found themselves in an early hole thanks to Aldridge who went off for 19 points in the first quarter as the Spurs took a 31-24 lead.

It was a back and forth opening stanza, with the teams trading the lead six times over the opening 12 minutes.

The sides were knotted at 18 with Guerschon Yabusele draining a pair from the charity stripe with 3:39 to play. But the Spurs closed the quarter on a 13-6 run, sparked by an and-one from Aldridge.

Make that 17 PTS in the first for @aldridge_12! pic.twitter.com/bEwpiaKuRO

Morris led the Green with eight points in the first.

SPURS KEEP PACE
The Spurs were able to keep the Celtics an arm’s length away through the second quarter, taking a 54-47 lead into the break.

Hayward got off to a strong start in the second quarter, hitting a layup, a jumper and four free throws, the second pair making it 38-32 Spurs with 8:48 remaining in the half.

But the Celtics could not narrow the deficit from there, with a fadeaway from Rudy Gay and an Aldridge jumper from the elbow giving the visitors a 48-36 cushion with 5:57 to play.

Boston would get things back to single digits, with Hayward hitting a runner and converting on the three-point play to make it 54-47 with a minute left in the half.

Aldridge had 25 points at the half, while Morris led the C’s with 13.

GROUND TO MAKE UP
Boston could not gain any ground in the third, getting outscored 30-25 as the Spurs took an 84-72 lead into the fourth.

Irving, who had just six points at halftime, brought the Celtics within seven, their smallest deficit since the first quarter with a nice crossover and drive to the basket. He assisted on a Smart floater on the following possession that made it 58-53 with 8:36 to play in the quarter.

But San Antonio built its lead back up to double figures, using a 13-2 run to lead 77-62 with 3:47 left in the third after DeMar DeRozan sunk a jump shot from the elbow to give the Spurs their biggest lead of the night.

Theis kept it a 10-point game with three-straight baskets for the C’s.

Theis hammers it home off the nice dish from Irving! pic.twitter.com/kpndOI0glh

Aldridge continued his dominance, leading all scorers with 36 points after three.

NO COMEBACK HERE
The Celtics had little to offer in terms of a comeback attempt in the fourth.

Brad Stevens emptied his bench at that point, with the C’s well on their way to their fourth straight loss.

PLAY OF THE GAME
Smart doing what he does best.

UP NEXT
The Celtics will hit the road to face the lowly Cleveland Cavaliers on Tuesday. Tip-off from Quicken Loans Arena is slated for 7 p.m. ET. 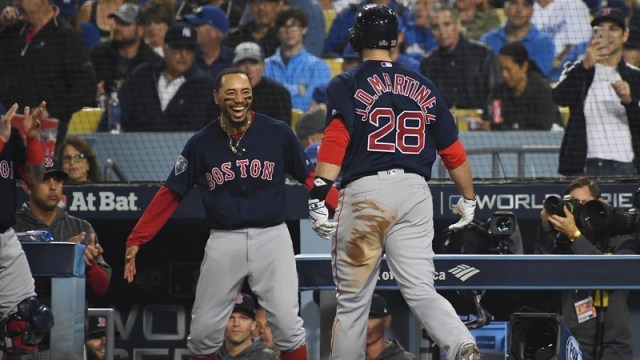