Patriots Mailbag: How To Feel About Current Lack Of Wide Receiver Depth - NESN.com Skip to content

For the ninth offseason in a row, New England Patriots fans are losing their collective minds over Bill Belichick’s disregard for the wide receiver position.

So, let’s kick off the mailbag easing some distress.

Do you feel confident in the receiving corps if there are no more veteran additions, and only draft picks? Obviously this is pretty vague, but just curious. Cheers!
— @jonothorpejazz
No, but there’s a difference between concern and panic, disdain or scorn.

It’s completely fair to be concerned about the Patriots’ current wide receiver corps.

So, yeah. You don’t want Phillip Dorsett as your No. 2 nor Bruce Ellington and Maurice Harris in line for serious snaps.

The Patriots could add some serious pass-catching talent through the draft, but rookie wide receivers don’t have a strong track record in New England. Aaron Dobson and Kenbrell Thompkins are two of the four best rookie receivers to play with quarterback Tom Brady.

Adding a player like Jordy Nelson, Dontrelle Inman or even Hogan would add a level of certainty. And it would be surprising if the Patriots didn’t make some move to add a dependable veteran wide receiver.

The Patriots tend to figure these things out. It’s OK to be cautious about the Patriots’ current receiver corps. But calm down for now. As CBS Sports’ Jon Rothstein likes to say, “THIS IS MARCH.”

More on the receivers:

Are the Patriots going to trade for a premium WR even though they have very little in cap space? #MailDoug
— @patriotsnews247
It’s going to be tough. A lot of people just assume the Patriots are going to make a trade for a top-tier receiver, but they currently have around $8.2 million in cap space after reportedly restructuring Stephon Gilmore’s contract. That’s enough to sign their 2019 draft class and carry more than $5 million into the season, as they like to do.

Extending Tom Brady’s contract could free up another $5 million in cap space. They still need a kicker (Stephen Gostkowski?) and two offensive tackles on top of receiving help.

If the Patriots can convince the New York Giants to trade Sterling Shepard, that would be a boon. He’s only making $1.26 million in 2019.

Unless he was willing to take a significant pay cut, I don’t really know how the Patriots could make a deal for a player like A.J. Green work. His base salary is almost $12 million. A trade for Tyler Boyd could certainly be done, but why would the Cincinnati Bengals deal him?

It will be fascinating to see how the next five-plus months shake out.

Nick Caserio is at the WVU pro day. Thoughts on Grier with the Pats?
— @proudblackmatt
I think Will Grier is a good fit. He’s a bit undersized at 6-foot-2, 217 pounds and doesn’t have the biggest arm in the draft, but he’s very accurate.

I actually like a lot of the mid-tier quarterbacks in the 2019 NFL Draft. Grier, North Carolina State’s Ryan Finley and Boise State’s Brett Rypien are all pretty similar and intrigue me as prospects.

Buffalo’s Tyree Jackson is a completely different type of signal-caller. He’s tall, has a big arm and runs well. His biggest issue is accuracy.

Left tackles can come in all shapes and sizes. The Patriots wouldn’t have drafted Wynn to play tackle if they didn’t think he could play tackle. And if he can’t? Then he can play left guard next season after Joe Thuney (likely) departs in free agency. The Patriots will add more tackles before September.

As of now, how do you rank the AFC East and thus who do you think presents the biggest challenge for the Pats?
— @marcoandhispolo
The Miami Dolphins have to be last. They seem intent on tanking, which I think is a pretty good idea for the 2019 season. The Dolphins have to get worse before they can get better with Brian Flores as head coach. Signing Ryan Fitzpatrick is a pretty good first step.

The Patriots are definitely still first. There should be no doubt about that as reigning Super Bowl champions.

I’d put the New York Jets second and the Buffalo Bills a close third. I just think Sam Darnold is a better quarterback than Josh Allen. The rest of their teams are pretty close.

I’m also not sure if either team is as improved as they’re being given credit for.

Which skill position you think is addressed at #32?
— @TornAchillesJim
I think the Patriots either take a pass-catcher or defensive lineman with the 32nd overall pick. I’d order the positions, 1. defensive end, 2. tight end, 3. defensive tackle, 4. wide receiver.

Sort of a question but Lol I just have this strong ugly annoying feeling an O-lineman will be drafted first by us
— @ChVckEatsAhh
I don’t think it’s out of the realm of possibility. The Patriots need two backup offensive tackles. One of those guys will probably be Marcus Cannon’s successor. They also will need a guard if Thuney departs in free agency. Offensive line shouldn’t be an immediate need as far as a starter is concerned in 2019. But they do need pieces for 2019 and beyond.

What about Suh on a 1-year deal? Possibly, Blount?
— @DanielF29405641
Only if Ndamukong Suh wants to sign for cheap to win a Super Bowl.

Now that you’re apart of Meme Twitter who is your favorite meme?
— @AyyyItsAdam
Me.

What type of numbers will Gordon put up if he stays on the field for 16 games?
— @InvalidBoxout
I just want to caution Patriots fans not to put too much of their hopes and dreams on Josh Gordon, which is something I’ve seen far too much on Twitter lately. Gordon is still suspended. And he’s no guarantee to play an entire season even if he gets reinstated.

You excited for WrestleMania?
— @josifus77
I actually am. The Kofi storyline is really fun.

@DougKyed think trading for Josh Rosen is a possibility? #MailDoug
— @mileswood
I continue to think it makes way too much sense. The Arizona Cardinals will need to commit to drafting Oklahoma quarterback Kyler Murray before they actually make a trade, however.

If Brady misses OTAs this year should we give up on the season immediately?
— @CastigFan1337
Of course. His decision to skip OTAs last season clearly was calamitous.

What would be the perfect final play of Brady?s career? (I?m thinking a TD completion to Slater.)
— @Taghkanic
A 99-yard QB sneak TD.

Any chance for a veteran OT in FA? (Penn, Veldheer, Parnell, Schraeder) #MailDoug
— @isaacdobles
I don’t hate the idea, but he’d have to be willing to back up Wynn and Cannon in 2019.

Will Gillette Stadium need construction to raise the 2018 SB Banner. I believe this was an issue last SB win.
— @rankjas
No. They wisely accounted for more banners during the 2017 offseason construction. 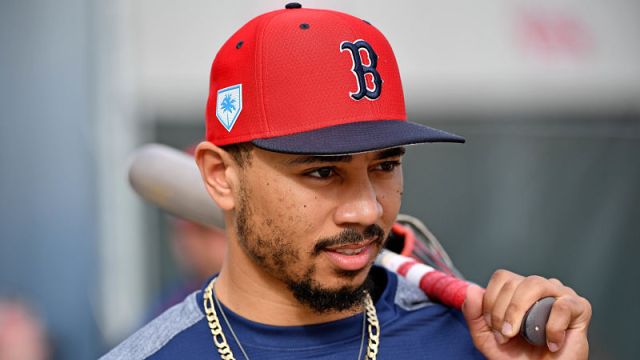