With the 2019 NFL Scouting Combine concluded, we now have a better sense of which players might interest the New England Patriots in the NFL Draft.

We didn’t make any trades in our second mock draft of the offseason, electing to use all 12 picks.

Here’s what we came out with:

First round, 32nd overall: DL Jerry Tillery, Notre Dame
The Patriots need more defensive line help whether they bring back defensive end Trey Flowers or not. If Flowers returns, then Tillery can play five-technique across the line or defensive tackle in the middle of the Patriots’ defense. If Flowers departs in free agency, then Tillery can begin to help fill in for the talented edge defender.

At 6-foot-7, 295 pounds, the Patriots haven’t had a defensive lineman with Tillery’s body type and athleticism since Tommy Kelly and Richard Seymour before him. Tillery ran a 4.95-second 40-yard dash at the NFL Scouting Combine.

Second round, 56th overall: S Chauncey Gardner-Johnson, Florida
Gardner-Johnson showcased versatility with the Gators, playing in the box and back deep at free safety. With Devin McCourty and Patrick Chung getting up there in age, the Patriots need safety help all over the field. They already went to the Florida defensive back well twice last year, picking up Duke Dawson and JC Jackson. With a 4.48-second 40-yard dash and 7.03-second three-cone, Gardner-Johnson has classic measurables for a Patriots safety.

Second round, 64th overall: OT Kaleb McGary, Washington
Yes, the Patriots just drafted Isaiah Wynn in the first round of the 2018 NFL Draft. But Marcus Cannon will be 31 years old this season, and the Patriots could use some insurance at the position.

Third round, 73rd overall: QB Ryan Finley, North Carolina State
For the second time in four years, the Patriots draft an NC State quarterback in the third round. What Finley lacks in arm strength, he makes up for in accuracy and smarts.

Third round, 97th overall: TE Jace Sternberger, Texas A&M
After missing out on Iowa tight ends Noah Fant and T.J. Hockenson in the first round, the Patriots grab a versatile tight end with some athleticism on the second day of the draft. Sternberger has experience blocking and caught 48 passes for 832 yards with 10 touchdowns in 2018.

Third round, 101st overall: DE Anthony Nelson, Iowa
Nelson has great size and length at 6-foot-7, 271 pounds that the Patriots can mold at defensive end. He’s ranked as CBS Sports’ No. 116 prospect. After testing well at the combine with a 6.95-second three-cone and 4.23-second short shuttle, will he last that long?

Fourth round, 134th overall: WR David Sills, West Virginia
The former high school and college quarterback has what it takes to learn the Patriots’ complex offense. He’s not as fast as the Patriots typically like their receivers, but he ran a 6.97-second three-cone drill with a 37.5-inch vertical leap at 6-foot-3, 211 pounds.

Sixth round, 205th overall: DE Maxx Crosby, Eastern Michigan
He might need some grooming, but he’s got tons of upside with 18.5 sacks in his last two seasons. He destroyed the combine with a 6.89-second 3-cone drill and 4.13-second short shuttle.

Seventh round, 239th overall: RB James Williams, Washington State
He had 202 receptions, including 83 as a junior, in three seasons with the Cougars. The biggest issue is he’s undersized at 197 pounds.

Seventh round, 243rd overall: LB Ty Summers, TCU
Summers is the type of head-on linebacker the Patriots typically value more than most teams.

Seventh round, 246th overall: OLB Justin Hollins, Oregon
Hollins played on the edge at Oregon. Why not see if you can turn him into a linebacker in the pros? He has the athleticism. He ran a 4.5-second 40-yard dash at 6-foot-5, 248 pounds.

Seventh round, 252nd overall: CB Ken Webster, Mississippi
A cornerback with a 4.4-second 40-yard dash and 6.8-second three-cone? That’s exactly what the Patriots like. 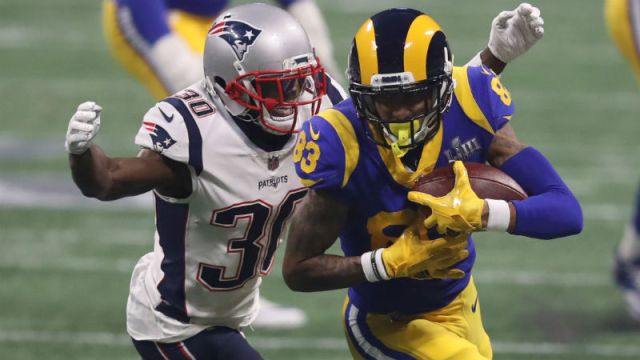