BOSTON — The Boston Celtics had clinched the fourth seed in the NBA Playoffs before they even tipped off against the Orlando Magic on Sunday at TD Garden.

An Indiana Pacers loss to the Brooklyn Nets meant the Celtics will host Game 1 in Boston, with the Pacers locking into the fifth seed. That left little to play for Sunday except pride, and momentum, as Brad Stevens noted before the game when he said the Celtics would keep their foot on the gas regardless of Indiana’s outcome.

Sunday also served as the final chance for Celtics starters to get time in a somewhat meaningful game before embarking upon the playoffs. Orlando, after all, was fighting for a playoff spot — and they clinched it with a 116-108 win over the C’s.

Now, the Celtics take their foot off the gas before revving back up for the postseason, with Stevens noting that multiple players will sit out Tuesday’s regular-season finale against the Washington Wizards.

“The point of tonight was to try to — because we probably won’t play ’til Saturday, maybe Sunday — was to get a true kind of game for some of our starters, and our top sevens or eight guys,” Stevens said after the game. “But those guys will play a lot less on Tuesday, if at all.”

It makes sense given that Boston lost two starters in Sunday’s affair, with Jayson Tatum (shin contusion) and Marcus Smart (bruised oblique) exiting with injuries, that Boston would err on the side of caution.

Al Horford and Aron Baynes also saw rest down the stretch against the Magic, with Stevens opting to sit the two big men as the C’s marched back from a 14-point fourth quarter deficit.

“And I would’ve taken Kyrie (Irving) out a little bit earlier but I felt like that was a — you know, sometimes you can build a little bit of something there when you’ve come back from down 14 and it’s ten minutes left and you come back and tie it and have a chance to take the lead on a couple of occasions.”

Here are some other notes from Sunday’s Celtics-Magic game.

— After missing each of the last three games, Jaylen Brown played a big role in the Celtics’ fourth-quarter push.

Brown, who finished with 13 points, hit a pair of three-pointers to spark the Celtic’s comeback, closing the deficit to 99-93 with 7:18 to play.

“Another reason why I thought it was important to let those guys kind of ride that out, I thought he made great plays,” Stevens said. “And when you miss a week or ten days or whatever he has missed, seeing a couple of those three go in is a good thing. … It was encouraging what Jaylen did. We need him to be a great defender for us as we enter the playoffs and everything else will take care of itself.”

The forward finished with 16 points on an 8-for-14 night from the floor. He has scored in double figures in each of his last eight games averaging 16.4 points and is shooting 58.1 percent from the field in that stretch. He is averaging 19 points thus far in the month of April.

— Orlando locked up a playoff spot on Sunday, and while it would take some crazy twists and turns, a Magic-Celtics playoff matchup would possibly give Boston problems. 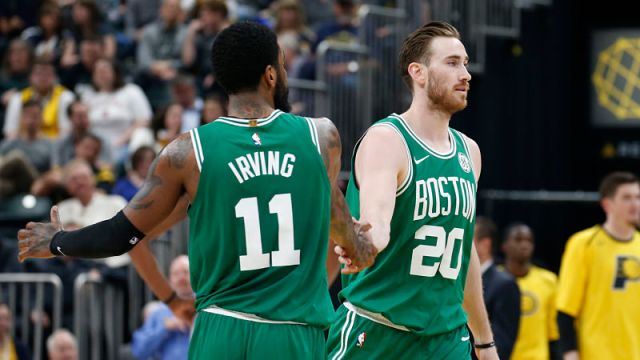