The New England Patriots reported back to Gillette Stadium this week for offseason workouts, which means the 2019 NFL Draft is right around the corner. It’s just eight days away, to be exact.

For our latest Patriots mock draft, we used Fanspeak.com’s “On the Clock Mock Draft Simulator” feature. There are pluses and minuses to using this system, but we wanted to see how the draft board might shake out if the Patriots took an offensive tackle in Round 1. Here’s what we came up with:

First round, 32nd overall: OT Kaleb McGary, Washington
There are really four main reasons why the Patriots would take an offensive tackle in Round 1:

2. The Patriots’ projected left tackle is Isaiah Wynn, a 2018 first-round pick who is coming off a torn Achilles with no NFL game experience.

3. Starting right tackle Marcus Cannon will be 31 years old this season and has two years left on his contract.

4. Starting left guard Joe Thuney will be a free agent after the season. It’s unlikely the Patriots lock him up before he hits the open market. If the Patriots can’t retain Thuney, then either McGary or Wynn could move over to guard.

McGary was a right tackle at Washington, but he’s one of the most athletic offensive tackles in the draft. He ran a 5.05-second 40-yard dash with a 33.5-inch vertical leap, 9-foot, 3-inch broad jump, 7.66-second three-cone drill and 4.58-second short shuttle. With that speed and agility, it’s possible Patriots offensive line coach Dante Scarnecchia could make him into a left tackle.

Second round, 64th overall: TE Jace Sternberger, Texas A&M
We have the Patriots ending up with the fourth-best tight end in the class behind Iowa’s T.J. Hockenson and Noah Fant and Alabama’s Irv Smith Jr. Sternberger didn’t put up elite testing numbers, but he’s still a fit based on his measurables at 6-foot-4, 251 pounds.

Third round, 73rd overall: WR Mecole Hardman, Georgia
Hardman tested almost identically to Brandin Cooks and Phillip Dorsett with a 4.33-second 40-yard dash and 6.75-second 3-cone drill at 5-foot-10, 183 pounds. The Patriots had one year of success out of another former Georgia wide receiver, Malcolm Mitchell, before injuries derailed his career.

Third round, 97th overall: WR Miles Boykin, Notre Dame
Let’s go back to back at the Patriots’ position of greatest need. Boykin might be a bit of a project, but he’s a freak athlete.

Third round, 101st overall: DT Daylon Mack, Texas A&M
This draft is lacking in big Vince Wilfork-sized bodies on the defensive front. Mack is 6-foot-1, 336 pounds and ran a 5.10-second 40-yard dash. Pro Football Focus graded him well as a pass rusher, so he could provide some push on first and second down.

Fourth round, 134th overall: QB Jarrett Stidham, Auburn
With 12 picks in the 2019 NFL Draft, it would be a little crazy not to pick a quarterback this year. Stidham was better as a junior than he was in 2018 when his draft stock lowered. The Patriots could be getting a steal here.

Sixth round, 205th overall: LB Jahlani Tavai, Hawaii
He was available on the mock draft simulator, though it seems he’ll be gone by the sixth round. At 6-foot-2, 246 pounds, Tavai has ideal size for a Patriots linebacker.

Seventh round, 239th overall: S Zedrick Woods, Ole Miss
If Zedrick can’t make it as a safety, then the Patriots could use his 4.29-second 40-yard-dash speed on special teams.

Seventh round, 243rd overall: RB Alex Barnes, Kansas State
The Patriots like running backs who run the three-cone in less than 7 seconds. That’s Barnes, who showed versatility as a ball-carrier and pass-catcher in 2018.

Seventh round, 246th overall: OT Tyler Roemer, San Diego State
Roemer has some off-field issues, but the seventh round is a good place to take a risk on those kinds of players. He has rare athleticism for a late-round offensive tackle.

Seventh round, 252nd overall: DT PJ Johnson, Arizona
Johnson is another big body with some upside. He was a one-year wonder at Arizona, but he’s worth a late-round flier.

Why Stephen A. Smith Believes Tom Brady Should Be NFL’s Highest-Paid Player 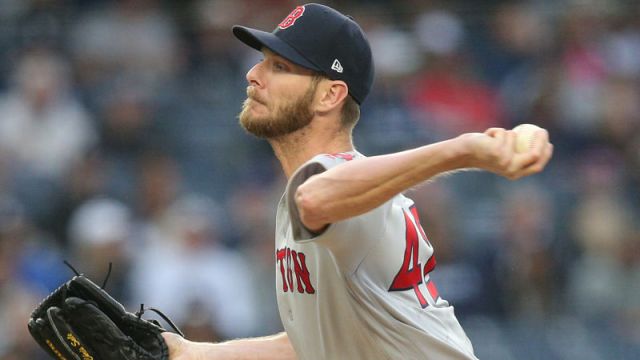