The Boston Red Sox second baseman has been sidelined since April 18 with irritation in his surgically repaired left knee. He has played in just nine games over the past two seasons. But the veteran will head out for a rehab assignment Wednesday, and is expected to see action with Double-A Portland on Thursday night according to Alex Cora as the veteran makes his way back from irritation on his surgically repaired left knee.

And there was more encouraging news on Pedroia from Fenway Park on Monday, as the vet was seen taking batting practice and running the bases.

Three members of the medical staff are watching as Pedroia does some infield work taking grounder, turning double plays, ranging left and right

Dustin Pedroia just ran the bases and is now hitting off a pitching machine on the field so he can see velocity.

There absolutely is no quit in Pedroia, who seems determined to contribute in 2019 as the Sox try to bounce back from an abysmal start to the campaign. And Pedroia’s return would be welcomed as Boston’s infield has taken a bit of a hit with Eduardo Nunez and Brock Holt also on the shelf with injuries. 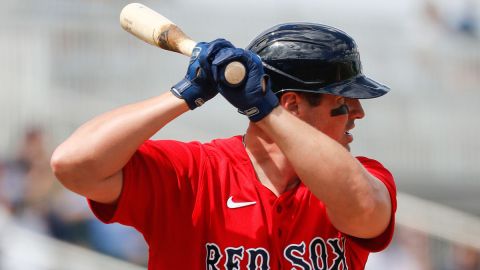