The Patriots’ schedule trickled out Wednesday, but New England’s 2019 opponents already were known, and ESPN’s Mike Clay explained earlier this week why he expects the defending Super Bowl champions to surpass their projected win total for the upcoming season.

Westgate Las Vegas SuperBook had the Patriots’ projected win total at 11 as of April 10, roughly two weeks before the 2019 NFL Draft. A lot still can change for New England’s season opener — the Patriots signed wide receiver Demaryius Thomas on Tuesday and own six picks in the first three rounds of the draft, for instance — but this seems like a reasonable bar to set for Bill Belichick, Tom Brady and Co.

Clay, who broke down each team’s projected win total for his piece published Monday on ESPN.com, ultimately arrived at 11.3 projected wins for the Patriots based on whatever formula he uses. This obviously puts New England a tick above the 11-win mark set by Vegas.

Here’s Clay’s logic for taking the over with regards to the Pats:

The Patriots have won at least 10 games each of the past 16 seasons and more than 11 in eight of the past nine. The big concern is the offense without Rob Gronkowski, as there was a moderate-to-significant drop in touchdowns, passing yards, completion percentage and yards per attempt in the 29 games for which Gronkowski was sidelined since he was drafted in 2010. In total, the players responsible for 40 percent of the team’s 2018 targets are currently not on the 2019 roster. On the plus side, the defense is allowing 2.1 touchdowns per game since 2007 and has been near or better than average all 12 seasons. The Patriots are set up with the league’s easiest schedule this season.

The Patriots went 11-5 last season, marking their lowest win total since 2009. It didn’t stop them from winning their sixth title in 18 years, though, and there’s little reason to believe New England won’t dominate the AFC East again in 2019. 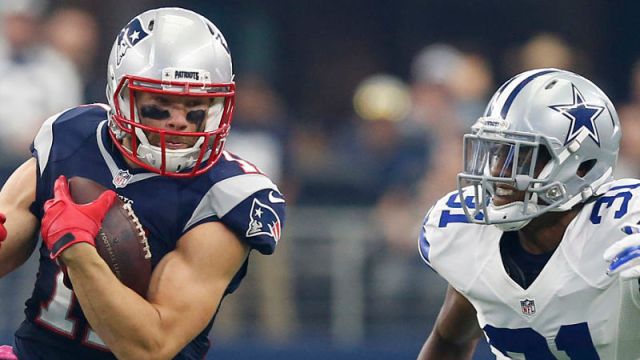