BOSTON — Resilience has been the calling card for both the St. Louis Blues and Boston Bruins this season, and Monday night it was the B’s whose resolve prevailed.

Trailing 2-0 in the second period, the Bruins scored four unanswered goals the rest of the way to earn a 4-2 victory in Game 1 of the Stanley Cup Final.

Connor Clifton, Charlie McAvoy, Sean Kuraly and Brad Marchand had the goals for the Bruins, while Brayden Schenn and Vladimir Tarasenko accounted for St. Louis’ tallies.

Tuukka Rask made 18 saves for the Bruins, while Jordan Binnington turned away 34 shots for St. Louis.

BLUES STRIKE FIRST
The Bruins predictably were a little out of sorts at times to begin the game, and the Blues took advantage, scoring the game’s first goal.

St. Louis gained possession on a puck battle in the corner, and seconds later Schenn threw a wrister on net from the top of the circle. Rask turned it away but left a rebound, and McAvoy’s attempt to clear was unsuccessful. Jaden Schwartz got the puck and put a shot on net, which also was turned away. That loose puck went into the slot, and Schenn dashed in and got possession with plenty of time, eventually firing a snipe that beat Rask at 7:23.

Both teams had eight shots on net. The Bruins had a pair of unsuccessful power-play opportunities, while the Blues were unable to cash in on their lone chance.

B’S DRAW LEVEL
St. Louis drew first blood in the second, but the Bruins pulled even by the time the horn sounded to end the middle 20 minutes.

Shortly after puck for the period, David Pastrnak skated behind his own net and dropped a no-look pass off the end boards. The pass didn’t find McAvoy though, as Schenn dashed in to take away the bad pass. After possessing for a moment Schenn fired a puck into the slot, and Tarasenko got off a one-timer that passed Rask at 1:00 to put the Blues up 2-0.

Just moments into the 2nd period, the @stlouisblues extend their lead. #StanleyCup

Just over a minute later, the Bruins got one back.

Kuraly entered the attacking zone with speed on a 3-on-2, and right when he got to the dot he zipped a pass across the zone to Clifton. The defenseman got a piece of the puck and it spun in the air, and though there was little speed on the redirect, Binnington was so far out of position it found the back of the net at 2:16, putting the Bruins back within one.

The @NHLBruins are on the board!

They cut the lead in half.

A few minutes beyond the midway point, the Bruins drew level.

Oskar Sundqvist was whistled for cross-checking Clifton, putting the Bruins on their second man advantage of the period.

McAvoy got a freshly-cleared puck in the neutral zone and gained the offensive blue line by himself. The defenseman kept carrying the puck until he reached the high slot, where he uncorked a wrister that hit off Alex Pietrangelo’s stick and beat Binnington at 12:41 to tie the game.

TIE GAME. @CMcAvoy44 with the equalizer.

After the initial score, the Blues’ offense mostly was non-existent, with the Bruins outshooting them 18-3 in the period.

KURALY WINS IT
Kuraly, who has a penchant for scoring big goals, provided the game-winning score — and it was thanks to Boston’s fourth line providing, as often is the case, some energy.

Zdeno Chara threw a puck to the net that Binnington elevated for but was unable to control at his chest. The puck dropped to the goalie’s skates, and Noel Acciari came in to try and clean up the rebound. After an unsuccessful attempt, Acciari put a pass to the far post to Kuraly, who stopped it with his skate and slipped a shot past Binnington at 5:21.

.@kurals9 gives the @NHLBruins their first lead of Game 1.

The Blues pulled Binnington with 2:13 left, and Marchand hit the dagger with 1:49 to go.

UP NEXT
The Bruins and Blues will meet Wednesday for Game 2. Puck drop from TD Garden is set for 8 p.m. ET. 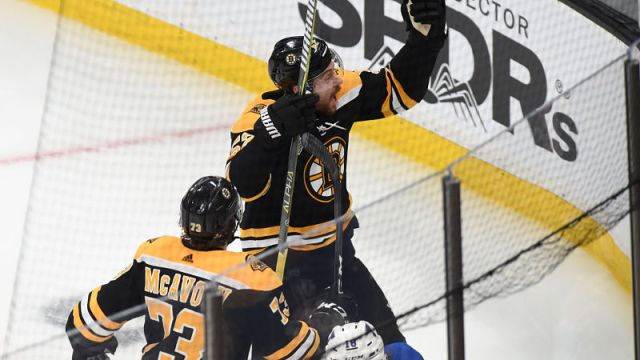 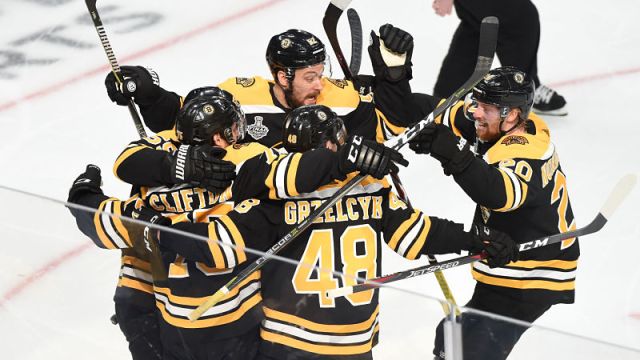