BOSTON — The Bruins are heading to North Carolina with a 2-0 series lead.

Boston potted a pair of goals in the first, second and third periods to put the Hurricanes away 6-2 in Game 2 of the Eastern Conference Final on Sunday at TD Garden.

The Bruins defense played a big role in the win, and not just by helping keep pucks out of the zone. Both Matt Grzelcyk (twice) and Connor Clifton accounted for three of Boston’s five goals. Jake DeBrusk, David Backes and Danton Heinen had the others. Justin Williams and Teuvo Teravainen accounted for the Hurricanes’ goals.

Tuukka Rask was brilliant in net, turning away 21 of the 23 shots he faced. The same can’t be said about Petr Mrazek, who stopped 19 of 25 shots.

The Bruins take a 2-0 series lead with the win.

BOSTON STRIKES TWICE
Despite Mrazek denying a couple of early chances for the Bruins, Boston was able to take a 2-0 lead through the first 20.

Carolina went on the power play at the 8:04 mark when Zdeno Chara was whistled for tripping, but Boston successfully killed it off. But with 4:38 left in the opening 20, the Bruins finally found twine when Marcus Johansson fed the puck to Grzelcyk who somehow snuck it by Mrazek for the 1-0 lead.

Juuuuuuust over the goal line and the B's are on the board first!

The B’s went on the man advantage with 1:34 left in the first and needed just six seconds to double up their lead thanks to DeBrusk.

Patrice Bergeron won the faceoff and got the puck over to David Pastrnak who ripped a shot from the point and DeBrusk was there to put the puck in the net for the 2-0 edge.

Jake DeBrusk puts the @NHLBruins up 2-0 six seconds into the power play.

FIRST FOR CLIFTON, SECOND FOR GRZELCYK
The Bruins would double their lead in the second.

Boston went to another penalty kill just 1:09 into the second when Patrice Bergeron was called for tripping. But just as they did in the first, the Bruins killed it off to keep the Hurricanes off the scoresheet.

The B’s went up by three at the 16:14 mark thanks to some tremendous patience from the Bruins. Marcus Johansson passed over to Clifton alone in front of the net, who put the puck in a wide-open the net for his first NHL goal.

Career goal No. 1 is special… but it's even better when it's in the #StanleyCup Playoffs. #NHLFirsts

Carolina went on its third power play with 6:24 left in the middle period when Chris Wagner was sent to the penalty box on a holding call. But that was killed off and the B’s went on a power play of their own when Williams was sent away for holding, and took advantage of it.

Charlie Coyle dropped the puck back to Grzelcyk, who came racing through the zone to backhand the puck past Mrazek to make it 4-0.

Through two periods, the @NHLBruins lead 4-0 after Matt Grzelcyk scores his second goal of the game.

The Hurricanes were outshot 21-17 at the end of two periods, and didn’t record their 10th shot of the game until 13 minutes into the second.

B’S SEAL IT
Boston’s lead was upped yet again just 1:10 into the third period thanks to Backes. There was traffic in front of Mrazek as David Krejci gobbled up the rebound and passed it across the crease to Backes, who hammered it home to make it 5-0.

But the Bruins weren’t done.

Bergeron hopped out of the penalty box and fed the puck to Heinen who netted the sixth goal of the game by Mrazek on an odd-man rush.

Carolina finally got on the board in the third when Williams ended Rask’s bid at a shutout.

Teravainen scored with Rask out of position to make it 6-2, but that’s as close as the Hurricanes would come.

UP NEXT
The B’s and Hurricanes meet for Game 3 on Tuesday. Puck drop from PNC Arena is set for 8 p.m. ET. 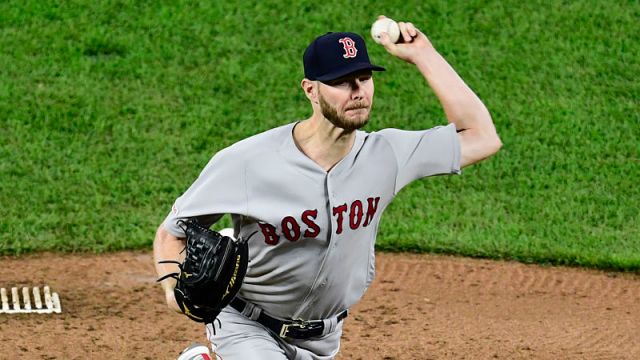 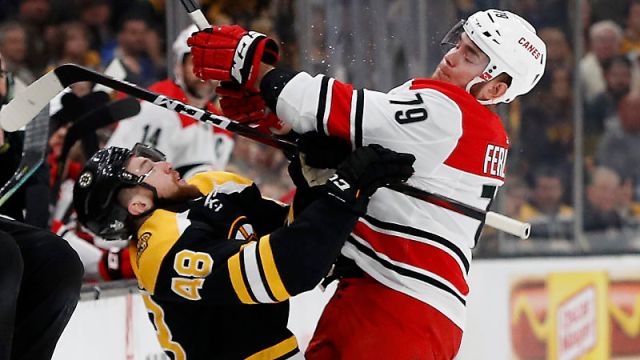