The officiating in the first three rounds of the Stanley Cup playoffs was questionable, at best, and that trend has continued with the Boston Bruins and St. Louis Blues battling for hockey’s ultimate prize.

Both the Bruins and Blues have had issues with the officiating in the Stanley Cup Final, which St. Louis now leads 3-2 after defeating Boston 2-1 in Game 5 on Thursday night at TD Garden. But the backlash isn’t limited to the teams on the ice, and former NHL enforcer Chris “Knuckles” Nilan is among those who’ve seen enough.

Nilan, who played parts of two seasons with the Bruins (1990-92) despite being known mostly for his time with the Montreal Canadiens, absolutely destroyed the officials in a profanity-laced tirade on Twitter shortly after Game 5, which was marred by multiple questionable non-calls that went against Boston.

Warning: language below is NSFW.

NHL once again at their biggest moment fuck it up. Make more excuses for the officials. Listen I had 3043 pims and I deserved every god damn one of them. I feel bad for these players who battle their hearts out and have to put up with the bullshit job some of these refs are doing

Blues coach Craig Berube called out the officiating after Game 3, which the Bruins won 7-2 in St. Louis to seize a 2-1 series lead. It was Bruce Cassidy’s turn after Game 5, as the Bruins coach fired away at the officials for not calling a penalty on Tyler Bozak, whose blatant slew foot on Noel Acciari in the third period preceded the Blues’ game-winning goal.

Complaining about the refs is a practice that’s as old as time, and it typically comes off as whiny. But it’s impossible to overlook the number of officiating missteps this postseason, and Nilan — one of the most penalized players in NHL history — couldn’t help but join the masses in speaking out. 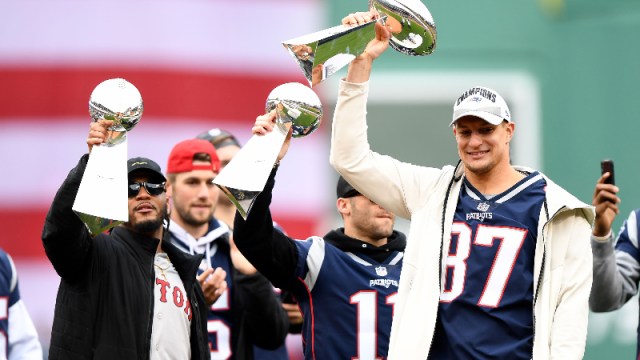