The Boston Red Sox might be struggling in their bullpen, but Rick Porcello gave them a very solid outing in their 4-3 win over the Texas Rangers.

The right-hander tossed 6 2/3 innings Wednesday, giving up just two runs on five hits with six strikeouts and no walks. He now has a 3.63 ERA in his past 11 starts, dating back to April 20, per Christopher Smith of MassLive.

Despite rough outings in his previous two starts leading up to Wednesday, manager Alex Cora said Porcello has been throwing the ball well as of late.

“I think he’s been throwing the ball well,” Cora said, as seen on NESN’s postgame coverage. “With just one pitch here to (Kevin) Kiermaier. In New York, I forget which pitch it was. It’s not like he’s making too many mistakes. … Tonight he made some good pitches. Using his fastball in and out, he had great tempo. Did a good job with Christian.”

Porcello gave up two first-inning runs Wednesday but settled down to retire 18 of the last 20 batters he faced. The righty said the first has often given him trouble but feels that’s common among starters.

If Porcello can continue to take control after the first, I think Boston will be just fine with his first innings.

Here are some other notes from Wednesday’s Rangers-Red Sox game:

— Andrew Benintendi was 3-for-4 with two doubles and a triple in the win. The outfielder was ejected Tuesday and was asked following the game if there was any correlation in his performance. His response was perfect.

— Christian Vazquez’s clutch double led off the ninth inning, which would eventually lead to him scoring the game-winning run after Mookie Betts drew a bases-loaded walk.

He then had the pleasure of dousing Betts with the water cooler in the postgame celebration:

Christian with the most critical moments of the 9th:

— Boston was at risk of losing another series to a contending opponent, but Wednesday’s win gives them the chance to split the four-game set with Texas.

Cora said after the game that the win was “very, very important.”

— The Sox and Rangers wrap up the series Thursday at Fenway Park. First pitch is set for 7:10 p.m. ET. 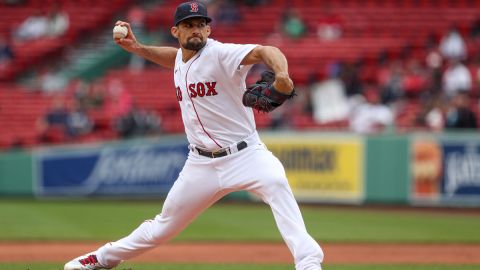 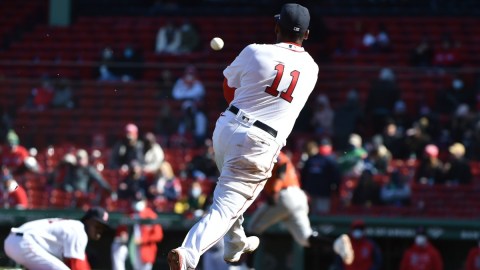