The Boston Red Sox returned home for a three-game weekend set with the Toronto Blue Jays and used an impressive comeback, capped by a Christian Vazquez walk-off home run in the 10th, to steal the 7-5 win.

Boston trailed 5-1 entering the bottom of the seventh, but used a three-run inning to get back into this one, eventually tying it in the eighth.

Chris Sale got the start for the Sox and struggled, allowing seven hits and four runs (three earned) over five innings.

J.D. Martinez led the Sox at the dish with three hits in five trips, while Vazquez’s two-run bomb was the highlight of the night.

GAME IN A WORD
Seesaw.

Toronto owned this one early, before the Sox answered the call late.

ON THE BUMP
— Sale was not himself from the get-go Friday, as the Blue Jays jumped on the lefty early.

Eric Sogard led off the game with a single to left after an 11-pitch at-bat, but Sale would bounce back to retire the next two batters. Back-to-back walks would load the bases with two outs, and Freddy Galvis made Boston pay with a two-run single.

Toronto got back on the board in the third after Teoscar Hernandez reached on an Eduardo Nunez error to lead off the inning. Randal Grichuk mashed a two-run homer in the next at-bat, making it 4-0 Blue Jays.

Sale was able to escape a jam in the fifth, but would exit with 101 pitches on the night. He battled through all five innings, giving up a season-high seven hits.

— Colten Brewer entered in relief of Sale in the sixth, retiring the side in order.

The right-hander ran into some trouble in the seventh after surrendering a one-out walk to Hernandez. Grichuk followed up a wild pitch with a line-drive base hit to drive in Toronto’s fifth run of the night, chasing Brewer from the game.

— Josh Taylor came in with one out and a man on, but would induce a double play to end the inning.

Taylor struck out back-to-back to begin the eighth before exiting the ballgame.

— Ryan Brasier gave up two consecutive singles upon taking the hill, but would get Vladimir Guerrero Jr. to fly out to end the inning.

— Matt Barnes came in for the ninth and retired the side in order.

— Brandon Workman was first out of the ‘pen in extras. The righty walked two (one intentional) but came out of the inning unscathed.

IN THE BATTER’S BOX
— Andrew Benintendi got the Red Sox started in the third with a lead off single. Martinez used a one-out single to move the outfielder to third, who scored on a Brock Holt sacrifice fly in the next at-bat.

— Boston began to scratch and crawl back into this one in the seventh after Mookie Betts led off with a triple to deep center field. Benintendi drove in Boston’s second run in the next at-bat. Xander Bogaerts added to the hit parade with a double to center, scoring Benintendi to make it 5-3. After a wild pitch moved Bogaerts to third, a Martinez RBI-single made it 5-4.

— Jackie Bradley Jr. roped Boston’s second triple of the game down the right field line in the eighth, putting the tying run just 90-feet away from home. Rafael Devers came up to pinch-hit for Nunez in the next at-bat and ripped an RBI-single to tie the game.

ARE YOU NOT ENTERTAINED?! pic.twitter.com/QnqG1BkJN8

Entering Friday, Boston’s pinch-hitters were hitting .447 on the season, so Devers’ knock was the latest on a long list.

— Vazquez was the hero late.

TWEET OF THE GAME
Bogaerts should continue using this as motivation.

Bogaerts takes his All-Star frustration out on the baseball. RBI double has this thing looking like a ballgame. 5-3, Jays.

UP NEXT
The Red Sox continue their three-game set with Toronto on Saturday at Fenway Park. First pitch is set for 4:05 p.m. ET. 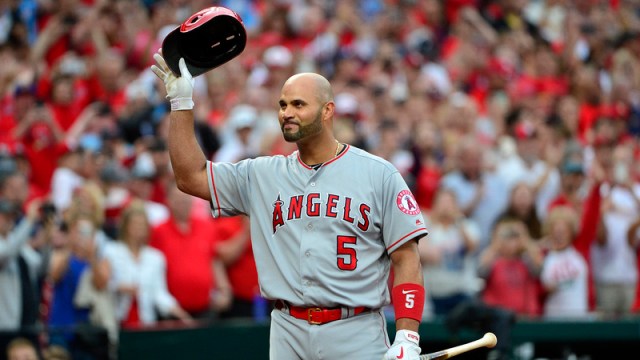 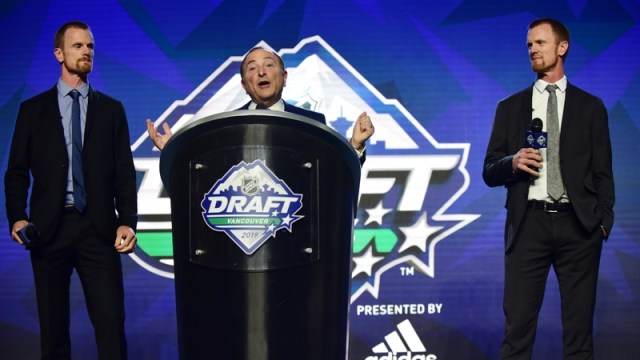 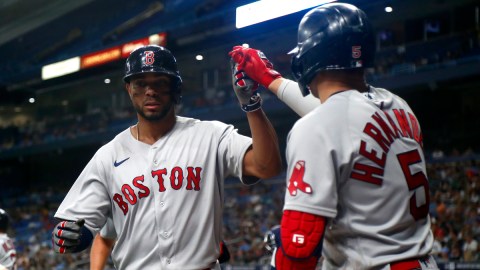