It by no means was easy, but the Boston Red Sox are tied for second place in the American League East.

Chris Sale started out strong, striking out four of the first six batters he faced and earned his fifth win of the season. But it certainly wasn’t easy after the Tampa Bay Rays tied the game at 2-2 in the third and remained that way until the seventh.

Some late-inning heroics off the bench from Christian Vazquez helped push Boston past the Tampa Bay Rays 5-3 on Tuesday night at Tropicana Field with Sale reaching double-digit strikeouts for the 12th time this season with 10.

J.D. Martinez (3-for-4) led the Red Sox in hits, while Andrew Benintendi (2-for-4) knocked in two runs for Boston.

GAME IN A WORD
Big.

Boston could have slipped back to two games behind the Rays for second place, but a win put the team in position to take sole possession Wednesday.

ON THE BUMP
— Sale looked like his vintage self early in the game, particularly in the second when ended the inning with a nasty slider to make Michael Brosseau look silly and strike out swinging.

The southpaw gave up a two-out, two-run home run to Travis d’Arnaud in the third to tie the game at 2-2. Sale ran into trouble again in the fourth with runners on the corners and two outs, but got Willy Adames to strike out to end the threat.

Sale pitched a scoreless sixth and picked up his 10th strikeout in the process, ending his night after 116 pitches (75 strikes).

— Matt Barnes tossed a 1-2-3 seventh with a strikeout.

— The eighth belonged to Brandon Workman, who pitched a 1-2-3 frame and picked up a strikeout.

He came back for the ninth and gave up a two-out RBI-single to Ji-Man Choi to make it 5-4. Workman walked d’Arnaud to load the bags and end his night.

— Marcus Walden walked the first batter he faced to bring the Rays within one, but got Austin Meadows to ground out to close out the game.

— A two-run first helped the Red Sox jump out to an early lead.

Rafael Devers and Martinez ripped back-to-back singles, with Devers hustling to third on his teammate’s hit. The third baseman scored the first run on a Yonny Chirinos wild pitch.

A Benintendi single drove Martinez home to make it 2-0.

— The game remained tied at 2-2 until Vazquez was used as a pinch-hitter for Mitch Moreland in the seventh and blasted the go-ahead home run to left field to make it 3-2.

— Boston added some insurance in the eighth after it loaded the bases on two singles and a walk. Benintendi hit into what should have been the inning-ending double play, but Brosseau couldn’t make the clean play and allowed a run to score for the 4-2 advantage.

The Rays elected to walk Vazquez to load the bases to get to Jackie Bradley Jr. who was hitless on the night. But it backfired as Adam Kolarek drilled the outfielder to force in Boston’s fifth and final run.

— Martinez and Devers each amassed three hits, while Benintendi had two.

— Moreland went 0-for-2 in his return to the Red Sox lineup.

It's incredible/remarkable/unbelievable/border-line-insane how much harder Christian Vazquez has hit the baseball this year than at any other point in his career.

UP NEXT
The Red Sox wrap up their three-game set with the Rays on Wednesday afternoon. David Price is expected to get the ball with first pitch from Tropicana Field set for 12:10 p.m. ET. 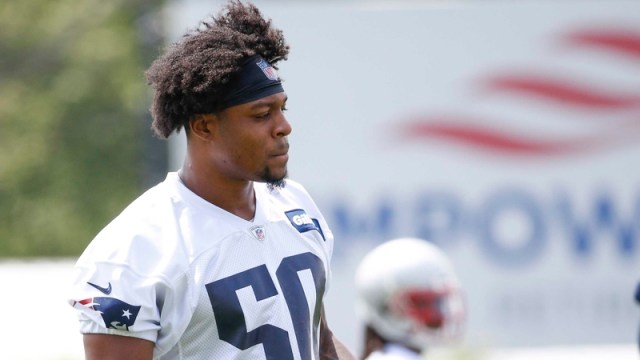