FOXBORO, Mass. — Exactly one week after New England Patriots quarterback Tom Brady reported for training camp, he addressed the media for the first time this summer.

Here are our top takeaways from Brady’s media session Wednesday:

— Brady had some fun with questions about his contract, which expires after this season.

“There wasn’t many opportunities, but he was around, and I needed someone to catch,” Brady said. “I’ve always enjoyed playing with him and obviously hope everything works out for him. I’m hoping the best, certainly.”

— Brady made it a goal to bulk up this offseason, but now it seems he’s trying to find a balance between strength and pliability.

“I focused on a lot of things,” Brady said. “I really did. I think there was a lot of — every year has its different challenges. I wanted to get a little bigger this year and put on a few more pounds and try to absorb the hits a little bit more. I worked pretty hard at that. It was good. I still realize when I got here I wanted to be a little more fluid and get back to the fluidity that I’m used to, too. There’s a difference between getting really dense and obviously being more pliable, and that’s really been my focus.”

— Tight end Rob Gronkowski retired over the offseason. The Patriots will have to readjust at the position with Matt LaCosse, Ben Watson, Stephen Anderson, Ryan Izzo and Lance Kendricks, none of whom caught passes from Brady last season.

“He’s a great player, and to replace great players, that’s not like you just pick another one off the tight end tree,” Brady said. “You can’t just go out back. You have to find guys that come in and want to put the work in, want to contribute. Between the guys we have out here now which is Ben, Matt, Stephen, Ryan Izzo, Lance, who we just got, those guys are trying to do everything they can do. They’re all new players, so we’ve got to figure out how to get them up to speed with what our expectations are, the level of competition on a daily basis.”

— On top of the turnover at tight end, the only wide receivers back from last season are Julian Edelman and Phillip Dorsett. Brady is trying to jell with Maurice Harris, Braxton Berrios, Jakobi Meyers, Ryan Davis, Gunner Olszewski, Dontrelle Inman, Danny Elting and Damoun Patterson.

“There’s a lot of turnover every year,” Brady said. “We deal with the turnover, and there’s a lot of new guys trying to assimilate into what we’ve done here for a long time. It’s really up to them to get up to speed, and everyone here has got to help them get there between the coaches, the veteran players, the leaders. It’s our responsibility to get everyone on the same page and doing the right thing and trying to help us in whatever way we can to help us move the ball down the field and score some points.”

— And don’t worry. Brady, who turns 42 years old on Saturday, is still having fun.

“Definitely. Absolutely. I have a great time,” Brady said. “Football is — I love the sport. I’ve loved playing it since I was a kid. It would be hard to imagine me doing anything else in life. I love playing ball. To still be out here at 41, soon to be 42, it’s a pretty great thing for me.” 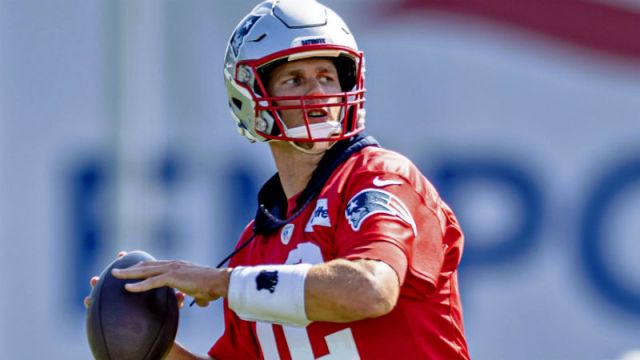