FOXBORO, Mass. — With one of their most competitive 90-man rosters in years and some tough cuts coming in nine days, the New England Patriots could free up a spot by keeping just two quarterbacks this season.

That would mean trading or cutting backup Brian Hoyer and keeping Jarrett Stidham — a roster lock, regardless — as Tom Brady’s backup.

If there were odds on Hoyer getting cut, they would have lowered after Thursday night’s 10-3 win over the Carolina Panthers. Stidham backed up Brady while Hoyer sat for the entire game.

“Yeah, we do what we think is best for the team, take a look at everybody,” Belichick said. “Brian’s played a lot of football.”

Well, they didn’t take a look at everybody. Brady went 8-of-12 for 75 yards while Stidham completed 15-of-19 passes for 134 yards. Stidham has been impressive all summer, and Thursday night’s performance was no different.

Belichick is correct, however. Hoyer has played a lot of football. He’s been in the NFL for 10 years and started 37 games. He’s been the Patriots’ backup for parts of five seasons. The Patriots know what they have in him, and he’s one of the more trustworthy backups in the NFL.

If Brady goes down during a game, Hoyer could step in without the Patriots adjusting their offense. There’s a lot of value in that. And if Brady gets hurt for a prolonged amount of time, the Patriots might be cooked anyway. Hoyer likely would be the Patriots’ better scout-team quarterback given his experience in the role and the league, but Stidham likely would develop better as the No. 2.

It’s a tough decision, and luckily we’re not the ones who have to make it. We’d probably roll with Stidham as Brady’s backup especially if the Patriots can get something back for Hoyer. Stidham has shown enough in three preseason games to prove his potential, and the Patriots could probably use an additional wide receiver, offensive lineman, linebacker or pass rusher over a third quarterback. But there are pros to keeping Hoyer too.

Nonetheless, it was a notable decision for Belichick to use Stidham and sit Hoyer. We’ll find out what it meant Aug. 31 when the Patriots must trim their roster to 53 players. 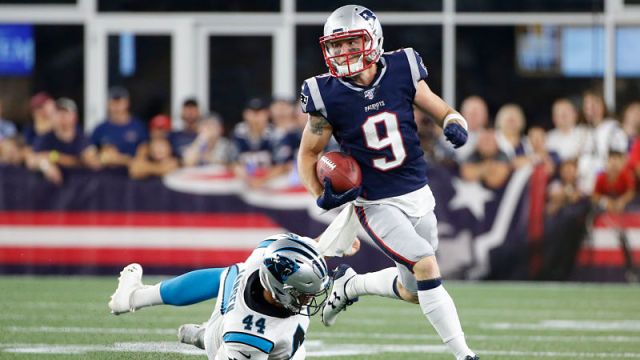