The Sun are making moves.

Connecticut announced Tuesday it has acquired center Theresa Plaisance from the Wings. In exchange, the Sun are sending Kristine Anigwe to the Dallas.

“We are excited about the acquisition of Theresa Plaisance,” Sun head coach and general manager Curt Miller said, per a press release. “Theresa is a talented, versatile offensive player and is considered one of the best stretch post players in the league. She is someone who we have targeted for a few seasons and we are excited to have her with us. Theresa gives us an experienced, young veteran presence who has a tremendous reputation across the league as a fantastic teammate and unifier in the locker room.”

Anigwe, 22, was selected ninth overall by the Sun in the 2019 WNBA Draft. She averaged 2.0 points and 1.8 rebounds off the bench during her 17-game career in Connecticut.

Plaisance, 27, has spent six seasons in the WNBA. She started 12 of the Wings’ 22 games this season, averaging 6.0 points and 4.4 rebounds per game.

Relentless defender. @tplai55 is gonna be ? in the orange and navy! pic.twitter.com/UyTxidNkE7

Seems like Plaisance will be a great fit for the Sun. But Anigwe surely will be missed. 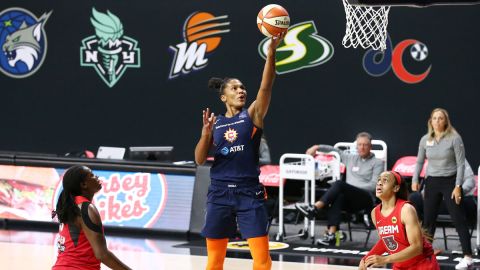