After taking a year off from training camp trades last summer, the New England Patriots are squarely back in the saddle.

Cunningham will back up Wynn and Cannon at offensive tackle, while Eluemunor has played both guard and tackle in his NFL career.

If the Patriots elect to keep nine linemen, the top options would be veteran James Ferentz and undrafted rookie Tyler Gauthier because they could back up Karras at center with David Andrews at risk of missing the season with a blood clot in his lungs. If the Patriots don’t keep Ferentz or Gauthier, then Thuney likely would be the emergency center. If Karras got hurt and Thuney stepped in, then Froholdt or Eluemunor likely would take over at left guard.

We’re all excited about how Stidham has played. But, then I remember he was a 4th round pick and the seventh QB taken. If that draft were redone now, and knowing what we’ve seen in the pre-season, is Stidham still a fourth rounder and the 7th best quarterback?
— @MarkJohnBennett
At the very least, I think he would be drafted earlier than the 133rd overall pick. He was taken only six picks before the start of the fifth round. He’s honestly played like a first- or second-rounder this summer.

Kyler Murray, Daniel Jones, Dwayne Haskins, Drew Lock, Will Grier and Ryan Finley all were taken before Stidham. I can’t see Stidham going before Murray, Jones, Haskins (all first-round picks) or Lock (a second-round pick). It’s more reasonable to think he’d be drafted before Grier or Finley, both of whom were considered to have physical limitations with their arm strength but solid smarts and accuracy.

We don’t want to overreact to preseason play, but Stidham has been considerably better than Grier. Maybe Stidham goes in the third round and before Grier but after Finley and the rest.

The toughest picks were the first, third, fourth and fifth rounds.

The first round ultimately came down to Seymour, Vince Wilfork, Logan Mankins, Devin McCourty and Dont’a Hightower. Seymour should be in the Pro Football Hall of Fame, so he gets the nod.

Third round was between Thuney, Logan Ryan and Duron Harmon. Thuney has started more games in three seasons than Harmon has in six and Ryan did in four. We have a feeling he’ll be considered one of the best guards in football after this season. Bill Belichick already called him one of the Patriots’ best players last season.

I considered Stephen Gostkowski and James White for the fourth round. Samuel had an overall fantastic NFL career, however.

Dan Koppen, Marcus Cannon and Slater were the finalists for fifth-round. I think Slater, like Seymour, could eventually find himself in the Pro Football Hall of Fame, and there’s something to be said for 11 years of consistency and longevity.

Doug what do you think is the weakest unit on the team this year? #maildoug
— @14martinc
Tight end, and it’s not even close.

What do you think of the tight end situation ?? #maildoug
— @_24obama
So, let’s get right into this question. At this point, I’d expect Ryan Izzo to start in Week 1. Matt LaCosse would have been my guess earlier in camp but he’s missed about half of the summer with an injury. Perhaps LaCosse comes back Thursday night in the Patriots’ fourth and final preseason game and makes a final push for the starting role, but Izzo is the better blocker, and how not sure if there’s a massive difference in their receiving skills.

Shooting my last shot, who do you predict will be the most productive TE this season? #ComeOnKyed
— @KMDiGio
Ultimately, I think Watson will be the Patriots’ most productive tight end by seasons’ end unless they make a trade at the position. I wouldn’t expect Watson to have much more than 400 or so yards.

@DougKyed joe judge is sounding high on not only Gordon but also Thomas. Think Thomas can earn the trust of Brady as quickly as Gordon did last year? Thoughts on Harry haven?t heard much about him lately? #maildoug
— @JDEZ1687
I do think Demaryius Thomas can earn Tom Brady’s trust quickly. At this point in his career, Thomas isn’t as physically gifted as Gordon, but he’s been around the block, has played in similar offensive systems and seems to be developing an important rapport with Brady off of the field.

With Thomas, it comes down to how much he has left in the tank after returning from a torn Achilles.

I’m not sure what to think about Harry. He hasn’t practiced since Week 1 of the preseason. I wouldn’t expect much from him to start the season, but I think he could produce down the road. He could always shock me and start in Week 1 after missing so much time, but I find it doubtful.

Will the o-line be just as reliable with karras instead of Andrews? I personally think we?re in some trouble if anyone else gets injured
— @haroldtrent_
It definitely won’t be as reliable as it would have been with Andrews, a three-year starter, at center. But Karras’ experience in the Patriots’ offense is invaluable.

This question was sent before the Patriots acquired Cunningham and Eluemunor. I think their depth is fine now as long as those players pan out.

What?s your view on Josh Gordon and what does he bring to the team this year?
— @GameWinningPlay
My view is he’s a talented player who the Patriots can’t count on. That’s why it’s essential to keep more wide receivers than usual. I think guys like Demaryius Thomas, N’Keal Harry, Jakobi Meyers and Phillip Dorsett can essentially serve as insurance in case Gordon gets suspended again. The Patriots also still have Cameron Meredith on the physically unable to perform list.

Gordon brings top X wide receiver potential to the Patriots’ offense. He’s coming in with good chemistry with Brady, so as long as he’s in good shape and mentally stable, I think he could be even better this season than he was last year. when he had 720 yards in 11 games.

CFA or Popeyes?
— @BPhillips_SB
Popeyes, though I haven’t tried their new sandwich yet. There aren’t enough Popeyes in Southeastern Massachusetts. I think the closest one to me is in Rhode Island actually.

What’s the story with Troy Brown?
— @PatsFanGarb
He’s basically serving as the Patriots’ assistant wide receivers coach. At this point, it would be odd if he didn’t maintain that role into the regular season.

Who will return kicks and punts this season?
— @ChefdDds89
My guess is either Brandon Bolden or Jonathan Jones fields kicks and Julian Edelman handles punt returns.

Assuming Edelman and Gordon are WR1/2 to start the season, who do you think will be WR3? DT, Harry, Dorsett (?), Meyers? A sort of committee? And which one of those guys do you think will end the season with the most prominent role in the offense? #MailDoug
— @alonsocervp
My guess would be Dorsett or Meyers in Week 1 and Harry by the end of the season. I have no idea what to expect out of Thomas.

Did you know that Tom Brady had been wearing the same shoulder pads for 25 years?
— @TheDTSB
I didn’t until this week.

Gunner gonna make the cut?
— @Dantxx
Doubtful. I think the Patriots will want to keep him, though. So, if they’re afraid another team will claim him off of waivers, then maybe they’ll keep him around. It would be a fantastic story.

How was Olivia?s birthday?
How?s your cat?
Is Jakobi Meyers the best WR you have ever seen on the Pats or does Moss still have a bit of an edge?
— @timm_weinert
Birthday was great. We went to the zoo, and Olivia loved the lions.

Rambe is also great. And fortunately, he’s great with Olivia.

@DougKyed Does the Pats defense let up less points than last year? And get more Sacks/pressures? #maildoug
— @JDEZ1687
Yes and yes.

What was the deal/story with that 5th dentist and why didn?t he recommend Trident gum? #MAILDOUG
— @MikeFaubert1
Maybe he was a Big League Chew type of guy.

Some piece of entertainment news popped up on my feed the other day. I clicked on the tweet, and the first reply I saw was from an anonymous account calling the subject of the tweet ugly. People didn’t have this kind of access or the ability to be anonymous this easily in the past. And older generations love calling millennials and Generation Y-ers soft and snowflakes and everything, but they never had to deal with this neverending browbeating. It feels like it might have lasting effects on younger generations who never knew anything different. Maybe we’re already seeing it with the lack of compassion and sympathy on social media.

I personally don’t understand the appeal of berating people from an anonymous persona. Clearly, it says much more about that person than it does whoever they’re replying to. But that type of person, whatever is wrong with them, didn’t have the ability to reach others like this so easily in the past.

I just wish everyone, including myself, would be nicer to others.

On a separate note about Twitter, on Tuesday, Rob Gronkowski got emotional when he talked about the rigors of playing football. He also left the door wide open for a return to the sport. I sent off a couple of tweets about his potential return to football. A couple of people aggressively disagreed with my opinions, so I quote tweeted responses to them.

Then I received this reply:

I agree with you on this point Doug but your super sensitive, literally defend yourself on every little point even when others make valid ones

Maybe that’s true. Maybe I am “super sensitive.” But what is Twitter’s purpose if I’m not supposed to converse with followers who reply to my tweets? Do they prefer to just scream into an ether? Is it sensitive to defend an opinion that’s been challenged?

Twitter is necessary for my job, and I don’t think I possess the willpower to just stop checking my mentions. I also find feedback valuable if it’s given in a constructive manner. And I have it very, very, very easy compared to other people. It just bums me out to click on a tweet and immediately see harassment. I don’t understand it.

OK, off my soapbox. Back to football.

Chances of @Patriots going 19-0 this year? I think 60% chance. If it happens, Brady retires in my opinion.
— @tjs3141
Sixty percent seems high. Maybe like 5 percent?

Do you think that one defensive lineman unexpectedly beat out Mike Pennel for a spot on the team? Danny Shelton perhaps? Or did Mike Pennel, on his own, sink to the bottom of the depth chart and get cut?
— @JimG_Patriots
I think it’s more the latter than the former. I think separately, players like Shelton and Byron Cowart impressed. But Shelton, Cowart and Pennel all could have coexisted on the roster.

with Devin and Patrick both at age 32 is there a sense or urgency in the draft or to acquire more safety help?
— @G1ZZY_
It’s Aug. 28! Way too early to talk about the draft. I’ve been surprised that the Patriots haven’t spent more draft capital at safety recently, however. 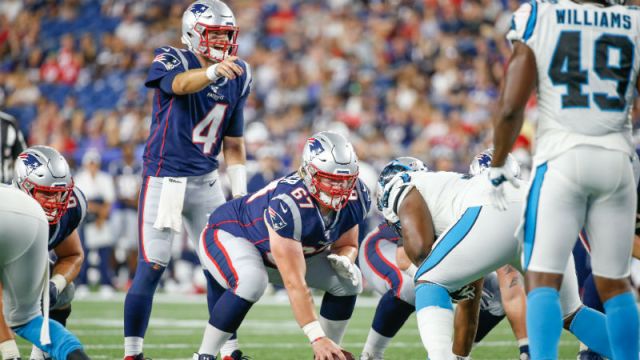 These Patriots Roster Battles Will Be Decided In Preseason Finale Vs. Giants 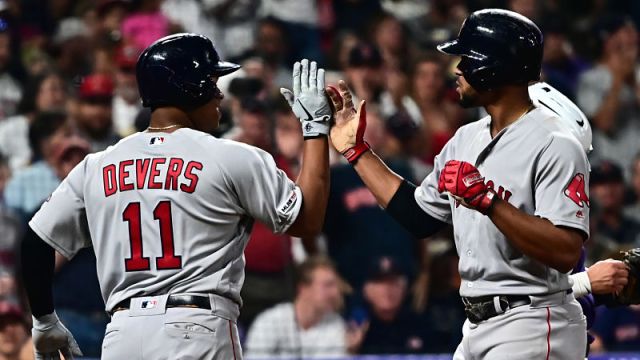