Final, Patriots 22-17: With most New England starters getting the night off Saturday, impressive performances by a bevy of Patriots rookies headlined the team?s road victory over the Tennessee Titans in Week 2 of the NFL preseason.

Second-rounder Joejuan Williams broke up two passes in the opening quarter. Third-rounder Damien Harris finished with 80 yards on 14 carries and another 23 on four catches in his Patriots debut. Fourth-rounder Jarrett Stidham completed 14 of 19 passes for 193 yards and a touchdown, including a 7-for-7 streak during a 99-yard game-winning touchdown drive.

The Patriots will host the Carolina Panthers on Thursday at Gillette Stadium in their penultimate preseason contest.

Fourth quarter, 4:12, Patriots 22-17: Jarrett Stidham has endured a few hiccups tonight, but he just led an 11-play, 99-yard touchdown drive to give the Patriots their first lead of the night.

Stidham’s most impressive throw of the series was his last one: a perfect back-shoulder ball to Damoun Patterson on third-and-12 that resulted in a 23-yard score.

Stidham was 7-for-7 for 89 yards on the drive with completions of 10 yards to Jakobi Meyers (the Patriots’ best receiver by a long shot tonight), 17 yards to Dontrelle Inman and 21 yards to tight end Ryan Izzo, who dropped a would-be touchdown last week in Detroit.

Fourth quarter, 11:22, Titans 17-15: Are you tired of hearing about Chase Winovich highlights? Sorry, here’s another:

During Tennessee’s latest possession, running back Akeem Hunt shook off an attempted tackle by cornerback Ken Webster and found open space, only to have Winovich track him down and make the tackle 15 yards downfield.

It’s almost a cliché at this point, but Winovich’s motor is seriously impressive, especially this late in the game.

Fourth quarter, 13:43, Titans 17-15: Tonight’s been a mixed bag for Jarrett Stidham, who’s made some nice throws but also has nearly thrown three interceptions. Fortunately for the Patriots, all three wound up falling incomplete.

Stidham picked up a first down with his legs on New England’s latest drive, scrambling for 11 yards on third-and-10 to earn some applause from Tom Brady.

The Patriots drive into the red zone but came up empty after Hjalte Froholdt was called for holding and Stephen Gostkowski missed a 40-yard field goal. Of note: Jake Bailey was the holder the field-goal attempt, a spot usually filled by Ryan Allen.

The not-so-good: Duke Dawson surrendered a 21-yard completion to Kalif Raymond on second-and-20, continuing what’s been a miserable preseason for the 2018 second-round pick.

Third quarter, 9:49, Titans 17-15: Jarrett Stidham looked sharp to open the second half, completing passes to Jakobi Meyers (14 yards on third-and-7), Eric Saubert (10 yards after scrambling to evade the rush) and Lance Kendricks (28-yard catch-and-run) to move the Patriots down the field.

Stidham did nearly have a pass picked off at the goal line, but a defensive holding on third down extended the drive, and running back Nick Brossette scored from 1-yard out to pull the Patriots to within two.

Damien Harris also had another excellent run, breaking multiple tackles to pick up 17 yards. Promising performance from him tonight.

Halftime, Titans 17-8: Jarrett Stidham’s second preseason appearance is off to an inauspicious start.

Stidham’s first drive ended in a safety after one play, and the Patriots gained a total of 3 yards on his second before punting. We’ll see if the Auburn product can find a rhythm in the second half.

This hasn’t been nearly as clinical a Patriots performance as last week’s blowout of the Lions was, but there have been several standouts. Chase Winovich, Isaiah Wynn, Damien Harris, Joejuan Williams, Byron Cowart and Jake Bailey all impressed in the opening half.

After tallying tackle for loss, a pressure and a QB hit during the previous Titans possession, Winovich proceeded to draw a hold and, three plays later, bury Ryan Tannehill for his third sack of the preseason. Incredible sequence for the third-round draft pick, who’s having as good of a preseason as any rookie could ask for.

Second quarter, 4:37, Titans 17-8: Chase Winovich is causing all sorts of problems for the Titans’ offense, just as he did last week in Detroit.

In one four-play span, the rookie edge rusher: 1) shed a lead block to drop Jeremy McNichols in the backfield, 2) pressured Ryan Tannehill to force an incompletion and 3) chased down and hit Tannehill to force a throwaway. This kid has boundless potential.

The Titans eventually punted — though a third-down penalty on Duke Dawson temporarily extended the drive — but a holding penalty on Lance Kendricks on the opening play of the ensuing Patriots possession resulted in a safety.

Second quarter, 7:48, Titans 15-8: This has been a tough preseason for James Ferentz.

Playing left guard rather than his natural position of center, Ferentz was beaten badly by Isaiah Mack on a sack that took Brian Hoyer a few moments to recover from. The veteran O-lineman also struggled last week with multiple penalties.

Hoyer found tight end/fullback Andrew Beck for a 9-yard gain one play later, but it wasn’t enough for a first down.

The Patriots changed things around up from on this latest drive, with Isaiah Wynn leaving the game after three promising series. Dan Skipper transitioned over to left tackle, with Cole Croston replacing him on the right side.

In his first drive of the night, former Dolphins quarterback Ryan Tannehill guided the Titans 65 yards down the field in six plays. Running back Jeremy McNichols capped the drive by catching a short pass from Tannehill and flipping over the pylon for a 15-yard touchdown.

Tannehill also hooked up with tight end Anthony Firkser for this 22-yard pickup against Terrence Brooks:

Tannehill floats a beauty to Anthony Firkser who makes a tough catch!#NEvsTEN pic.twitter.com/lEBwvsrwSV

Second quarter, 14:26, 8-8: Brandon Bolden finished the job with a 1-yard touchdown plunge, but this series was the Damien Harris show.

The rookie running back carried the ball three times for 34 yards on the drive, including a 20-yard dash that set up Bolden’s score.

We’ve seen a lot of Harris tonight, and he’s acquitted himself well in his first taste of NFL action. The jump cut he used to find a lane on his big gain was one of his favorite maneuvers at Alabama.

Wideout Jakobi Meyers kept up his strong summer by providing the two-point conversion. He also had a 16-yard pickup earlier in the drive.

First quarter, 4:31, Titans 8-0: Marcus Mariota hit Delanie Walker for a touchdown to open the scoring, but the more concerning developments happened earlier in the drive.

Edge rushers Derek Rivers and Shilique Calhoun both suffered apparent leg injuries and were taken to the sideline medical tent. Rivers and Calhoun — third-round draft picks in 2017 and 2016, respectively — both enjoyed strong training camps and have seen considerable reps with the first-team defense over the last few weeks.

We’ll share updates on their statuses when they become available.

First quarter, 8:25, 0-0: A sack that would have ended the Patriots’ second drive was wiped away by an illegal use of hands penalty on old friend Malcolm Butler.

New England eventually punted four plays later, but not before Damien Harris hauled in a nice diving catch from Brian Hoyer. Harris is getting a lot of run in this first quarter.

Here’s one number-related oddity: tight end Lance Kendricks apparently wasn’t just wearing Matt LaCosse’s practice jersey on Friday. He’s officially switched from No. 81 to 83. Wonder if that says anything about the status of LaCosse, who’s currently sidelined with an ankle sprain.

After misfiring deep to Dontrelle Inman on the first play from scrimmage, quarterback Brian Hoyer had an intermediate pass to Braxton Berrios intercepted by former Pats corner Logan Ryan.

Isaiah Wynn (at left tackle) and Damien Harris (at running back) both started the game for New England after sitting out last week. Dan Skipper, who’d been the primary left tackle for much of the summer while Wynn recovered, is playing on the right side tonight.

The Patriots are fielding backup-heavy lineups on both sides of the ball, with Wynn the only projected Week 1 starter currently in the game.

The Titans, who are playing their starters, went three-and-out on the ensuing possession.

Cowart, a fifth-round rookie out of Maryland, bowled over the veteran left guard to sack Marcus Mariota on the game’s opening series. It’s been a strong start to the preseason for Cowart, who had an uneven college career after ranking as the nation’s top high school recruit as a senior. He also tallied half a sack against the Detroit Lions last week.

Later in the drive, Mike Vrabel unsuccessfully challenged what he believed was pass interference on Patriots rookie cornerback Joejuan Williams. Lions coach Matt Patricia attempted to do the same last week but got the same result.

First quarter, 15:00, 0-0: The Titans won the opening coin toss and chose to receive. In a change from last week, Stephen Gostkowski, not rookie Jake Bailey, will handle the opening kickoff for the Patriots.

6:22 p.m.: Sounds like Tom Brady isn’t the only Patriots starter getting the night off.

Looks like Stephon Gilmore, Jon Jones, Devin McCourty, Jason McCourty, and Patrick Chung will get the night off. They're on the field in uniform, but not taking part in warmups.

After tonight, the Patriots will have just four days off before their third preseason game against the Carolina Panthers. Since starters typically play into the second half of that game, it’s not overly surprising to see the team rest them for this one.

Phillip Dorsett reportedly is in uniform but is not likely to play. He’s dealing with a thumb/hand injury suffered in practice this week.

During an interview on 98.5 The Sports Hub’s pregame show, Bill Belichick said Isaiah Wynn should be active tonight.

Bill Belichick to @scottzolak on Isaiah Wynn: "Hopefully, he'll get some playing time tonight and continue to build on that."

5:00 p.m.: It now appears we will not see Tom Brady in action tonight.

According to multiple reports, Brady is expected to sit out for the second consecutive week. That means Brian Hoyer likely will start at quarterback, with rookie Jarrett Stidham surely seeing plenty of playing time, as well.

Left tackle Isaiah Wynn, meanwhile, is expected to make his preseason debut, per Jeff Howe of The Athletic. Wynn has not played since tearing his Achilles last Aug. 16.

12:20 p.m. ET: Fresh off the news that Josh Gordon will be rejoining the team in the coming days, the New England Patriots will take the field tonight for their second of four preseason games.

Their opponent: the Tennessee Titans, who hosted the Patriots for a set of joint practices this week in Nashville.

Starters typically play at least a series or two in Week 2 of the preseason, so we should witness the 2019 debuts of stars like quarterback Tom Brady, cornerback Stephon Gilmore, running back Sony Michel and defensive end Michael Bennett.

This game also could feature the return of left tackle Isaiah Wynn, who hasn’t played since tearing his Achilles in Week 2 of last year’s preseason. On the other side of the ball, roster battles at every level of the defense will be closely monitored.

Kickoff is set for 7 p.m. ET at Nissan Stadium. Be sure to check back throughout the afternoon for full pregame coverage. 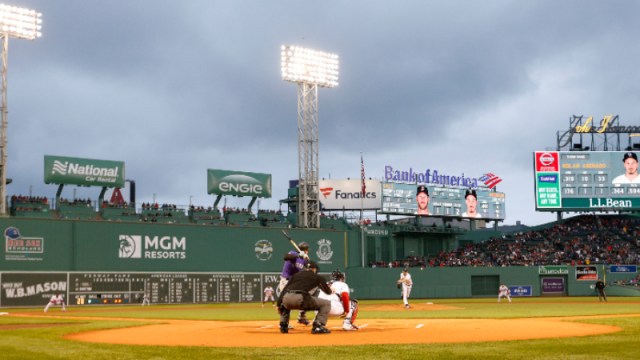 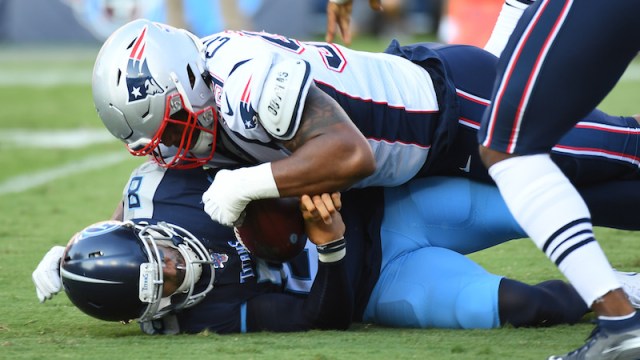