The Boston Red Sox are back in the win column, but it wasn’t easy.

Boston dropped the Cleveland Indians 7-6 on Tuesday behind a six-hit, three-RBI night for Rafael Devers.

The Sox knocked around Indians starter Mike Clevinger for 11 hits over 4 2/3 innings, but Cleveland battled back from an early 6-1 deficit, tying the game at six in the ninth off Brandon Workman.

But it was Jackie Bradley Jr. who hit the 10th-inning solo shot that put Boston ahead for good.

Boston’s early lead disappeared, forcing them to work through the late innings.

ON THE BUMP
— Sale opened his night by the retiring the first eight batters he faced, striking out four.

Tyler Naquin broke that stretch, singling to left with two outs in the third. After Francisco Lindor reached on an infield single, Sale struck out Oscar Mercado to escape the inning. That punch-out was the 2,000th of the southpaw’s career.

The fastest in MLB history. pic.twitter.com/FaBwwLvDfe

Carlos Santana, who hit a walk-off home run on Monday, led off the fourth with a solo shot to put Cleveland on the board. Sale responded to the homer with three consecutive strikeouts to end the inning.

The left-hander allowed a two-run shot to Franmil Reyes in the sixth, which made it 6-3.

Sale ran into a bit of trouble in the seventh after a Devers error gave Cleveland second and third with one out. Lindor made Boston pay by doubling down the left field line to make it 6-5, ending Sale’s night.

The southpaw allowed five runs (three earned) on five hits in 6 2/3 innings to go along with 12 strikeouts. Despite the so-so line, Sale was solid for the majority of the evening.

— Matt Barnes entered in relief and allowed a single before escaping the jam by striking out Santana.

The right-hander led off the eighth inning by issuing a walk to Reyes, leading Alex Cora to call to the bullpen.

— Josh Taylor came in to face Jose Ramirez, getting the third baseman to ground out before getting the hook.

— Nathan Eovaldi, who is (tentatively) scheduled to start Wednesday with a pitch count of around 55, was next out of the bullpen with one out and a man on second.

The righty reared up with a pair of 99 mph fastballs to strike out Roberto Perez before getting Jason Kipnis to ground out to end the inning.

— Brandon Workman entered for the ninth and gave up a leadoff single to Greg Allen, who would ultimately steal second in the next at-bat.

After striking out Naquin to record the inning’s first out, Workman gave up an RBI-double to Lindor that tied the game at six.

— Andrew Cashner allowed a single to begin the 10th but would work out of any further damage to record his first career save.

IN THE BATTER’S BOX
— Mookie Betts got the Red Sox off to a nice start at the plate, smoking a leadoff triple high off the center field wall. Devers drove him in with a stand-up double in the next at-bat, giving Boston a quick 1-0 lead.

— Marco Hernandez got on with a one-out single in the second, followed by a Sandy Leon walk. With two down, Betts would loop an RBI-base hit to left field, making it 2-0 Red Sox.

— Devers ripped his 41st double of the year (second of the night) to begin the fifth. J.D. Martinez picked up his second hit of the night with a single later in the inning to give Boston corners with one out. The Sox plated runs three and four off back-to-back singles from Mitch Moreland and Hernandez, which ended Clevinger’s night.

— Boston’s offense kept clicking in the sixth off Cleveland reliever Josh Smith. After Bradley Jr. and Betts reached base after being hit by a pitch and walked, respectively, Devers hit his third double of the night, driving in both baserunners to make it 6-1.

JBJ for the lead! pic.twitter.com/W0a1PErnjd

TWEET OF THE GAME
Yeah, Rafy had quite the night.

To recap Rafael Devers tonight. 6-for-6 at the plate, caught stealing in the third, costly error at third in the seventh and a baserunning gaffe to end the 10th.

UP NEXT
The Red Sox wrap up their three-game series with the Indians on Wednesday afternoon at Progressive Field. First pitch is set for 1:10 p.m. ET. 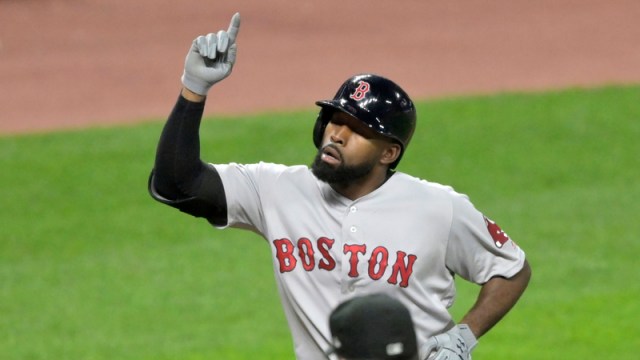