When the New England Patriots signed five players on the first day of free agency, defensive tackle Mike Pennel came with the highest expectations. Now he and two other players signed on the first day of the new NFL league year are off the Patriots’ roster.

Bruce Ellington and Maurice Harris previously were released by the Patriots. Pennel was cut Monday, NESN.com confirmed through a source. Only Terrence Brooks and Matt LaCosse remain from those initial five signings.

Pennel’s release doesn’t come as a major shock because of his preseason usage. The 6-foot-4, 330-pounder wasn’t running with the Patriots’ starting defense, and he was playing deep into preseason games.

The move leaves Danny Shelton as the Patriots’ clear-cut top nose tackle and a stone-cold lock to make the 53-man roster if he wasn’t already. But what does this mean for the rest of the Patriots’ defensive line depth?

Here’s how we currently see the players stacked up:

If you’re wondering why players like Chase Winovich, Shilique Calhoun and Derek Rivers are missing, they would fit into the category of outside linebackers.

Butler and Cowart are rotational pieces behind Bennett and Guy. One of them could start in the Patriots’ 3-4 base over Bennett to keep the veteran fresh to rush the passer.

Cowart, a 2019 fifth-round pick, has been a preseason standout through three games. He’s shown potential as a pass rusher and run stuffer.

Though they play different positions, Pennel’s release might most benefit a player like Wise. He’s not an ideal fit as a defensive end on early downs, but he could contribute as a pass rusher in nickel and dime.

Pennel’s release also could help Parry if the Patriots want to keep a second nose tackle. Parry has been a solid contributor all summer, and he and Thurman are the only other nose tackle options on the roster behind Shelton.

Parry was a key contributor in his first two NFL seasons, starting all 32 games with the Indianapolis Colts after being selected in the fifth round of the 2015 NFL Draft out of Stanford. He was arrested before the 2017 season then was beat out for a roster spot in Indianapolis. He’s bounced around the NFL since then, spending time with the New Orleans Saints and Minnesota Vikings before catching on with the Patriots this offseason.

If Parry can’t find a spot on the Patriots’ 53-man roster, then he or Thurman could still stick around on the practice squad to serve as emergency depth for Shelton.

Kamalu can play all over the defensive front from defensive tackle in sub-packages to outside linebacker in their base 3-4. 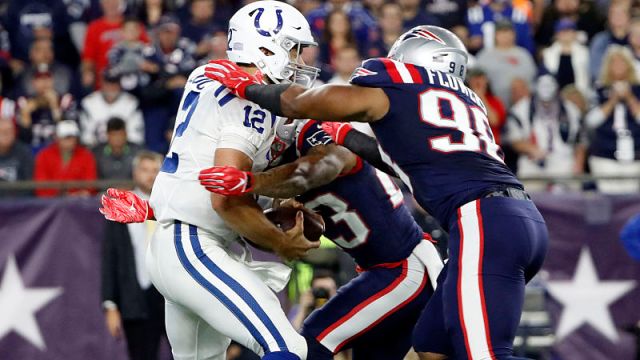