The competition for the backup spot this season, however, remains open entering Thursday’s preseason finale against the New York Giants.

The Patriots must choose one of two avenues before roster cutdown day arrives on Saturday: 1) keep Brian Hoyer aboard as Tom Brady’s primary understudy and carry fourth-round draft pick Jarrett Stidham as the third man on the depth chart, or 2) cut or trade Hoyer and trust Stidham to handle top backup duties as a rookie.

Both options have their benefits.

Hoyer is an established pro with years of experience in the Patriots’ offense who’s also considered a valuable scout-teamer. In the event of a Brady injury, New England likely would be better off with the 33-year-old running the show than Stidham, at least in the short term. And keeping Hoyer would allow Stidham to focus more on his personal development.

But doing so also would mean dedicating an additional roster spot to a player in Stidham who, barring a full-fledged disaster, wouldn’t play a snap until 2020 at the earliest. Would the Patriots be better off using that spot on a linebacker, receiver or tight end who could help the team win games this season?

That’s a question Bill Belichick and his staff — who haven’t entered a season with three QBs on their 53-man roster since 2011 — must answer within the next five days.

?Well, it?s really a total decision,” Belichick said during an interview Monday with WEEI’s “Ordway, Merloni & Fauria.” “You keep the 53 players that you think are best for your team. There?s no way that you can keep the depth at every position that you want to keep, so you have to pick where you have depth and where you want depth.”

Hoyer (18-of-22, 202 yards, two touchdowns, one interception) and Stidham (43-of-62, 506 yards, two touchdowns, no interceptions, one lost fumble) both have posted solid preseason numbers with Brady playing just three total series. Hoyer started the first two games, but Stidham — who’s performed better this summer than any Patriots rookie signal-caller in recent memory — relieved Brady in the third and played the final two-and-a-half quarters.

Asked why Hoyer did not see the field against the Carolina Panthers, Belichick essentially said the team knows what it has in the veteran. With Stidham, not so much. The coach expanded on this point during his WEEI appearance.

?I think when you look at a 90-man roster, there?s a lot of discrepancy from, let?s call it, 1 to 90 on what those individual players need,” Belichick said. “Take Stidham, for example. That would be a good example. When are you going to play him? If you don?t have any preseason games (left), then when are you going to play him? How do you evaluate players like that where you only have one — you only have one quarterback. …

“If you want to evaluate that position — which everybody thinks is an important position — if you don?t have games to do it, then when do you do it?”

Offensive coordinator Josh McDaniels wouldn’t provide any insight into how the current depth chart looks during his meeting with reporters Monday, but he did speak at length about both backups.

?I love Brian Hoyer,” McDaniels said. “Brian has been great for us. He?s great for Tom. He?s done a nice job in the preseason, obviously. Brian knows our system, knows how to operate and function within the things we do, throws the ball well and is an extremely hard worker. Really smart, great teammate and as good a leader as (any) backup quarterback that I?ve been around. Because that?s a difficult position to be in sometimes.

“But Brian understands who he is, what his role is and does a tremendous job of pushing his teammates. He goes in and takes his job very seriously, every rep he?s in there, whether it be in practice or a game, scout team, our offense, whatever it may be. He makes the guys around him better.”

McDaniels’ comments on Stidham were less effusive and seemed to be aimed at combating the widespread praise the Auburn product has received since training camp began. He noted that Stidham, like most rookies, “gets yelled at every day in practice, multiple times” and has “huge room for improvement.”

?Jarrett, I think he?s a good kid,” McDaniels said. “He loves football. He?s a hard worker. He comes in every day, he makes mistakes every day, like they all do as rookies, and he gets better. He takes coaching, he listens well and he can improve from one day to the next if he?ll just take the things we?re talking about in the meeting room and then apply them on the field the next day. He?s demonstrated toughness. He?s taken some hits. He?s been accurate when we?ve given him time to throw. And generally speaking, he?s run the offense somewhat the way we would like him to run it.

“Again, there?s huge room for improvement. I don?t think there?s a rookie in the National Football League after three preseason games that you wouldn?t say that about. So our goal is just to get a little better every day with him. But we?re happy with all the guys we have right now in that room. They?re all doing some really good things, they?re all working hard to try to get better, and they all push each other.? 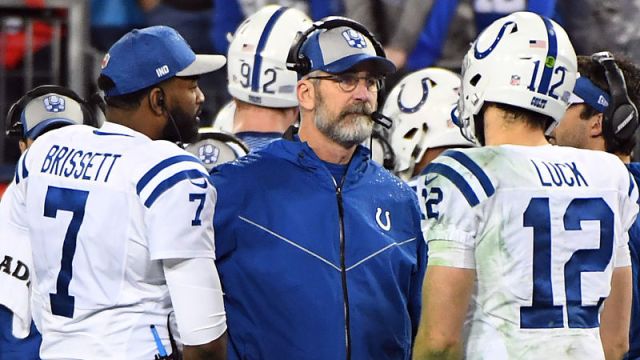 Andrew Luck Embraced Reality Of NFL Before Deciding To Retire 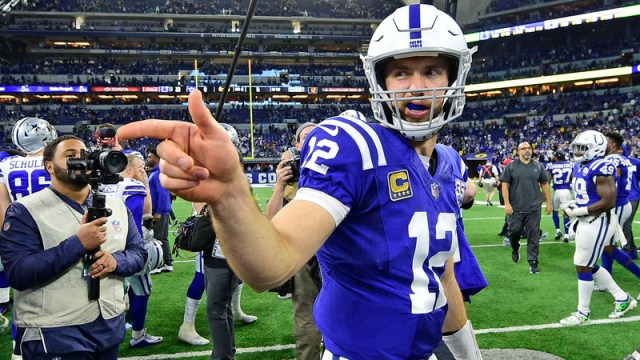