FOXBORO, Mass. — The sentiment of the New England Patriots’ locker room Wednesday could be summed up in these two sentences from special teams captain Matthew Slater:

“We’re trying to go about preparation and being ready to play a game on Sunday. But certainly, I’m sensitive to this situation and what is out there.”

The situation involves newly signed Patriots wide receiver Antonio Brown, who signed with the team Monday and practiced for the first time Wednesday. On Tuesday, a former trainer of Brown’s, Britney Taylor, filed a federal civil lawsuit alleging the wideout sexually assaulted her on two occasions in June 2017 and forcibly raped her in May 2018.

Brown strongly denied these allegations Tuesday night, and his agent Drew Rosenhaus, did the same Wednesday, calling the lawsuit a “money grab” during a “SportsCenter” interview.

There have been reports of Roger Goodell potentially placing Antonio Brown on the commissioner’s exempt list, but as of Wednesday afternoon, that had not happened. The 31-year-old remains eligible to practice with the team and could make his Patriots debut this Sunday against the Miami Dolphins.

Asked about the allegations against Brown following Wednesday’s practice, multiple Patriots players said they aren’t jumping to conclusions about a player they hardly know.

“This is really the first day we got a chance to practice with him,” Slater said. “So I’m still getting to know him as he is getting to know all of us. So I think it’s a little early on to really comment on (what he’s like as a teammate). … It’s a little hard to know the truth about situations you’re not directly involved in, and for you to try to speak to situations or speak to people that you know nothing about, I think is unwise. I think you have to try to keep an open mind and treat situations as they come day by day.”

Slater said he views the Patriots’ locker room as a brotherhood of players who support one another. But that brotherhood, he said, takes time to forge and is built on “accountability and trust.”

“I believe that when you come in this locker room and you have a locker in this particular locker room that it’s always been a family environment — a brotherhood,” Slater said. “You always try to support people that are working alongside you to achieve a common goal. But again, this is a unique situation. I don’t want to minimize the serious nature of it. But again, I don’t feel as though I’m qualified to really speak to it because I don’t know anything about it.”

Asked what a new player joining the Patriots should know, Slater replied: “No one is bigger than the team.”

“We’re all here to try to support one another, build one another up and accomplish something that’s really bigger than ourselves,” the 12th-year pro said. “That’s what a team is about. No one individual is bigger than the team. It’s about working together as a family toward a common goal, checking your ego at the door, sometimes putting personal goals aside to ensure the success of the team.”

Quarterback Tom Brady, who thew passes to Brown for the first time Wednesday, declined to address the allegations levied against his new star receiver. And neither he nor head coach Bill Belichick offered any insight on whether Brown will be active Sunday in Miami.

“It?s serious,” McCourty said of the lawsuit. “I don?t think anybody sits in here and doesn?t realize how serious that situation is and everything. But I think, from a football standpoint, we have to be prepared to go out there and play against the Dolphins on Sunday because that?s what our job calls for us to do.

“I?m sure, just like you guys, everyone in this locker room has different opinions and all of that. But at the end of the day when we come here, our job is to come to prepare and play.? 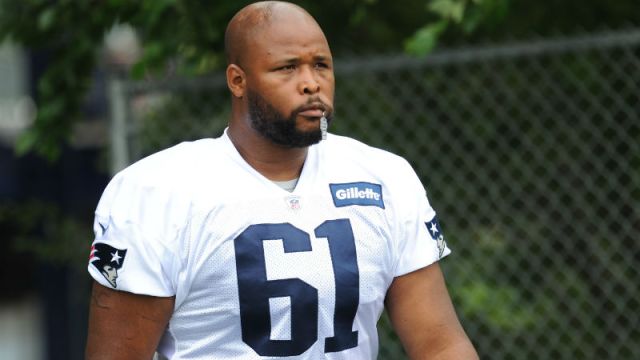