Final, Patriots 30-14: Another dominant defensive performance propelled the New England Patriots to a 30-14 victory over the New York Jets on Sunday at Gillette Stadium.

Tom Brady tossed two touchdown passes in the victory, and Josh Gordon fought off some early struggles and multiple injuries to finish with six catches on 11 targets for 83 yards.

Julian Edelman turned in a strong opening half (seven catches, 62 yards, one touchdown) but suffered a chest injury late in the second quarter and did not return.

Running back Sony Michel scored the Patriots’ first touchdowns but struggled with lead blocker James Develin (neck) sidelined, finishing with 11 yards on nine carries. Rex Burkhead led all Patriots backs in touches with 11 carries for 47 yards and a touchdown and six catches for 22 yards. James White missed the game for the birth of his child.

The win improved the Patriots to 3-0 on the season entering next Sunday’s road game against the Buffalo Bills.

After completing passes to Phillip Dorsett and Rex Burkhead, the rookie QB sailed one that flew over Brandon Bolden’s head and into the arms of safety Jamal Adams, who took it 60 yards the other way for a pick-six.

The Patriots’ offense and special teams now both have allowed touchdowns before New England’s defense.

The score prompted head coach Bill Belichick to make another change behind center. Tom Brady now is back in as the Patriots’ offense returns to the field.

Fourth quarter, 8:41, Patriots 30-7: After another dominant defensive series capped off by a Chase Winovich sack of Luke Falk. The Patriots now are giving Tom Brady the rest of the afternoon off.

Jarrett Stidham is in at quarterback for the Patriots, making his NFL debut.

Fourth quarter, 11:26, Patriots 30-7: The Patriots’ latest drive included a juggling Josh Gordon catch and a reverse to Phillip Dorsett that featured Tom Brady attempting to block Jamal Adams. The drive ends with a punt, however, as New York takes over at its own 8-yard line.

New England officially ruled Julian Edelman (chest) out for the rest of the game. Defensive lineman Adam Butler, who received medical attention after splitting a sack with Dont’a Hightower on the Patriots’ last defensive series, is questionable to return with a leg injury.

Third quarter, 0:21, Patriots 30-7: It took nearly 11 full quarters, but the Patriots finally have surrendered their first touchdown of the season.

It came in the form of a muffed punt by undrafted rookie Gunner Olszewski. Arthur Maulet recovered in the end zone for the Jets.

New England’s defense still has yet to allow an opponent to reach the end zone this season.

Third quarter, 3:07, Patriots 30-0: This has been a painful and, at times, frustrating game for Josh Gordon, but he just pulled down perhaps the best catch any Patriots player has made this season.

The 28-yard circus grab set up a 2-yard touchdown run by Rex Burkhead which pushed the Patriots over the 100-point plateau for the season. They’ve outscored their three opponents 106-3 with one quarter still to play in this one.

It was the third pick in three games for McCourty, who leads the team in that category.

Bad news quickly befell the Patriots’ offense, however, as Josh Gordon appeared to injure his hand or finger while blocking a Jets defender. Gordon was called for a facemask penalty on the play, but the injury was to his other hand.

The wideout keeled over in pain and received immediate medical attention on the New England bench.

With Gordon and Julian Edelman unavailable, Gunner Olszewski subbed in at wide receiver alongside Phillip Dorsett and Jakobi Meyers.

Gordon wasn’t out for long. After the Patriots’ defense forced a Jets three-and-out, the big receiver returned to the field with his left pinky and ring finger taped together.

Third quarter, 13:10, Patriots 20-0: Julian Edelman is questionable to return with a chest injury, per the team. If he cannot, the Patriots will rely on the trio of Josh Gordon, Phillip Dorsett and Jakobi Meyers, with Gunner Olszewski potentially seeing some playing time in four-receiver sets.

New England’s first drive of the second half ended with back-to-back incompletions to Gordon and Dorsett. Bill Belichick challenged the latter, but the call on the field stood, ending Dorsett’s streak of 26 consecutive receptions.

Third quarter, 15:00, Patriots 20-0: Josh Gordon is on the sideline to begin the second half. Julian Edelman is not.

We’re awaiting an official announcement from the team on the status of Edelman’s injury.

Halftime, Patriots 20-0: The Patriots are in total command of this game, but their top two receivers both appeared to suffer injuries during the final minutes of the first half.

Josh Gordon gingerly walked off the field and was examined in the sideline medical tent after landing hard following a defensive pass interference penalty deep downfield. He emerged from the tent after a few minutes and remained on the bench.

Julian Edelman came up holding his ribs/midsection after a catch with 1:20 remaining in the half. He quickly exited down the tunnel toward the locker room.

We’ll see if either wideout remains in the game once the third quarter begins.

Second quarter, 2:00, Patriots 20-0: We’ve seen punts on the last five consecutive possessions. The Patriots now are facing a third-and-3 from their own 22-yard line.

Second quarter, 9:59, Patriots 20-0: After extending New England’s latest drive with an illegal hands to the face penalty on third-and-16, the Jets finally forced the Patriots to punt for the first time today.

New York’s offense nw will look to pick up its first first down since the game’s opening minute.

Second quarter, 11:31, Patriots 20-0: The Jets’ latest possession began with a facemask penalty on center Ryan Kalil and ended with yet another Lachlan Edwards punt.

Luke Falk nearly threw an interception to Stephon Gilmore on second down, but the cornerback was unable to get both feet down in bounds. The Jets proceeded to call a draw to Le’Veon Bell on third-and-21 and booted the ball back to the Patriots, who have found the end zone on each of their first three possessions.

Julian Edelman padded his squad’s advantage by hauling in a 3-yard touchdown pass from Tom Brady, who absorbed contact from defensive lineman Kyle Phillips as he released the ball.

The touchdown was Edelman’s second third-down conversion on the drive. He also had a 15-yard reception on third-and-9 after a bad drop one play earlier.

Jakobi Meyers set up Edelman’s score with an 18-yard catch-and-run down the sideline that brought New England into the red zone.

The only skill players without a catch (Gunner OIszewski, Damien Harris and Jakob Johnson) haven't played on offense.

First quarter, 3:06, Patriots 13-0: The Jets’ offense is stuck in neutral. They just had their second straight three-and-out, with Michael Bennett sacking Luke Falk on first down and a screen pass to Robby Anderson gaining zero yards on third-and-9

The Patriots took advantage of a short field after a Jets punt, driving 45 yards in just three plays to extend their lead.

Tom Brady found Josh Gordon for 17 yards before connecting with Phillip Dorsett on a 25-yard catch-and-run touchdown. Dorsett, who found himself wide open after the Jets’ linebackers bit on a play fake to Sony Michel, now has caught a remarkable 25 consecutive regular-season passes from Patriots quarterbacks.

Stephen Gostkowski drilled the extra point this time around.

First quarter, 5:47, Patriots 6-0: The Patriots’ defense smothered the Jets on their second possession, forcing a three-and-out.

Jamie Collins continued his excellent play with an 8-yard sack on second-and-7, and a conservative play call on third-and-15 resulted in Le’Veon Bell being buried in the backfield by Duron Harmon.

The Patriots will take over near midfield.

Tom Brady threw on each of the first eight snaps, completing seven passes — including a 41-yarder to a wide-open Ryan Izzo off play-action — before handing the ball to Sony Michel for a 5-yard touchdown that opened the scoring.

The @Patriots 90-yard drive is capped off by a Sony Michel TD! @Flyguy2stackz #GoPats #NYJvsNE

The Patriots were forced to settle for six points after Stephen Gostkowski shanked the ensuing extra point — his fourth miss in two games.

First quarter, 12:26, 0-0: The Jets picked up a quick first down on a 15-yard pass from Luke Falk to Jamison Crowder, but their opening drive stalled shortly thereafter.

Falk failed to connect with Braxton Berrios deep on third-and-6, sending out the punting unit. It was the first NFL target for the former Patriots wide receiver/return man.

First quarter, 15:00, 0-0: The Patriots won the opening coin toss and chose to defer. Luke Falk and the Jets begin the game with the ball here on a gorgeous afternoon in Foxboro.

? With LaCosse inactive, the Pats will be down to one tight end (Ryan Izzo) for the second time in three weeks.

? Running back Damien Harris, cornerback Joejuan Williams and fullback Jakob Johnson will make their NFL debuts. Harris and Williams were healthy scratches in Weeks 1 and 2.

11 a.m. ET: Good morning from Gillette Stadium, where the New England Patriots are preparing to host the New York Jets in Week 3 of the NFL season.

Today?s game is the Patriots? first since they released wide receiver Antonio Brown, whose regrettable 11-day tenure officially came to an end Friday.

While Brown?s dismissal was this week?s most notable development, New England also will be without three key offensive contributors for this matchup with the 0-2 Jets.

Left tackle Isaiah Wynn was placed on injured reserve this week. He?ll be replaced by veteran journeyman Marshall Newhouse, who made his Patriots debut in last week?s 43-0 rout of the Miami Dolphins.

Fullback James Develin will miss his first game since 2015 after being ruled out with a neck injury. That injury prompted the Patriots to make a roster move, which saw German rookie fullback Jakob Johnson promoted from the practice squad on Saturday. Johnson is the first player from the NFL?s International Pathway Program to earn a spot on a team?s 53-man roster

Running back James White also is expected to miss today?s game for the birth of his child, according to a report this morning from ESPN?s Adam Schefter. The same circumstances sidelined linebacker Kyle Van Noy in Week 1.

White?s absence likely will result in an increased role for fellow dual-threat back Rex Burkhead and could result in rookie Damien Harris being inserted into the 46-man gameday roster for the first time.

The Jets are missing their top two quarterbacks with Sam Darnold out with mononucleosis and Trevor Siemian on IR with a severe ankle injury. Luke Falk, a 2018 sixth-round pick, will make his first NFL start.

The Patriots entered the day as 21-point favorites. Kickoff is set for 1 p.m. Keep it locked here for full coverage. 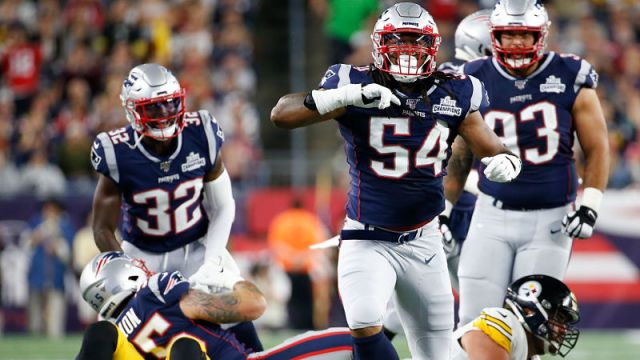 How Dominant Has Patriots Defense Been Of Late? This Graphic Paints Picture 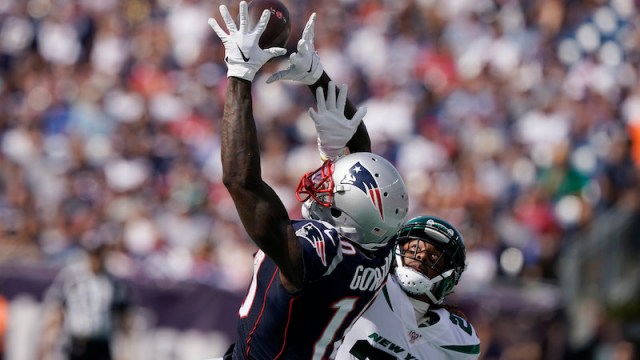 Patriots-Jets Standouts: Who Helped New England Most In 30-14 Drubbing?