Patriots Vs. Steelers Preview: What To Watch For In Week 1 Matchup - NESN.com Skip to content

The New England Patriots and Pittsburgh Steelers will renew one of the NFL’s best inter-divisional rivalries Sunday night when they meet at Gillette Stadium to open the 2019 regular season.

THE ODDS
The Patriots entered the weekend listed as 6-point home favorites over the Steelers, who are seeking their first win in Foxboro, Mass., since 2008. That victory came over a Patriots team quarterbacked by Matt Cassel. Steelers quarterback Ben Roethlisberger is 0-4 in road games against Tom Brady.

New England is 11-4 overall against Pittsburgh during the Brady/Bill Belichick era and 5-1 at home, but the Steelers took the most recent meeting, winning 17-10 at Heinz Field last December to snap a five-game losing streak in the series.

This will be the sixth encounter between the Patriots and Steelers since the start of the 2015 season. They also squared off in the season opener that year, with New England winning 28-21 after raising its Super Bowl LI champions banner.

The Patriots will unveil their Super Bowl LIII banner in a pregame ceremony Sunday night and will wear commemorative championship patches during the game.

INJURY REPORT
Wide receiver Demaryius Thomas (hamstring), tight end Matt LaCosse (ankle) and safety Obi Melifonwu (ankle) are listed as questionable for New England. Wideout Julian Edelman is in the clear after appearing to tweak his thumb during last week’s preseason finale. He was a full participant in practice this week and has not been listed on the injury report.

PLAYERS TO WATCH
Josh Gordon, Patriots wide receiver
This will be Gordon’s first meaningful football game since the NFL indefinitely suspended him last December. He wasn’t reinstated until after training camp concluded and looked a bit rusty in his lone preseason appearance, catching just two passes on six targets from backup quarterback Jarrett Stidham. It could take Gordon a few weeks to work his way back into game shape. When he’s on, though, he’s New England’s most physically gifted pass-catcher and its most dangerous downfield threat.

J.C. Jackson, Patriots cornerback
Jackson made headlines this week when he said Pittsburgh’s JuJu Smith-Schuster, while “great,” is not one of the NFL’s best receivers. Jackson did make Smith-Schuster look rather pedestrian when these teams met last season (four catches, 10 targets, 40 yards, no touchdowns), so it’ll be interesting to see if the two are matched up again in the rematch. With Antonio Brown gone, Smith-Schuster is the Steelers’ unquestioned No. 1 wideout, so the Patriots could instead stick top corner Stephon Gilmore on him, leaving Jackson, Jason McCourty and Jonathan Jones to handle some combination of Donte Moncrief, James Washington, Diontae Johnson and Ryan Switzer.

Isaiah Wynn, Patriots left tackle
Wynn’s long-awaited regular-season NFL debut will come against a defensive front that led the NFL in sacks last season. The 2018 first-round draft pick should have the easier of the two edge rusher matchups, as he’ll likely spend most of the game opposite Bud Dupree (zero pressures vs. Trent Brown last season) while right tackle Marcus Cannon deals with T.J. Watt, whom Bill Belichick called one of the best pass rushers the Patriots will face all year. Belichick also had high praise for defensive lineman Stephon Tuitt, who will challenge new starting center Ted Karras inside.

James Conner, Steelers running back
Thanks to Le’Veon Bell’s season-long holdout, Conner has served as Pittsburgh’s No. 1 running back since last September. This will be the Patriots’ first time seeing the 2018 Pro Bowler in that role, however, as he missed last year’s meeting with an injury. New England utilized lighter defensive personnel throughout that game, and third-string running back Jaylen Samuels gashed them for 142 rushing yards (7.5 per carry). Don’t expect the same approach against Conner, who rushed for 973 yards and 12 touchdowns in 13 games last season.

Devin Bush, Steelers linebacker
Though much of the Steelers’ 2018 defense remains intact, they’ve made some notable changes at linebacker, adding more speed at the position by signing converted safety Mark Barron and trading up in the 2019 NFL Draft to select Bush at No. 10 overall. Barron likely will play more Sunday — coach Mike Tomlin said the team will “manage” Bush’s snaps in the opener — but the rookie out of Michigan carries higher expectations, having been touted as a worthy successor to Ryan Shazier in the center of Pittsburgh’s defense.

Steven Nelson, Steelers cornerback
Nelson will join former Pro Bowler Joe Haden in the starting lineup after jumping from the Chiefs to the Steelers in free agency, and Pittsburgh hopes he’ll be an upgrade over the disappointing Artie Burns. Nelson has had his issues against the Patriots in the past, though. He allowed five catches for 82 yards in the 2018 AFC Championship Game, including a 29-yard touchdown pass to Phillip Dorsett, and was hit with a 37-yard pass interference penalty during Kansas City’s regular-season visit to Foxboro. 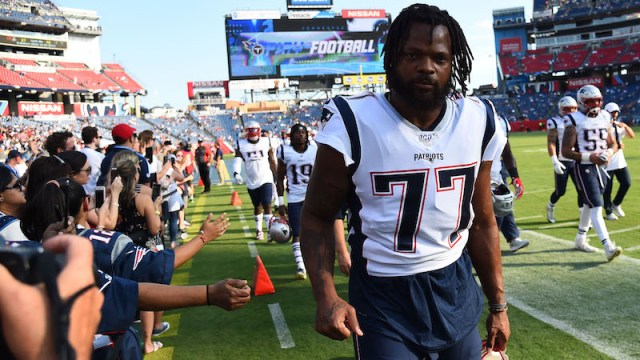