There’s been a lot to like about the Boston Bruins’ play out of the gates thus far.

But perhaps the most notable, yet least surprising highlight, for the Black and Gold has been the goaltending. Boston had perhaps the best one-two punch in goal last season with Jaroslav Halak and Tuukka Rask, and that combination is shaping up to be a formidable one once again.

On Saturday, it was Rask stopping 31 pucks to notch his first shutout of the season in a 3-0 win over the New Jersey Devils in the the B’s home opener at TD Garden.

The Bruins jumped out to a quick 2-0 lead, but it was Rask who was called upon often in the second period after number of key breakdowns in the defensive zone. Rask came up big with 15 stops and allowed Boston to extend its lead heading into the third.

The busy second period led Rask to crack a bit of joke regarding his solid play in the early goings of the season.

“You know it’s the age I guess, when you get older you can’t move too much out there, you just try to be patient,” Rask said, as seen on “Bruins Overtime Live.” “Sometimes it looks easy, sometimes it doesn’t. But, you know, I have felt good the past couple of games I have played, and I’ll try to keep that going, continuing it from the playoffs.”

Rask, 32, was phenomenal last spring, and certainly is looking to build off the 2.02 goals against average and .934 save percentage he posted in the playoffs.

“This summer I just tried to kind of take it easy and relax and get my mind back to normal. It’s a grind during the playoffs,” Rask continued. “When you get experience in this league you kind of know what you have to do and what you don’t have to do. I came to camp, I was in shape, but I wasn’t too worried about what my game was going to look like. I was going to take it day-by-day and try to get that feeling back I had from April to June and so far it’s working.”

— It was the 46th shutout of Rask’s career, which sits second in franchise history behind Tiny Thompson’s 74.

Rask also has found tons of success against the Devils of late, with a 4-1-0 record, 1.20 GAA and .964 save percentage over his last five games.

— Brad Marchand buried his fourth goal of the season, and picked up a milestone assist in the victory.

His helper on Patrice Bergeron’s power play goal was the 300th of his career.

— The Bruins did well to come home to Boston 3-1-0 after a rather grueling road trip to start the season.

And Jake DeBrusk admitted that the legs were feeling a bit heavy a day off the team getting in from Colorado.

“To be honest I was pretty bagged. … I guess in warmups a couple guys were making comments about it. It was a tough travel day, but that’s our jobs,” DeBrusk told Sophia Jurksztowicz on NESN’s postgame coverage. “We like to compete and we like to try to win a game and obviously you want to bounce back against a hungry New Jersey team, so we knew it wasn’t going to be easy. We just tired to keep the shifts short, play our game and we got a couple goals early and it just rolled from there.”

— Saturday was an announced sellout, but the figure may look a bit different to fans due to construction at TD Garden.

The Bruins announced a sellout attendance of 17,193, with areas of Levels 8 and 9 still under construction. https://t.co/5myzNWSj4L 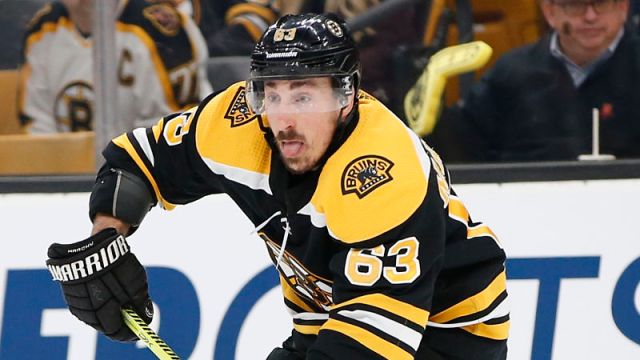