Building the perfect lineup for your season-long fantasy football league can be difficult.

Between battling bye weeks, scoping out the most advantageous matchups and keeping an eye out for who your opponent is starting, trying to trot out the perfect nine players can create quite a few headaches.

So while you deal with that, let us help you construct an ideal roster for Week 5 of daily fantasy football.

Here’s our “optimal lineup” for DraftKings’ main Sunday slate (early afternoon and late afternoon games), which allots a $50,000 budget for a roster of nine players.

Quarterback: Jameis Winston, Tampa Bay Buccaneers ($6,200)
Winston posted one of the more impressive performances of his career in Week 4. The Bucs QB had his way with the reigning NFC champions, carving up the Los Angeles Rams in their own building for 385 passing yards with four touchdowns. Next on the docket for Winston is a tough divisional matchup in New Orleans against the Saints, whose defense is coming off a stellar performance against the Dallas Cowboys. The fifth-year signal-caller still is worth giving a go, however, as the Saints are second-worst in the league in fantasy points per game allowed to quarterbacks. Don’t be surprised if this one turns into an offensive affair.

Running Backs: David Johnson, Arizona Cardinals ($7,500); Austin Ekeler, Los Angeles Chargers ($6,700)
The Cardinals find themselves in a prime position to notch their first win of the season this Sunday against the lowly Bengals. Cincinnati has had no answers for running backs through the first quarter of the campaign, and Johnson is one of football’s best dual-threats out of the backfield. You can expect Kyler Murray to turn to Johnson early and often in this Week 5 clash.

Yes, Melvin Gordon is back, but Ekeler still makes for a high-end fantasy play, at least for now. Gordon likely will need to ease into game action, and the Chargers would be doing themselves a disservice by phasing out Ekeler, who is second behind Christian McCaffrey in fantasy points scored by RBs this season. The case can be made Ekeler is a better pass-catcher than Gordon, too. As such, Ekeler likely still will field a fair amount of touches against the Denver Broncos, whose already mediocre defense grew worse with the loss of Bradley Chubb.

Wide Receivers: Adam Thielen, Minnesota Vikings ($6,700); Calvin Ridley, Atlanta Falcons ($4,900); Phillip Dorsett, New England Patriots ($4,900)
Kirk Cousins heard Thielen loud and clear. The star wideout expressed his frustration with the Vikings’ passing game following their loss to the Chicago Bears, and Minnesota’s QB took the criticism in stride. The Vikes will have a golden opportunity to bounce back Sunday against the New York Giants, who’ve struggled against the pass all season. And if the bizarre Stefon Diggs situation prolongs, it only will open the door for more opportunities for Thielen.

It might seem dramatic to use the label this early in the season, but Week 5 probably can be chalked up as a “must-win” for the Falcons, who currently sit at 1-3. The Texans by and large have been strong defensively in 2019, but they have moderately struggled against the pass. Houston likely will fixate the bulk of its attention on Julio Jones, which could pave the way for a big performance from Ridley.

The Patriots have gone from featuring the best WR group in football to having major concerns over their pass-catchers. New England has received no production from its tight ends, and Julian Edelman and Josh Gordon both appear to be dealing with minor injuries. Enter Dorsett, who routinely delivers when called upon. The wide receiver could see an uptick in targets against the Washington Redskins, who’ve allowed a league-worst eight touchdowns to wideouts this season.

Tight End: Darren Waller, Oakland Raiders ($5,000)
Waller has been one of the few bright spots for the Raiders. The “Hard Knocks” star currently leads all tight ends in receptions (33) and is third among players at the position in receiving yards (320). Waller will have his work cut out for him against the vaunted Bears, but he should see a high number of targets, especially if Tyrell Williams is unable to play.

Flex: Jaylen Samuels, Pittsburgh Steelers ($4,100)
As James Conner continues to deal with his struggles, the Steelers might start leaning more on Samuels, who was awfully productive in a “Monday Night Football” win over the Bengals. Samuels rushed for a score and also caught eight passes for 57 yards. The Baltimore Ravens have struggled to defend running backs through four weeks, as they’ve allowed a league-worst six touchdowns on the ground. Steelers-Ravens matchups always are slugfests, which is the type of tilt the 6-foot, 225-pound should thrive in.

Defense: Philadelphia Eagles ($3,700)
It’s still unknown whether Sam Darnold will return under center for the New York Jets this week, but the Eagles’ defense is a good play either way. Le’Veon Bell could be in store for a frustrating afternoon, as Philadelphia has allowed the fifth-fewest rushing yards this season. The Birds dealt with some defensive woes early in the campaign, but the unit likely will be playing with new-found confidence after earning a win in Green Bay over Aaron Rodgers and Co. 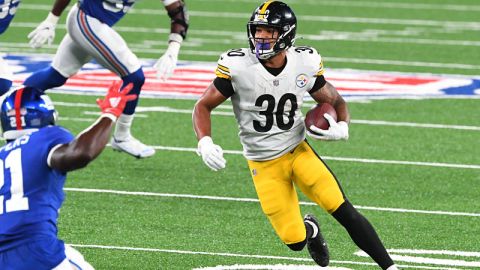