FOXBORO, Mass. — Final, Patriots 27-13: Two Julian Edelman touchdowns and another fear-inspiring performance by New England’s defense propelled the Patriots to a 27-13 victory over the Cleveland Browns on Sunday at Gillette Stadium.

New England forced turnovers on three consecutive plays during the first quarter, one of which resulted in a touchdown for linebacker Dont’a Hightower. The Patriots also sacked Baker Mayfield five times, with Adam Butler and Jamie Collins leading the way with two and 1 1/2 takedowns, respectively.

Edelman led all receivers with eight catches for 78 yards and two scores, and running back James White added 75 yards on four carries, 59 of which came on a pivotal screen pass midway through the third quarter.

Discipline was an issue for the visitors, who fell to 2-5 in the Freddie Kitchens era. Cleveland committed 13 accepted penalties for 85 yards. New England had three for 15 yards.

The win pushed the Patriots to a perfect 8-0 at the midway point of their 2019 schedule and was the 300th of Bill Belichick’s illustrious head-coaching career. They’ll hit the road next Sunday for a primetime matchup with the Baltimore Ravens.

Fourth quarter, 4:07, Patriots 27-10: The Browns lined up to punt on fourth-and-11 from their own 24, committed a false start, then, for some reason, elected to go for it on fourth-and-16. Adam Butler and Chase Winovich teamed up to sack Baker Mayfield, turning the ball over on downs and all but sealing a Patriots victory.

Mike Nugent missed badly on a 34-yard field-goal attempt on the ensuing drive. Nugent is 2-for-4 today with one miss and one block.

Fourth quarter, 7:43, Patriots 27-10: Big plays by some new (or new-ish) Patriots pass-catchers on this latest drive:

— 26-yard completion to Ben Watson down the seam.

The drive ended in Mike Nugent’s second made field goal of the night, this one from 29 yards out.

Fourth quarter, 12:46, Patriots 24-10: An offensive pass interference penalty on Browns receiver Antonio Callaway — who set an illegal downfield pick on Jason McCourty — wiped out a 27-yard gain on third-and-3. After Stephon Gilmore broke up a pass on the ensuing play, Cleveland punted.

Freddie Kitchens challenged the penalty to no avail. He was 0-for-2 on challenges today.

Third quarter, 2:15, Patriots 24-10: The Browns and Patriots traded quick series, with Cleveland going three-and-out and New England picking up one first down before punting.

It’s Browns ball at their own 15 after a 51-yard punt by Jake Bailey.

Third quarter, 6:11, Patriots 24-10: If the Patriots wind up pulling away for a comfortable win, we’ll look back on one play James White made on this most recent drive as the pivotal momentum-shifter.

Facing third-and-10 after incompletions to Jakobi Meyers and Mohamed Sanu, White caught a screen pass in open space and, guided by guards Joe Thuney and James Ferentz, took off downfield, winding through Cleveland defenders for a 59-yard gain.

Another screen pass to Rex Burkhead two plays later picked up nine yards and moved the Patriots into the red zone, and Tom Brady found Julian Edelman two plays after that for a 14-yard touchdown.

Right tackle Marcus Cannon helped make the score happen by locking up Myles Garrett in pass protection. It was Edelman’s second touchdown of the game.

The Patriots also used Brandon Bolden as a fullback on a third-and-1 run by Sony Michel — the fifth different player they’ve used in that spot in the last two games. Michel picked up two yards to move the chains, and Edelman scored on the ensuing snap.

Corralling Nick Chubb continues to be a problem for the Patriots’ defense, which is allowing 7.5 yards per carry and 6.0 yards per play. Chubb, who had two early, costly fumbles, is up to 120 yards on 16 carries.

A Jamie Collins sack on third-and-4 forced the field-goal try.

The Browns, who’ve been able to move the ball reasonably well when they’re not turning it over, will receive the second-half kickoff.

Second quarter, 2:19, Patriots 17-7: After a quiet first quarter-and-a-half, Mohamed Sanu came through in a big spot for the Patriots, hauling in a four-yard catch from Tom Brady to move the chains on fourth-and-4.

It was the veteran wideout’s first reception in a Patriots uniform. Cleveland challenged the play, but the ruling stood. Quick throws to Sanu should have a prominent place in New England’s playbook on third and fourth downs moving forward.

The Patriots failed to capitalize, however. Mike Nugent’s 29-yard field goal was blocked.

Second quarter, 7:44, Patriots 17-7:  The Browns are on the board, with Baker Mayfield connecting with tight end Demetrius Harris for a 21-yard touchdown.

Linebacker Dont’a Hightower had Harris in man coverage on the play, and he looked a bit uncomfortable as the big tight end turned upfield toward the end zone. Harris was able to stop, turn, catch Mayfield’s pass and dive across the goal line without much resistance.

It was just the second passing touchdown allowed by the Patriots’ defense this season.

The Browns didn’t turn the ball over on their latest possession, which included carries of 16 and 12 yards by their young running back, but they couldn’t manage any points, either. They punted after failing to pick up a first down on third-and-19.

The Patriots, whose offense hasn’t looked particularly dangerous thus far, either, went three-and-out on the ensuing possession. Justin Bethel and Matthew Slater teamed up to force a muff on Jake Bailey’s punt, but Cleveland recovered.

The Patriots’ defense has forced a turnover on each of the Browns’ last three plays. Seriously.

Their latest takeaway was a defensive lineman’s dream: Baker Mayfield sending a shovel pass directly to Lawrence Guy, who caught it for the first interception of his NFL career.

On the first snap following his fumble, Nick Chubb took a handoff from Baker Mayfield, broke through multiple Patriots and raced 48 yards downfield before Jones caught him from behind and punched the ball loose. Devin McCourty recovered, giving New England its second takeaway in as many plays.

The Patriots struggled to move the ball on the ensuing possession, picking up one first down — on a third-down completion to Phillip Dorsett — before punting.

A stray foot from guard Joel Bitonio knocked the ball out of running back Nick Chubb’s hands, and linebacker Dont’a Hightower scooped it up and returned it 26 yards for a touchdown.

First quarter, 6:35, Patriots 3-0: After a Browns three-and-out, the Patriots staged a 12-play, 71-yard drive that culminated in a 20-yard field goal by Mike Nugent.

The two key plays on the drive were a 33-yard completion from Tom Brady to Phillip Dorsett on third-and-6 and a 10-yard pickup by Julian Edelman on fourth-and-7.

The Patriots turned down a 51-yard field-goal try to go for it on fourth down, continuing a trend that’s persisted since Nugent replaced Stephen Gostkowski in Week 6. They clearly don’t have much confidence in Nugent’s range, especially in sloppy conditions like these.

New England wound up driving to Cleveland’s 2-yard line before Sony Michel was stuffed for no gain (with linebacker Elandon Roberts lead-blocking) and Brady nearly threw his third end-zone interception of the season. Cornerback Denzel Ward couldn’t hold on, and the Patriots settled for a chip-shot field goal.

First quarter, 13:27, 0-0: The Patriots employed a similar strategy to the one they used last week in New York. Two TEs on their first two snaps, then four WRs on their next two. Tom Brady fired incomplete to Mohamed Sanu on second-and-9 and threw the ball away while pressured on third down, leading to a Patriots punt.

Let’s see what Baker Mayfield can do against this New England defense.

First quarter, 15:00, 0-0: The Browns won the opening coin toss and deferred. It’ll be Patriots ball to start things off here in rainy Foxboro.

3:56 p.m.: Some observations from pregame warmups:

— Mohamed Sanu practiced returning punts with Gunner Olszewski. Sanu doesn’t have a ton of return experience, but he did return one punt for the Atlanta Falcons earlier this season.

— With the slick surface, Tom Brady eschewed his traditional full-field jog as he took the field.

— Julian Edelman and Phillip Dorsett were the Patriots’ top two wideouts in warmups. Sanu lined up in the slot in three-receiver sets.

— It appears James Ferentz will start at right guard with Shaq Mason out. Ferentz has played just 24 offensive snaps over the last two seasons and has never started a game in the NFL. He gets the nod over Jermaine Eluemunor.

Losing Shaq Mason, who’s dealing with an ankle injury, is a significant blow to a Patriots O-line that already was playing without two starters (Isaiah Wynn and David Andrews). Expect either Jermaine Eluemunor or James Ferentz to slot into the starting lineup.

Running back Rex Burkhead (missed last three games) and safety Patrick Chung (missed two of last three) both are active after being listed as questionable.

Because they never filled Michael Bennett’s spot on the 53-man roster after trading him to the Dallas Cowboys, the Patriots only needed to declare six inactives rather than the customary seven.

12:30 p.m.: The Patriots are expected to have Rex Burkhead active for this game, according to a report from ESPN’s Adam Schefter — a big boost for their backfield.

Burkhead, who missed the last three games with a foot injury and was severely limited in Week 4, was the Patriots’ most effective all-around back over their first three games, totaling 222 yards from scrimmage on 37 touches in wins over the Pittsburgh Steelers, Miami Dolphins and New York Jets.

Having Burkhead back likely will push rookie Damien Harris off the 46-man gameday roster. Cornerback Joejuan Williams also likely will be inactive.

The look of a rookie working to be the best at his craft: On a rainy Sunday morning, with a 4:25 p.m. ET kickoff, @JoejuanW runs sprints in the 10 o?clock hour under the watch of assistant strength coach Deron Mayo.

(This is also an indication Williams is likely inactive today) pic.twitter.com/y0tyj8AeDk

10:30 a.m. ET: Good morning from a rain-soaked Gillette Stadium, where wet and sloppy conditions are expected for this afternoon’s matchup between the 7-0 New England Patriots and the 2-4 Cleveland Browns.

The Patriots are looking to remain undefeated after demolishing the New York Jets last week, while the Browns, who boast one of the NFL’s more talented rosters, are seeking a post-bye bounce-back after an inauspicious start to the Freddie Kitchens era.

Despite Cleveland’s offensive talent, the Patriots’ top-ranked defense faces another favorable matchup against second-year quarterback Baker Mayfield, who earned Offensive Rookie of the Year honors last season but currently leads all NFL QBs with 11 interceptions in six games. New England in 13-0 against second-year QBs since 2013, and it’s already succeeded in flummoxing 2018 first-rounders Josh Allen and Sam Darnold this season, holding them to a combined zero touchdowns with seven interceptions in Weeks 4 and 7.

Don't be surprised if the #Browns offensive line reconstruction is pretty extensive and potentially continues with in-game shuffling. Big challenge for that unit as they face a #Patriots defense that's – to this point- making the '85 Bears and 2000 Ravens look pedestrian.

Downfield, it’ll be fascinating to watch the battle between Stephon Gilmore and Odell Beckham Jr. — the NFL’s best corner against one of its elite receivers. Gilmore has been simply unbeatable over the last two weeks, allowing two catches on 11 targets for 19 yards with two interceptions and four pass breakups.

The biggest challenge facing the Patriots in this game might be Browns pass rusher Myles Garrett, the league’s co-sacks leader. Keeping him away from Tom Brady will be priority No. 1 for tackles Marshall Newhouse and Marcus Cannon.

In a fitting bit of symmetry, Patriots coach Bill Belichick has an opportunity to earn his 300th career victory against his former team. Belichick, who coached the Browns for five seasons in the early 1990s, scored his first NFL victory against New England on Sept. 8, 1991.

Kickoff for this one is set for 4:25 p.m. ET. Be sure to follow along throughout the day for full pregame coverage. 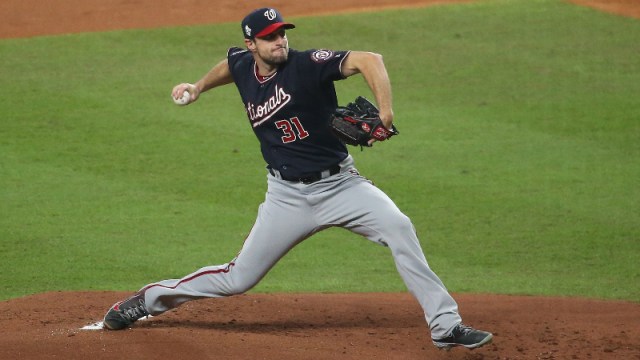 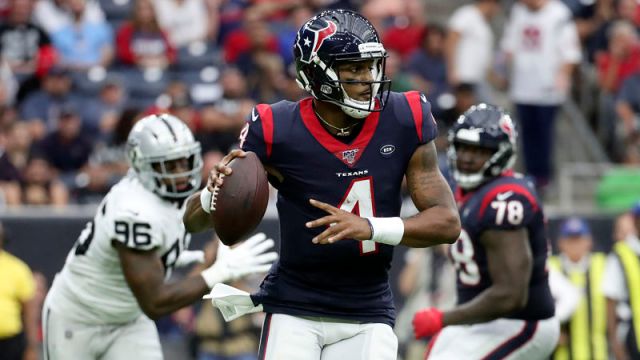