It took the Bruins a little bit of time to wake up on Black Friday, but once they did it was something else.

The B’s erased a two-goal deficit to the New York Rangers, and David Krejci’s goal in overtime gave the Bruins a 3-2 win at TD Garden.

David Pastrnak skated through the neutral zone and made a nice move to burn Henrik Lundqvist, but the winger then slipped the puck to Krejci, who buried the winner at 1:40 in the extra period.

Pavel Buchnevich and Filip Chytil had the goals for the Rangers, while Sean Kuraly and David Pastrnak scored Boston’s other tallies.

Jaroslav Halak made 26 saves for the Bruins, while Lundqvist turned away 24 shots for New York.

RANGERS DRAW FIRST BLOOD
The opening period moved quickly thanks to seemingly nonstop action, and it was the visitors that ended the first 20 minutes ahead.

Kuraly was whistled for tripping at 12:09, and just seconds after he was released the Rangers potted the first goal of the game.

Tony DeAngelo got the puck along the half boards on a point pass from Jacob Trouba, and instead of firing off a shot from a bad angle, DeAngelo fed the puck to Buchnevich in the slot. Buchnevich created a little space and unloaded a shot that went through the legs of Brendan Lemieux, before beating Halak — who was playing without his stick after it was knocked away from Charlie McAvoy — far post at 14:14.

The Rangers would have been up by two goals if not for an impressive save earlier in the period by Halak.

The SAVE from Jaro and the CALL from Doc.

Everyone is on their A game today! pic.twitter.com/CvqFFRDxsq

GETTING INTERESTING
Sloppy play continued for the Bruins into the middle period, but a goal with 1:32 left in the frame sent them into the second intermission down 2-1.

After a little over six minutes of play in the period, Danton Heinen gave the puck away in the neutral zone, with Artemi Panarin intercepting Heinen’s pass attempt and quickly gaining the offensive blue line. At the last second, Panarin slipped a pass to Ryan Strome, whose one-timer was stopped by Halak but resulted in a juicy rebound. Chytil came crashing in and cleaned up the loose puck at 6:21.

The Bruins could have ended up in some real trouble later in the period, with penalties against Matt Grzelcyk and Sean Kuraly giving the Rangers 62 seconds of 5-on-3. But the Bruins did a fine job of successfully killing those penalties, and they were rewarded later in the period.

With less than two minutes to play, Jake DeBrusk carried the puck around the boards, ultimately making his way up to the point before throwing it to the net. Both Kuraly and Jack Studnicka were just in front of the crease, and Kuraly managed to deflect the puck. Lundqvist got a piece of it, but in doing so deflected it into his own net at 18:28, which cut Boston’s deficit to one.

TO OT WE GO
The Bruins drew level just a few minutes into the third period, and the score remained even at two after 60 minutes, forcing overtime.

Torey Krug flipped a puck from the defensive to offensive end of the ice, and Pastrnak was first to it, but whiffed on the shooting attempt. Brady Skjei got the puck and went out wide, but DeBrusk gained possession on the forecheck, then carried the puck behind the net. DeBrusk slipped a pass to David Krejci on the doorstep, but Krejci’s one-timer was deflected out wide, where Pastrnak was waiting in his office to bury his 24th goal of the season at 4:27 to equalize.

The Bruins got their first power play opportunity of the game at 10:35, but were unable to cash in. Shortly after the penalty was released, Par Lindholm was whistled for a high-sticking double minor at 12:58. Despite heavy pressure from New York, the Bruins managed to kill the penalty, bringing the Rangers to 0-for-6 on the afternoon in power play efficiency.

KREJCI WINS IT
The 3-on-3 overtime was plenty entertaining, and it was the Bruins that scored the dagger.

After clearing the defensive zone, Krejci left a puck at the red line for Pastrnak. The winger carried the puck deep, drawing some defenders and ultimately Lundqvist before slipping the puck to Krejci in the slot. Krejci had a wide open net, and he had no trouble finishing to give the B’s the win.

UP NEXT
The Bruins will continue their homestand Sunday against the Montreal Canadiens. Puck drop from TD Garden is set for 7 p.m. ET 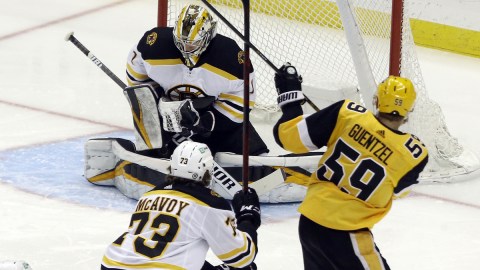