It’s tough to gauge exactly where the New England Patriots’ offense stands after their Week 12 win over the Dallas Cowboys.

At first glance, they didn’t look great in the 13-9 win. But the Cowboys’ offense was worse, and it’s pretty easy to blame the adverse conditions at Gillette Stadium for the struggles. It was windy, rainy and cold throughout the contest. The Patriots got left tackle Isaiah Wynn back, but they were without Nos. 2 and 3 receivers Mohamed Sanu and Phillip Dorsett.

There were plenty of positives and negatives to take away from the offensive performance. We’ll go through all of them below. All stats via Pro Football Focus.

— Wynn struggled a bit in pass protection in his first game back, but he was much better as a run blocker. Overall, he was an upgrade over Marshall Newhouse. He should improve as he gets more and more up to speed. Sunday was just his third NFL game. The most important thing is to keep the 2018 first-round pick on the field.

— Thuney has had a sneaky great season while the rest of the offensive line has had some issues.

— Mason had strung together two impressive performances prior to Week 12. He’s had an up-and-down season.

— Karras played one of his better games of the season.

PASSING GAME
QB Tom Brady completed 17 of 37 passes for 190 yards with a touchdown and no turnovers. He was sacked twice.

Of Brady’s 20 incompletions, six passes were dropped, three were thrown away and one was batted. He had an accuracy rate of 69.7 percent. So, while there were plenty of drops Sunday, not all of Brady’s issues can be blamed on his receivers.

He went 3-of-10 for 34 yards with two throwaways while under pressure.

WRs Jakobi Meyers and N’Keal Harry each had two drops. WR Julian Edelman and RB Rex Burkhead had one apiece.

Edelman and Meyers shared the slot role in the Patriots’ offense. Harry ran just three routes from the slot.

— This was probably Michel’s best game of the season, rushing 20 times for 85 yards. The Patriots went away from the run after he put together an impressive first quarter. He helped kill the clock at the end of the game.

— PFF graded Wynn, LaCosse, Karras and Cannon, who was battling an illness, positively as run blockers.

— Roberts brought pressure on both of his pass-rush opportunities. He also was used as a fullback on four snaps.

— Winovich brought pressure on two of his eight pass-rush snaps.

— Overall, this was perhaps the weakest performance from the Patriots’ pass rush, but it didn’t seem to matter as the defense still flustered Dallas quarterback Dak Prescott.

— Jones gave up a 59-yard catch to Cobb when he got caught up in traffic in coverage. Otherwise, he had a solid game.

— Top Cowboys wide receiver Amari Cooper didn’t catch a pass on two targets. He had one catch reversed on a review. Another catch was negated by a penalty. Gilmore spent most of the day covering Cooper and excelled.

— Prescott completed just 19 of 33 passes for 212 yards with the interception to Gilmore.

— Rookie Joejuan Williams played nine snaps and wasn’t targeted while filling in for Jason McCourty, who was out with a groin injury.

— The Cowboys were able to run the ball pretty well, picking up 109 yards on 26 carries. Clearly, it wasn’t enough for the Cowboys to emerge victoriously. Ezekiel Elliott carried the ball 21 times for 86 yards. Backup Tony Pollard had four carries for 19 yards. Prescott had one 4-yard carry. 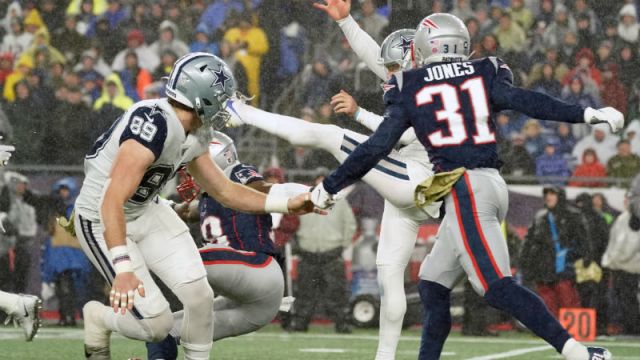 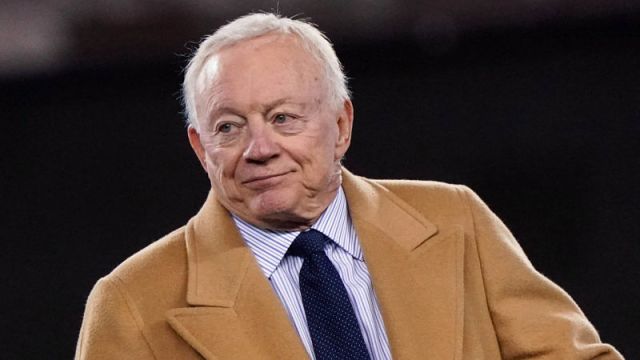