BALTIMORE — Some assorted notes and nuggets from the New England Patriots’ 37-20 loss to the Baltimore Ravens on Sunday night at M&T Bank Stadium:

— Julian Edelman maintained his status as the driving force for the Patriots’ offense with 10 catches on 11 targets for 81 yards. But his lone miscue, which came while New England was attempting a second-half comeback, proved costly.

The Patriots had trimmed an early 17-0 deficit to 17-13 and were driving in the opening minutes of the second half when Edelman caught a short pass from Tom Brady and, while fighting for extra yardage, had the ball ripped from his hands by linebacker Patrick Onuwasor. Cornerback Marlon Humphrey recovered and returned the fumble 70 yards for a touchdown.

SCOOP AND SCORE.@Ravens defense comes up with a HUGE touchdown return ? #RavensFlock

The Patriots responded with a touchdown of their own on the ensuing drive, but Humphrey’s runback proved to be the winning margin. Baltimore closed the game with two eight-plus-minute touchdown drives to put New England away.

“It put us in a hole,” Edelman said of his fumble. “You can’t turn the ball over against a team like that when they can hold the ball for that long. I feel like I let my team down, but you’ve got to move on. It just wasn’t our day. You’ve got to tip your hat to the Baltimore Ravens. They played a good game.”

Multiple teammates voiced their support for Edelman, who leads all Patriots pass-catchers with 63 catches for 663 yards and four touchdowns this season.

“He was just trying to get yards, and they made a good play,” Brady said. “Give them credit. That’s the type of plays good defenses make.”

Added receiver Phillip Dorsett: “Julian’s a warrior. I’d go to war with him 11 out of 10 times. Things happen. It’s football. Everything isn’t perfect.”

— N’Keal Harry was activated off injured reserve and made the trip to Baltimore, but he’ll have to wait at least two more weeks for his regular-season NFL debut.

The first-round draft pick sat out Monday’s game as a healthy scratch, with the Patriots opting to include just four wide receivers (Edelman, Mohamed Sanu, Dorsett and Jakobi Meyers) on their 46-man gameday roster. Receiver/punt returner Gunner Olszewski also was inactive after being listed as questionable ankle and hamstring injuries.

Asked after the game why Harry was not active, Patriots coach Bill Belichick replied: “He was inactive because there were 46 other players active.”

— With Olszewski out, Sanu handled punt-returning duties for the Patriots, getting the nod over Edelman, Meyers and Patrick Chung. The veteran receiver has just one career punt return on his record and didn’t have a chance to actually return one Sunday, as one of Sam Koch’s punts landed out of bounds and the other was downed.

— Cornerback Stephon Gilmore, who spent most of the game chasing speedy Ravens wideout Marquise Brown around the field, sported a wrap on his left pinky finger while addressing the media after the game.

Stephon Gilmore had a wrap on his left pinky finger after the game. pic.twitter.com/kt4TcOyFWA

Brown finished with three catches on four targets for 48 yards, with one of those receptions coming on a jet-sweep shovel pass.

— Tight end Ryan Izzo and defensive end Deatrich Wise dressed but did not play for the Patriots. Meyers played one offensive snap. Edelman, Sanu and tight end Ben Watson all played every offensive snap, and Dorsett missed just one.

Develin has been highly visible since being placed on IR in September, however. He’s traveled to each Patriots road game, using the hours before kickoff to run through a gauntlet of conditioning drills.

Don?t tell James Develin he???s on IR. He just ran through a pregame workout so strenuous that he sweat straight through his hoodie. pic.twitter.com/odAI2gFoQc 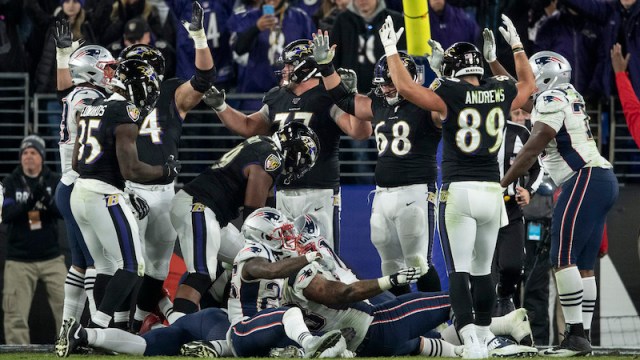 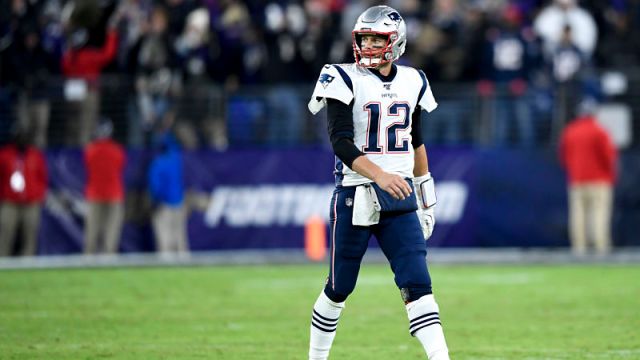 What Tom Brady, Lamar Jackson Told Each Other After Patriots-Ravens