Final, Patriots 34-13: New England punched its ticket to the playoffs for the 11th straight season.

Fourth quarter, 5:11, Patriots 34-13: The blue medical tent is up for cornerback Jonathan Jones, who had to be helped off the field after suffering what initially appeared to be a groin injury.

Fourth quarter, 5:26, Patriots 34-13: After multiple Cincinnati penalties negated a Mohamed Sanu fumble, another ex-Bengal, Rex Burkhead, burst through the line for a 33-yard touchdown run to put this game away.

Fourth quarter, 6:33, Patriots 27-13: The Bengals added a field goal to make this a two-score game, but their drive drained 5:38 off the clock. The Patriots will take that trade-off.

J.C. Jackson provided the latest pick, snagging an overthrown deep ball to Alex Erickson and just barely getting both feet down in bounds.

Third quarter, 4:01, Patriots 27-10: The teams traded three-and-outs after Gilmore’s pick-six. Sony Michel fumbled for the Patriots on third-and-1 but was able to recover.

Stephon Gilmore's second INT of the day is a PICK-6! #GoPats

Gilmore is devouring Tyler Boyd in this game. Boyd’s three targets have resulted in two Gilmore interceptions, including that pick-six.

Stephon Gilmore is the first @Patriots player with multiple pick sixes in the same season since Tedy Bruschi in 2003.

This is also Gilmore's third career multi-interception game and his first with New England. pic.twitter.com/tJsUW9kACh

The Patriots are beginning to pull away.

Third quarter, 11:17, Patriots 20-10: Andy Dalton didn’t target Bengals No. 1 receiver Tyler Boyd once during the first half. We just found out why.

Dalton tried to hit Boyd on Cincinnati’s opening drive of the third quarter and had his pass intercepted by Stephon Gilmore, who needed just one hand to haul in his fifth pick of the season.

With one arm, Stephon Gilmore grabs his fifth INT of the season! #GoPats @BumpNrunGilm0re

The Patriots needed to convert two third downs on the ensuing drive, but Tom Brady was able to find N’Keal Harry in the back of the end zone for a 7-yard touchdown.

Harry initially ran a corner route but turned back toward the middle of the field when Brady stepped up in the pocket to buy time. He evaded cornerback B.W. Webb and made a diving catch.

This easily has been the best performance of N’Keal Harry’s career — and a much-needed one with Julian Edelman (two catches, 9 yards) clearly limited.

Third quarter, 15:00, Patriots 13-10: All of you watching this game at home just missed some high-quality halftime entertainment:

Now back to the real football. The Bengals will receive the second-half kickoff.

Halftime, Patriots 13-10: The Patriots went three-and-out twice on their final possession of the first half, but a muffed punt — forced by Matthew Slater, recovered by Justin Bethel — allowed them to add a field goal just before the break.

Nick Folk just cleared the crossbar from 46 yards out — the longest kick any Patriot has made this season.

Second quarter, 2:05, 10-10:Building off the momentum from their fourth-down stand, the Patriots forced their first three-and-out of the afternoon on Cincinnati’s fourth possession.

Let’s now see if their offensive can find some consistency before halftime.

Tom Brady still is having trouble finding chemistry with his receivers. He’s just 4-for-12 for 32 yards when targeting wideouts thus far.

Second quarter, 7:09, Bengals 10-7: The Bengals kept their offense on the field on fourth-and-inches, and Joe Mixon ran into a wall of Patriots defender led by Danny Shelton. Elandon Roberts and Ja’Whaun Bentley also converged on the spot to help force a turnover on downs.

This was a big stop for New England given the way Cincinnati has moved the ball thus far.

The rookie wideout hauled in an 8-yard catch on third-and-8 and picked up 12 yards on an end-around on the Patriots’ latest possession — all after having a fantastic diving grab wiped away by a false start penalty on Julian Edelman.

That’s the good news for New England. The bad news is the rest of their offense remains stagnant, save for those two nice James White receptions on the opening series.

Julian Edelman appears hindered by his knee and shoulder injuries, and Mohamed Sanu has caught just one of five passes thrown his way thus far. The ex-Bengal ended this latest drive with a drop on fourth-and-4.

First quarter, 0:14, Bengals 10-7: The Bengals already have 96 rushing yards on the day — and an early three-point lead.

New England again had issues containing Cincinnati’s ground game on its second possession before holding the Bengals to a field goal.

First quarter, 5:16, 7-7: Three-and-out for the Patriots. James White dropped a pass on second down, and Tom Brady was drilled as he released a third-down incompletion to Julian Edelman.

First quarter, 6:13, 7-7: The Bengals aren’t backing down. They responded to New England’s opening score with a nine-play, 75-yard touchdown drive of their own.

The first eight plays of that series were rushes, headlined by a highlight-reel 29-yard scamper by Joe Mixon. Andy Dalton capped the drive with an 8-yard touchdown pass to tight end Cethan Carter.

Carter was matched up 1-on-1 against slot corner Jonathan Jones, who has not played up to his usual level in recent weeks.

.@TomBrady floats it to @SweetFeet_White for the 23-yard TD! #NEvsCIN

White also had a 22-yard catch-and-run earlier in the drive, which covered 75 yards in eight plays. Rookie receiver N’Keal Harry was on the field for seven of those plays after playing just two last week.

We’re seeing more varied responsibilities for Harry than we did in his first few games. During the drive, he took a jet sweep for 10 yards, blocked off the wing on a running play and lined up in the slot on multiple snaps. This increased versatility shows the Patriots are gaining trust in their top 2019 draft pick.

First quarter, 15:00, 0-0: The Bengals won the toss and deferred. It’ll be Patriots ball first at we get underway on a chilly afternoon at Paul Brown Stadium.

12:05 p.m.: Mohamed Sanu, N’Keal Harry, Jakobi Meyers and Patrick Chung are returning punts in warmups. Chung was the Patriots’ emergency punt returner in recent years, but he hasn’t been part of that crew this season.

No sign of Julian Edelman just yet. He typically joins the returner group late in warmups.

McCourty is sidelined by a groin injury for the third time in four games. He returned last week but played just four snaps against the Chiefs.

The Patriots will need to designate three more inactives by 11:30 a.m.

Julian Edelman has completed two on-field workouts. It appears he’ll give it a go today after being listed as questionable with knee and shoulder injuries.

8 a.m. ET: Good morning from Paul Brown Stadium in Cincinnati, where the 10-3 New England Patriots are preparing to take on the 1-12 Bengals.

With just three games remaining in the 2019 regular season, the Patriots desperately need a bounce-back performance against a Cincy team that, on paper, clearly is overmatched. New England has lost two in a row and three of its last five after racing out to an 8-0 start.

The Patriots ruled defensive lineman Byron Cowart out for this game as he continues to recover from a concussion. The other six players listed as questionable — including wide receiver Julian Edelman (knee/shoulder) and center Ted Karras (knee) all made the trip to Cincinnati. Inactives for both teams will be announced at 11:30 a.m. ET.

The dominant storyline this week involved a member of the Patriots’ production crew illegally recording the Bengals’ sideline from the press box during last Sunday’s game in Cleveland. The Patriots admitted the staffer violated NFL rules but said the infraction was unintentional — a simple, honest mistake.

It’ll be interesting to see what impact, if any, this controversy has on today’s game. Couple it with the Bengals’ overall lack of on-field talent, and this has the makings of a Patriots rout.

Kickoff is set for 1 p.m. ET. Keep it locked here throughout the morning for full pregame coverage.

With one arm, Stephon Gilmore grabs his fifth INT of the season! #GoPats @BumpNrunGilm0re 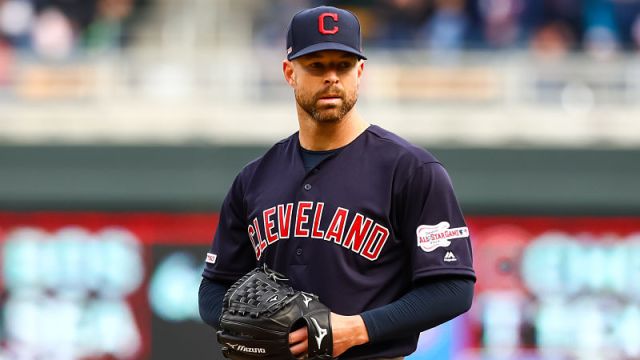 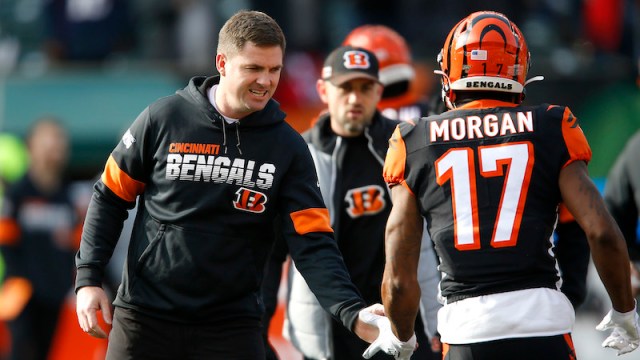