BOSTON — Ninety seconds into Monday’s game against the Los Angeles Lakers, the Celtics found themselves in an 8-0 hole.

But the momentum quickly shifted in Boston’s favor — and the C’s never looked back.

Five different players scored in double figures for the Celtics, three of which (Jayson Tatum, Kemba Walker and Jaylen Brown) scored 20-plus points. Enes Kanter continued his recent success with yet another double-double, notching 18 points and 11 rebounds in 24 minutes.

The Celtics even made a little history. Monday’s win was the C’s largest regular-season win over the Lakers since 1963.

The Celtics' 32-point win over the Lakers is their largest regular-season win in the series since 1963.

It's their largest win over the Lakers, regular season or postseason, since beating them 131-92 in Game 6 of the 2008 NBA Finals. pic.twitter.com/qwEbEUoiGt

Boston entered the game having lost six of its last eight games. So, as head coach Brad Stevens noted, this was a much-needed win.

“We were fortunate to put the ball in the basket quite a bit, but we really competed on both ends. That was good. It’s good to be as close to full as we’ve been (this season) from a health standpoint. I’m hoping that we can maintain that and build off of it.”

The Lakers, on the other head, weren’t nearly as pleased with their performance. Even getting Anthony Davis (who posted nine points, three rebounds and two assists in 23 minutes) back from injury didn’t help L.A.’s cause.

“I just credit the Celtics,” Vogel said, per a team-provided transcript. “… We have been remarkably consistent throughout the year, even when we haven’t played well. We find a way to stay in games and make it a game late and compete. (The Celtics) were able to sustain their aggression. They were the aggressors early in the game and then throughout the game, and we just didn’t have it tonight.”

The Lakers have a chance to redeem themselves, however, when the Celtics visit Staples Center on Feb. 23.

Here are some more notes from Monday’s Celtics-Lakers game:

— The injury bug didn’t seem to bother Walker or Brown during the game.

Walker missed Saturday’s loss to the Phoenix Suns due to soreness in his left knee, while Brown missed the last two with a sprained right thumb. The pair didn’t seem fazed, however, posting 20 points apiece.

Brown said he was in a bit of pain entering the game, but that it subsided as the adrenaline set in.

Afterward, however, Brown said, “I feel it now, though.”

— Next up on the Celtics’ schedule: the Grizzlies.

Boston will welcome Memphis to town Wednesday, with tip-off from TD Garden slated for 7:30 p.m ET. 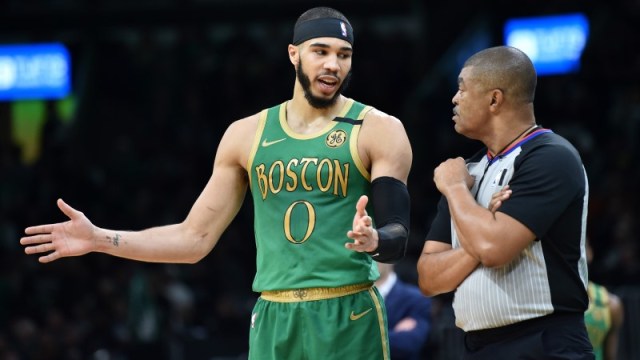 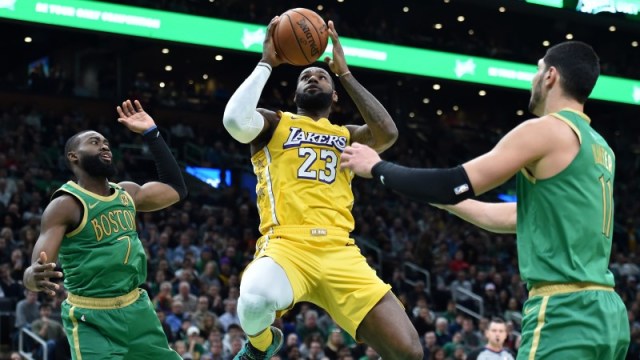