The Bruins are on a roll right now.

Boston currently finds itself amidst a four-game win streak, padded by its 4-0 victory over the Vancouver Canucks on Tuesday at TD Garden. The Bruins have found plenty of success since the NHL All-Star break, winning their first three games following the nine-day layoff.

Whether it’s a flashy performance like their 6-1 win over the Minnesota Wild on Saturday or a gritty effort like Friday’s victory over the Winnipeg Jets, the Black and Gold continue to find ways to win. A few tweaks to the lineup here and there to create a little “internal competition” appear to have had a positive effect on Boston’s game.

Torey Krug lauded the team for winning games on “both ends of the spectrum” after Monday’s practice, something he hoped the team would continue to “embrace” down the stretch. And so far, he’s getting his wish.

Clearly, things are clicking for the Bruins. And considering where they were before the All-Star break, that’s a major improvement.

So, what’s changed for the Bruins? Allow Bruce Cassidy to explain.

“I think three or four games before the break, I think it was well-documented we wanted to create a little competition. We didn’t feel we were getting the best out of everybody,” Cassidy told NESN’s Jack Edwards and Andy Brickley after the game, as seen on NESN’s postgame coverage. “Part of that’s on the players, part of that’s on the staff to make sure they do. So this was a way we thought we could sort of tweak some guys and get their attention, and whether that’s worked or not, I mean, that’s for other people to decide. But I feel it has created a little internal competition. Guys are a little more excited to play now, a little more honored to wear the sweater every night and the efforts (have) shown that.”

Tuukka Rask thinks the Bruins’ latest efforts are “a sign of a good team.”

“You could sense a little mental fatigue there before the break,” the Bruins netminder said on NESN’s postgame coverage. “Obviously it was a long grind, a lot of games, so the break helped that mentally and now (it seems) like we’re sharp physically and mentally. I think the mental aspect of it plays a huge part too going forward.”

Here are some more notes from Tuesday’s Bruins-Canucks game:

— Rask had himself quite the night.

The Bruins goaltender pushed away all 25 shots he faced Tuesday night for his third shutout of the season. His home point streak now sits at 17 games — tying a franchise record set by Gilles Gilbert in the 1970-71 season.

Only nine other goalies have recorded at least one point in their first 17-plus home games from the start of a season, according to NHL Public Relations.

Only nine other goaltenders in NHL history have recorded at least one point in each of their first 17+ home appearances from the start of a season. #NHLStats pic.twitter.com/p5MAG9j1tI

— Things got a little confusing in the first period.

Charlie Coyle scored the first goal of the game late in the first period, flicking one past Jordan Markstrom for his 10th of the season. But the Canucks challenged it’s validity, arguing the play had been offside beforehand.

But the league disagreed.

“It was determined that Bostonâ€™s Sean Kuraly legally tagged up at the blue line prior to Charlie McAvoy entering the offensive zone and touching the puck,” the league said, via NHL.com.

— The Bruins have themselves a quick turnaround as they ship off to Chicago for a Wednesday night tilt against the Blackhawks. Puck drop from United Center is slated for 8 p.m. ET. 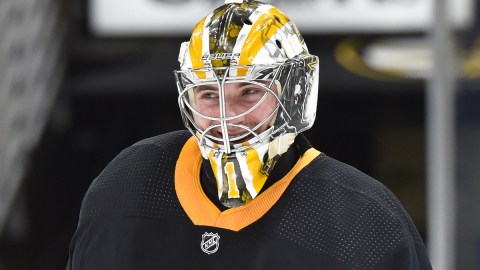 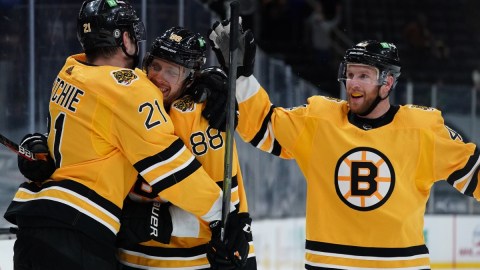