The Boston Bruins now know what their roster is going to look like for their looming playoff run.

The NHL trade deadline has passed, and when the dust settled, the Bruins had made a pair of moves. On Friday, the Bruins acquired Ondrej Kase from the Anaheim Ducks for David Backes, Axel Andersson and a 2020 first-round pick. Then, they worked with the Ducks again Monday, swapping Danton Heinen for Nick Ritchie.

Kase was at Bruins practice Monday afternoon, unsurprisingly playing on the second line with David Krejci and Jake DeBrusk. But with Ritchie now in the fold and Heinen out, how might things start looking?

A nice byproduct of the Kase deal is the Bruins shed 75 percent of Backes’ cap hit. They also saved about $1.3 million in going from Heinen to Ritchie. With rosters set to expand, the Bruins only have to worry about being cap compliant and not about how many guys are on the roster. That means they don’t need to force Jeremy Lauzon or Karson Kuhlman down to Providence simply because they are waivers eligible and Boston needed to clear a roster spot or put a guy like Anton Blidh on waivers.

The Bruins will play the Calgary Flames on Tuesday at TD Garden in their first game following the trade deadline. Bruins general manager Don Sweeney indicated he wasn’t sure if Kase will play (he’s been dealing with flu-like symptoms), but he expects Ritchie to suit up. 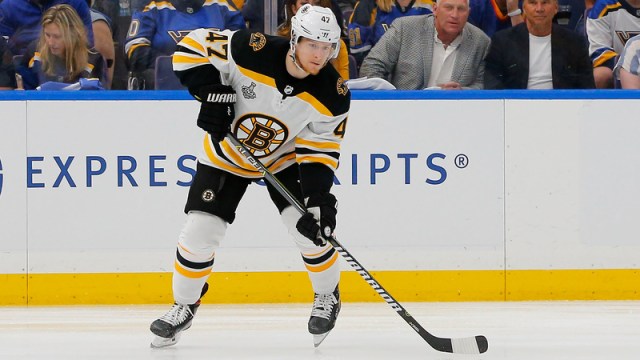