Final, Chiefs 31-20: For the first time in 50 years, the Kansas City Chiefs are Super Bowl champions.

Trailing by 10 points with less than seven minutes remaining in the fourth quarter, the Chiefs scored touchdowns on each of their final three meaningful possessions to knock off Jimmy Garoppolo and the San Francisco 49ers in Super Bowl LIV at Hard Rock Stadium.

Running back Damien Williams provided each of the final two touchdowns, including the game-winner with 2:44 remaining.

Super Bowl MVP Patrick Mahomes played below his usual superstar level for stretches and threw interceptions on back-to-back drives in the second half, but the quarterback keyed the Chiefs’ comeback with two touchdown passes and several clutch throws in the final seven minutes. Mahomes also rushed for a score in the first quarter.

Garoppolo, playing in his first Super Bowl after winning two as a New England Patriots backup, completed 20 of 31 passes for 219 yards and one touchdown with two interceptions in a losing effort.

The Super Bowl victory was the first of Andy Reid’s coaching career. He previously lost to the Patriots as head coach of the Philadelphia Eagles in Super Bowl XXXIX.

The Chiefs erased double-digit deficits in each of their three playoff games and reeled off nine consecutive wins to close out the season.

Patrick Mahomes drove the Chiefs 65 yards in seven plays to erase what had been a 10-point Niners lead and put the Chiefs ahead for the first time since the second quarter.

Sammy Watkins beat Richard Sherman deep for a 38-yard gain, then Mahomes found Damien Williams for a 5-yard score on third-and-goal. Kansas City has overcome double-digit deficits in all three of their playoff games.

THE @CHIEFS TAKE THE LEAD!

All the pressure now falls on Jimmy Garoppolo and the 49ers’ offense. They have all three timeouts remaining and need a touchdown.

Fourth quarter, 5:10, 49ers 20-17: Jimmy Garoppolo had a pass batted at the line on second down and got walloped on third down. Three-and-out. Niners punt.

Patrick Mahomes now has a chance to give the Chiefs the lead.

One play after a 16-yard completion to Tyreek Hill was challenged and overturned, Patrick Mahomes hit a wide-open Hill deep for 44 yards on third-and-15.

Travis Kelce followed that up by drawing a defensive pass interference call in the end zone, then catching a 1-yard touchdown pass one play later.

Hold on to your butts. This one is going down to the wire.

Fourth quarter, 8:53, 49ers 20-10: Big series by the Kansas City defense. The 49ers picked up just one first down before punting the ball back to Patrick Mahomes.

Fourth quarter, 11:57, 49ers 20-10: After not turning the ball over at all in his first four playoff games, Patrick Mahomes now has thrown interceptions on back-to-back possessions.

His latest pick came on a throw that was behind Tyreek Hill. Hill got his hands on the ball but managed only to deflect it into the waiting arms of safety Tarvarius Moore.

MOORE OF THAT!! @tarvarius2 with the pick ?#SBLIV x #BeLegendary pic.twitter.com/qDbex3BFp6

The interception killed what had been a productive Chiefs drive. Mahomes faced heavy pressure from the Niners’ fearsome defensive line and was sacked once by DeForest Buckner, but he drove Kansas City to the Niners’ 23-yard line before his costly miscue.

His last game with multiple INT was 440 days ago.#SBLIV | #SuperBowl

A 49ers touchdown here could put this one out of reach, even for a comeback artist like Mahomes.

Ever since his early interception, Jimmy Garoppolo has been surgical for San Francisco. He’s completed 17 of 20 passes for 183 yards and a touchdown thus far.

Mahomes evidently failed to spot linebacker Fred Warner on a pass to Tyreek Hill. The throw went directly to Warner, who had Hill blanketed and was surrounded by five other Niners defenders.

The @49ers get an interception of their own!@Fred_Warner comes up with the takeaway. #GoNiners

One play earlier, Nick Bosa nearly forced a turnover of his own when he swatted the ball out of Mahomes’ hand.

San Francisco now has an opportunity to take a two-score lead as time winds down in the third quarter.

A 14-yard gain on yet another end-around gave the 49ers rookie wideout 53 rushing yards on the night, the most ever by a wide receiver in a Super Bowl.

Deebo Samuel has 91 of the 49ers' 211 yards from scrimmage on seven touches. Causing all sorts of havoc with the ball in his hands.

The Niners also got another chunk play out of fullback Kyle Juszczyk, who followed up his second-quarter touchdown with a 14-yard catch-and-run. San Francisco moved to the edge of Kansas City’s red zone before settling for a 42-yard Robbie Gould field goal.

Halftime, 10-10: That decision by Kyle Shanahan will be heavily scrutinized if the 49ers lose this game.

Shanahan declined to use one of his three remaining timeouts as Kansas City lined up to punt the ball back to San Francisco in the waning minutes of the first half, allowing the Chiefs to drain roughly 40 seconds off the clock.

Just 59 seconds remained in the half when the Niners took over at their own 25-yard line. They picked up 20 yards on a third-down strike to Jeff Wilson Jr., but after a bomb to George Kittle was called back due to offensive pass interference, Jimmy Garoppolo took a knee to run out the clock.

The receiver extends his arm and creates separation while the ball is in the air, therefore it is offensive pass interference. ? AL#SBLIV pic.twitter.com/hxAvggDqhS

The 49ers will receive the second-half kickoff.

Second quarter, 5:05, 10-10: The 49ers began leaning into their run game on their latest possession, and it paid off.

Runs of 9 and 11 yards by Raheem Mostert — who hadn’t touched the ball until this drive — another of 17 yards by Tevin Coleman and a 16-yard Deebo Samuel catch-and-run off a quick pop pass marched San Francisco downfield. Jimmy Garoppolo capped the drive by rolling to his right and finding fullback Kyle Juszczyk for a 15-yard touchdown.

The Harvard product broke one tackle at the 11-yard line before diving across the goal line.

FULLBACK TOUCHDOWN IN THE SUPER BOWL.@JuiceCheck44 stays on his feet for the TD reception! #GoNiners

Second quarter, 9:32, Chiefs 10-3: The Chiefs turned Jimmy Garoppolo’s interception into three points, hitting on a 28-yard heave to Sammy Watkins and converting on a fourth-and-1 in the red zone.

It was Kansas City’s second such conversion in this game. Andy Reid’s aggressive decision-making is paying off thus far.

Reid brought the field-goal unit out after the Niners forced an incompletion on third-and-7, however, and Harrison Butker booted one through from 31 yards out.

Facing heavy pressure from Chris Jones and Mike Pennel, Garoppolo heaved a desperation pass in the general direction of Deebo Samuel. Instead, he found Chiefs cornerback Bashaud Breeland, who turned the ill-advised throw into an easy interception.

Stonecold and Big Mike with the pressure, Breezy with the pick ? pic.twitter.com/9G79wL3jyV

First quarter, 0:28, Chiefs 7-3: After a shaky start, the Chiefs’ offense found its groove on its second possession.

Kansas City picked up 20 yards on two quick strikes to Travis Kelce, but running back Damien Williams did the bulk of the damage, rushing for four first downs, including one on fourth-and-1 from inside the 5-yard line that came off a nifty play design by Andy Reid.

Andy Reid actually pulled this play in the Super Bowl.

Led to a Patrick Mahomes tocuhdown with a keeper. pic.twitter.com/llIq6L0z6U

That fourth-down conversion came after 49ers safety Jimmie Ward leveled Patrick Mahomes on a scramble, forcing a fumble that pushed Kansas City back after Mahomes had picked up first-down yardage.

QB1 gets us on the board! pic.twitter.com/AEbaGOs5Sw

Oh, and we now know what Tom Brady’s cryptic tweet from earlier this week was all about. It was a teaser for a (admittedly clever) Hulu commercial that just aired on FOX’s broadcast. The Patriots quarterback ends it with the words: “I’m not going anywhere.”

Tom Brady has a big announcement about his future… pic.twitter.com/0dD7XrnnHB

First, Samuel picked up 32 yards off an end-around that showcased head coach Kyle Shanahan’s love of misdirection. Then, he dashed through the gap in the middle of Kansas City’s defense on an aborted wide receiver pass to pick up 7 yards on third-and-2.

He gone!! ?@19problemz takes off for 32. #BeLegendary pic.twitter.com/kDJEuMJpZ0

Worth noting for Patriots fans: Samuel was drafted four picks after N’Keal Harry this summer. He’s been a major offensive contributor for the Niners in his first pro season.

First quarter, 13:55, 0-0:  Superb start for the 49ers defense, which forced a three-and-out to open the game. Heavy pressure off the edge from Nick Bosa produced a third-down pass breakup.

First quarter, 15:00, 0-0: The 49ers won the coin toss and deferred. Patrick Mahomes and the Chiefs will play offense first in front of an extremely pro-Kansas City crowd here in Miami.

The @49ers win the toss and elect to defer.

The @Chiefs will take the ball to start the game.

6:20 p.m.: The NFL 100 All-Time Team was just recognized during a pregame ceremony that featured a host of current and future Patriots.

Belichick soaked up his moment in the spotlight, smiling and flashing his Super Bowl rings in response to boos from the Hard Rock Stadium crowd.

Moment of silence held for Kobe and the other crash victims, as well as Hall of Famer Chris Doleman, who died of cancer this past week. pic.twitter.com/IXPjJPgZ62

5:38 p.m.: The Patriots failed to reach the Super Bowl this season for the first time since 2015, but the franchise’s Big Three made the trip to Miami regardless.

Tom Brady, Bill Belichick and Robert Kraft all are in attendance tonight.

Despite New England’s absence from this year’s game, Brady’s future was a major topic of discussion and debate throughout Super Bowl week. The 42-year-old quarterback is set to hit free agency for the first time in his storied career March 18 if he and the Patriots do not come to terms on a contract extension before that point.

The six-time Pro Bowler fell out of favor in the Chiefs’ offense down the stretch. He played just one snap in the divisional round and was inactive for the AFC Championship Game, and reports circulated Saturday that he was unlikely to suit up tonight. He’s a healthy scratch.

Here are the #Chiefs official inactives for #SBLIV:

4:20 p.m. ET: Greetings from Hard Rock Stadium in Miami Gardens, Fla., where the Kansas City Chiefs and San Francisco 49ers are preparing to square off in Super Bowl LIV.

Patrick Mahomes and the Chiefs are seeking their first championship in 50 years and the first of head coach Andy Reid’s impressive NFL career. They trailed by double digits in each of their first two playoff games but rallied to win both with relative ease.

Jimmy Garoppolo and the 49ers are looking to cap a remarkable turnaround in Year 3 of the Kyle Shanahan era. After winning just four games last season, San Francisco went an NFC-best 13-3, then used its bulldozing run game to plow through the Minnesota Vikings and Green Bay Packers in the postseason.

Kickoff for what should be a highly entertaining Super Bowl matchup set for 6:30 p.m. ET. Keep it locked here throughout the night for full coverage from Miami. 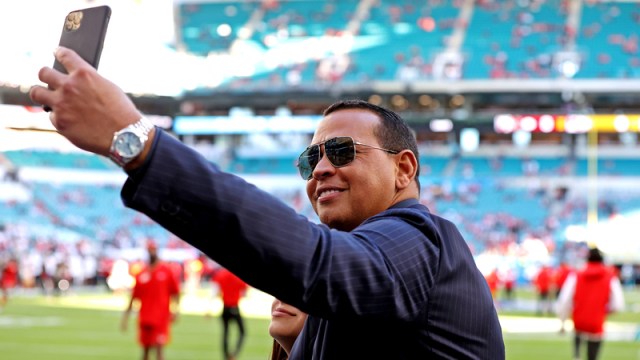 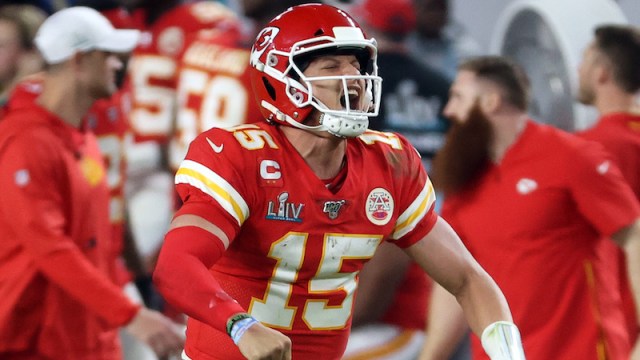