Tom Brady has earned the right to make this very difficult decision after everything he’s given the New England Patriots organization. Still, it seems shortsighted to leave the Patriots after 20 years.

The Patriots wouldn’t give Brady what he wanted, whether that was money, the promise of offensive weapons or simply appreciation. And now he’s gone. To where? The Los Angeles Chargers? The Tampa Bay Buccaneers? Somewhere else? For what?

Does Brady want to prove he can win without head coach Bill Belichick? And if he does, does it really matter? Brady is already considered the greatest quarterback of all time. Sure, there are always some people who will call him a system quarterback or credit his success to Belichick. And their opinions don’t really matter. They’re trolls.

It certainly would be an interesting story if Brady wound up winning a Super Bowl with another franchise. But if it’s one of the teams being mentioned, then who’s really going to appreciate it?

Brady now faces an extremely difficult path as a soon-to-be 43-year-old quarterback. He must acclimate to a new team with new teammates with an uncertain NFL future. NFL teams might not even have an offseason workout program because of concerns surrounding the coronavirus. Offseason start dates of April 6 and April 20 have already been delayed because of COVID-19.

So, when and how will Brady learn his new offense or install his own system? When will he get to work with his new set of wide receivers and tight ends? What happens if training camp and the preseason are truncated, as well? It’s all an uphill battle worse than anything he ran during Patriots training camp.

And if Brady gets out to a slow start with his new team after signing a massive contract, what happens then? It’s not as if the fanbases of 31 other franchises are indebted to TB12. In fact, they don’t like him very much. They’ve called him and his organization cheaters for the past 13 years or so. And sure, another fanbase will get on board after Brady signs, but they also know it’s going to be a short marriage before an inevitable divorce when Brady and his family will move back to New York or Connecticut for good to run TB12 and 199 Productions.

While it seems like Brady isn’t seeing the forest for the trees with this decision to leave New England, he probably is thinking of all of these factors. And he’ll likely try to feed off of it. Brady will use anything to deepen the chip in his shoulder. And we’re certainly not counting Brady out. If anyone can overcome everything written above, it would be Brady. But wouldn’t a return to the Patriots have been easier for all parties involved?

Now the Patriots must find a new quarterback with limited salary cap room. And if they elect to roll with inexpensive 2019 fourth-round pick Jarrett Stidham, then they don’t have a lot of money to surround him with offensive weapons.

By the end of the Brady saga, it would have been surprising for Brady to leave or stay. We’re flabbergasted now because it’s difficult to imagine a Patriots team without Brady or the QB in a different uniform. And it would have been shocking to see him stay because it felt like the Patriots had moved on Monday when they used up their cap room on Patriots free agents not named Tom Brady.

Opinions in New England will undoubtedly split with Brady gone. There will be Patriots fans, Brady fans and some amalgamation of both who cheer for two franchises at once.

It’s going to be a bizarre 2020 NFL season with Brady moving on. And everything is on the table for the Patriots and Brady as they part. You could tell me either party will win a Super Bowl or finish last in their respective divisions. Anything is possible after Tuesday’s announcement. 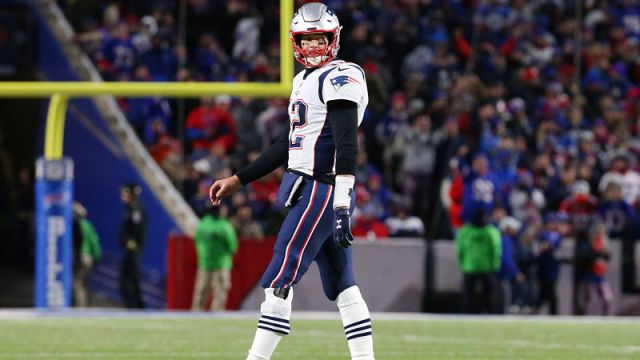