The New England Patriots have added six outside free agents since the new league year opened last Wednesday. Let’s get to know them:

Speed, speed, speed. That’s what Byrd will bring to the Patriots’ receiving corps.

In college at South Carolina — where he overlapped with Pats cornerback Stephon Gilmore for one season — Byrd played football and ran track, posting the fourth-fastest 55-meter dash time in school history and the sixth-fastest 60-meter time. At his pro day in 2015, he ran the 40 in 4.28 seconds.

That blazing time wasn’t enough to get him drafted, and he did little of note during his first four NFL seasons, totaling 12 catches for 129 yards and two touchdowns in 17 appearances for the Carolina Panthers. Byrd battled multiple injuries during this span, including two broken arms, and it took a change of scenery for him to finally find his groove. He enjoyed a career year while catching passes from Kyler Murray in Arizona last season, serving as the Cardinals’ third receiver behind Larry Fitzgerald and Christian Kirk.

Byrd also returned a kickoff 103 yards for a touchdown in 2017 and has punt return experience, as well.

Allen projects as a 1-for-1 replacement for Danny Shelton as a two-down player who’s best-suited for run defense.

The Wisconsin product capped a four-year stint in Philadelphia with a win over the Patriots in Super Bowl LII, then played the last two seasons in Tampa Bay. He started eight of the 14 games he played in 2018, but his playing time plummeted following Ndamukong Suh’s arrival last offseason, dropping from 37 percent of defensive snaps to 16 percent. He should see more opportunities in a Patriots defense that was light on depth up front even before Shelton left for Detroit.

Allen also has hair that rivals Chase Winovich’s, and he seems like a funny guy. This interview he did with ex-Patriots defensive end Chris Long — during which Allen explains his “Butter King” nickname — is worth a watch:

Phillips, who came aboard one day after New England traded Duron Harmon to the Lions, played all over the field for the Los Angeles Chargers, rotating among strong safety, free safety and linebacker. He won’t replace Harmon’s deep coverage skills, but his talents as a safety/’backer hybrid should take some of the load off Patrick Chung, who’s been beaten up by injuries in recent years.

“When you watch him when he was on the Chargers — linebacker, strong safety, free safety — he did so many different things,” safety Devin McCourty said Sunday night on his “Double Coverage” live stream. “We don’t exactly know how he’ll fit, but he’ll bring another dimension that will be a little different for the defense. I’m excited about it.”

A broken arm sidelined Phillips for half of last season, but he had a banner year in 2018, racking up 94 tackles, an interception and nine passes defended while playing 66 percent of LA’s defensive snaps. He also was an elite threat in the kicking game, earning Pro Bowl and first-team All-Pro honors as a special teamer. He’ll help fill the void created by Nate Ebner’s departure.

“He’s extremely intelligent,” Chargers defensive coordinator Gus Bradley told reporters in December 2018. “He can play strong safety, free safety, dime and nickel for us, and we’d feel extremely comfortable if he was in any of those positions. So that intelligence (is impressive). He’s got a football IQ that is, to say compare him to anybody, he’s just one of the most elite guys in that area that I’ve ever been around.”

Phillips has an inspiring story, too. After going undrafted out of Texas in 2014, he was cut eight times — all by the Chargers — in his first two NFL seasons before finally sticking. That’s perseverance.

Vitale’s signing immediately prompted questions about James Develin’s status, as it remains unclear when or if Develin will be able to return from the neck injury that ended his 2019 season. If Vitale is the Patriots’ new top-choice fullback, he’ll bring a new, more athletic edge to the position.

“In a non-disrespectful way, he’s surprised all of us with his athleticism,” Green Bay Packers quarterback Aaron Rodgers told reporters last summer. “You look at him sometimes, you think, meathead, weight-room guy. But you realize he can run, he can catch, he can read coverages.”

Having played a form of H-back that Northwestern called “superback” in college, he’s much more skilled as a pass-catcher than the lumbering Develin, whose greatest strength is his ability to bulldoze defenders. In four years for the Wildcats, he caught 135 passes for 1,427 yards and 11 touchdowns.

Vitale’s NFL employers haven’t utilized him much in that capacity — he has 15 career catches in four pro seasons, two with the Cleveland Browns and two with the Packers — but it’s safe to assume Patriots offensive coordinator Josh McDaniels, who frequently split Develin out wide to exploit mismatches, will dial up some creative looks to get Vitale involved.

Rodgers and Vitale connected on three completions of 20-plus yards last season.

The Patriots’ first step toward reloading their depleted linebacking corps was signing Copeland, who spent the last two seasons with the rival New York Jets.

Copeland played almost exclusively on the edge in 2018 and was one of New York’s top pass rushers, bagging five sacks and ranking third on the team with 38 total pressures, per Pro Football Focus. His role changed in 2019, with new coordinator Gregg Williams primarily positioning him off the ball, and his pass-rush opportunities dried up. After rushing the quarterback 357 times in his first year in New York, he did so just 57 times last season, per PFF, logging seven total pressures.

Copeland will be a prime candidate to slide into Kyle Van Noy’s outside linebacker spot. The Patriots also lost Jamie Collins and Elandon Roberts in free agency last week.

Before joining the Jets, Copeland, spent time with the Baltimore Ravens, Tennessee Titans and Detroit Lions. He missed the 2017 season with a torn pectoral muscle and was suspended for the first four games of 2019 following a positive PED test.

Off the field, he’s renowned for his philanthropy, earning the NFLPA’s prestigious Alan Page Community Award earlier this year. He also holds degrees from Penn and the Wharton School.

Prioritizing knowledge of McDaniels’ system in an offseason that could have an abbreviated or nonexistent practice schedule, the Patriots brought Hoyer back for a third tour of duty after the Indianapolis Colts cut him loose. The journeyman’s ceiling is low at this point in his career, but he has plenty of starting experience and can serve as a passable stopgap if Jarrett Stidham struggles this summer.

Having Hoyer’s veteran voice in the room should help Stidham, too, as the 2019 fourth-round pick enters his second pro season. The two already know each other well after duking it out for the top backup spot behind Tom Brady last year — a battle Stidham ultimately won.

“I can’t speak highly enough about Brian,” Stidham said after winning the job. “He really helped me a ton, especially when I first got here and got going in OTAs and minicamp and all that kind of stuff. He was here every day for me and helping me in every way that he could. He’s a true veteran, a true pro, and I couldn’t be more thankful for him.”

An ideal situation for the Patriots would involve Stidham easily winning the starting job, Hoyer or Cody Kessler backing him up and a 2020 draft pick taking a de facto redshirt as the third QB. 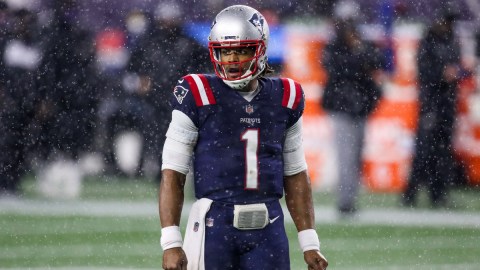