Some professional sports leagues in the United States have paused their respective seasons due to the COVID-19 outbreak, but the WNBA is forging ahead with its 2020 Draft nonetheless.

The event will be held virtually, with commissioner Cathy Engelbert announcing selections remotely, while players take part from the safety of their own homes. Select players will join ESPN’s Ryan Ruocco, who will broadcast from Bristol, Conn., as well as Rebecca Lobo and Sue Bird after being chosen, as the league experiments with a new virtual setting.

But just who will be selected in Friday’s draft, and when?

While we wait for the official answer to that question, we’ve taken our best stab at predicting how the first round will pan out in our 2020 WNBA Mock Draft.

Here’s a look at our predictions for Round 1:

1. New York Liberty — Sabrina Ionescu, G, Oregon
Surprise, surprise. Were you expecting anyone else in this position? This Oregon product has some serious promise, so we have no doubt she’ll be selected first overall. And surely, a few training sessions with Kobe Bryant really have paid off for the 22-year-old stud as well.

2. Dallas Wings — Satou Sabally, F, Oregon
Another fairly obvious choice in our eyes. And if her impressive rebounding abilities (6.9 boards per game) aren’t enough, just look at her ability to hit shots from beyond the arc (45 percent in the 2019-20 season). What’s not to love?

3. Indiana Fever — Lauren Cox, F/C, Baylor
It’s a tight field this year, but we think Cox has the stuff to earn herself the No. 3 pick. Thought injuries haven’t been her friend in recent years, the 6-foot-7 center has the frontcourt presence the Fever is looking for as Indiana continues to restructure its promising squad.

4. Atlanta Dream — Chennedy Carter, G, Texas A&M
The Dream sure could use a big scorer. And though they picked up ex-Connecticut Sun players Shekinna Stricklen and Courtney Williams in the offseason, Carter’s scoring touch would be a great addition to the promising franchise. Nab her, and Atlanta could have themselves an even more dynamic squad in 2020.

5. Dallas Wings — Tyasha Harris, G, South Carolina
Teams looking for a little leadership, like the Wings, should look no further than Harris. Her defensive prowess is something to be desired as well, making her a great all-around package for anyone lucky enough to score her talents.

6. Minnesota Lynx — Megan Walker, F, UConn
Several teams will have their eye on Walker in the first round, but we think the Lynx will be the ones to pounce on the 21-year-old UConn product. Walker is one of the more dynamic shooters in this year’s draft, averaging 19.7 points per game and shooting 45.1 percent from beyond the arc this season.

7. Dallas Wings — Bella Alarie, F, Princeton
Alaire is a bit of a dark horse in this year’s draft. If her size (6-foot-4) isn’t attractive enough for prospective teams, her versatility in the post certainly will do the trick. Though she has a bit of sharpening to do on her outside shot, she could be a promising selection for a rebuilding Wings team.

8. Chicago Sky — Beatrice Mompremier, C, Miami
Considering the Sky don’t appear to have any particular needs heading into the draft, this one is a bit of a toss-up. But we think Mompremier could add just the right spark to the already-dynamic squad, though a lingering foot injury could impact her value in the draft.

9. New York Liberty — Ruthy Hebard, F, Oregon
New York has the chance to land quite a few gems in the first round, and we believe Mompremier could be one of them. The 6-foot-4 forward is expected to go early in the draft thanks to her unique offensive abilities. And with three picks in the first round, its hard not to see the Liberty take a chance on Hebard, especially considering the team’s current hole at power forward.

10. Phoenix Mercury — Mikiah Herbert Harrigan, F, South Carolina
After losing two studs in DeWanna Bonner and Briann January this offseason, the Mercury are in desperate need of some help on the offensive end. Harrigan could be a solid addition to the squad with her consistency and gritty game-play, something Phoenix could use if it wants to return to playoff contention.

11. Seattle Storm — Te’a Cooper, G, Baylor
This one could be quite the gamble, but Cooper could play a unique roll on the Storm’s roster. Her 3-point shot is sharp, her backcourt presence is strong and she has battled plenty of adversity after playing for three different colleges. It could be a shot worth taking, no pun intended.

12. New York Liberty — Crystal Dangerfield, G, UConn
In our humble opinion, it’s hard to imagine Dangerfield won’t be selected in the first round. Her biggest disadvantage? Her 5-foot-5 stance. But we still think the UConn product could go in Round 1, and the Liberty very likely could be the team to scoop her up. 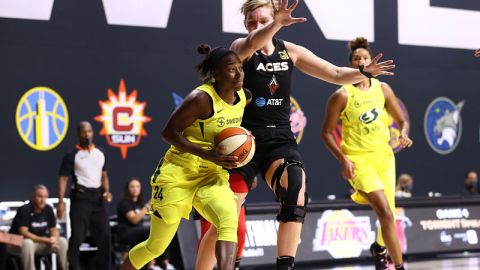 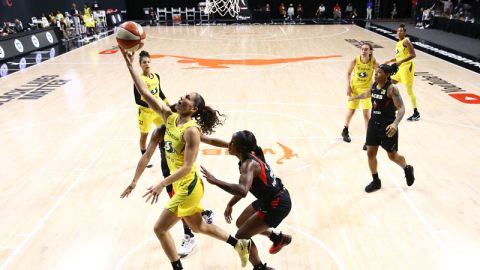