Someone who helped mold Erling Haaland into one of soccer’s hottest properties hopes his future will be Red.

Alf Ingve Berntsen, who was Bryne FK’s head coach in 2016 when Haaland debuted as a first-team professional, urged the Norwegian striker to take his talents to Liverpool at some point in his career. Berntsen readily admits his partisan reason for offering Haaland such advice.

“I’m a fan of Liverpool, so of course I would like to see him play for them,” Berntsen told 90Min on Monday. “English football is by far the most popular in Norway. And most young Norwegian footballers dream of playing in the Premier League, as did Erling’s father. I sincerely believe that he has the skills to play at such a club.”

Haaland currently plays for German club Borussia Dortmund, whom he joined during the January transfer window from Austria’s Red Bull Salzburg. He has taken Germany’s Bundesliga by storm, scoring nine goals in his first eight games in one of Europe’s major leagues. He also has netted 10 goals in eight UEFA Champions League games for Salzburg and Dortmund.

As world soccer’s most heralded young goal scorer at the moment, Haaland, 19, likely would command a high-eight or perhaps nine-figure transfer fee for his next move.

Although none of the leading media outlets have sourced a rumor linking Haaland to Liverpool, the Reds’ status as reigning Champions League winners and Premier League champions in-waiting puts them among the few clubs that would represent a forward step in his career.

Liverpool’s interest in Haaland is uncertain, but the coach who gave him his first-team debut has made his feelings known. 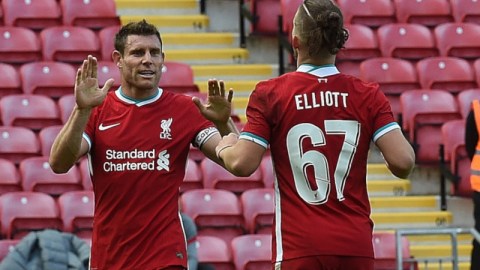